Schedler 3 inch globe, I love the small ones

I just can't get enough of small globes.  Certainly it's a space issue, my study is fast filling and I'm starting to get dirty looks from my better half.   Anyhoo today I received in the mail a beautiful Schedler 3 inch globe mounted plainly on an iron stand.    Now looking at this picture you've got see past on he warts,  there's an issue with the axis, it's just not sitting right and the shellac is dark, very dark in fact. But look closer there's a lot of great colors coming through that dirty shellac, and for these 2 reasons I'll be sending this little gem off to Green Dragon Bindery for some TLC.

So lets go over a few details about this globe, it's a 3 inch orb, cast iron base, and stands a total of only 5 inches high.  Under that  dark shellac is a quite detailed map surface.   I'm going to  cross my fingers that conservation goes well,  I have a picture of a completely restored version of this globe t5hat was sold several years back by a European dealer so that the potential is there.

here you can see just what I hope to find lingering under that darkness, I'll be certain to update  once work is completed.  Now there's no guarantees with any restoration project but I'm going to be an optimist.  I was quite fortunate to have secured a copy of the original Schedler globe manual and catalog to accompany this small globe they make a nice set for sure,  I can't recall ever seeing this globe manual for sale publicly. 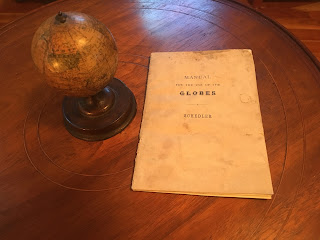 I have been trying to find  nice Schedler globe to add to my collection for a number of years and usually the condition these globes are found in gives me pause.    Schedler globes I am told are notorious for condition issues relating to the orbs.  It seems that they skipped the plaster overlay step in a cost saving move and instead laid paper gores right down to pressed wood, or wood substrates and the acid in the wood led to discoloration of the paper.  We won't know if this globe has suffered that fate until the shellac is off. Either way this little gem will be enjoyed. 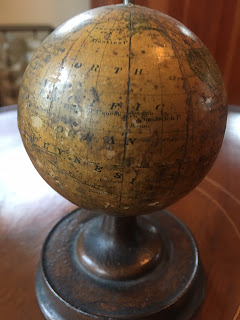 UPDATE:  7/20/2020,  the results are in  my little Schedler globe is back from it's visit to the Green Dragon Bindery and I think things have improved greatly.    Below you will see two pictures of the globe in it's fresh state of presentation.  Three things were done to improve this globe.
1. The axis rod was re-set properly it is no longer protruding it is now flush as intended.
2.  The old dark shellac was removed and this small globe was re-coated with shellac,  notice that the general appearance is much brighter and clearer, yes there are some dark spots remaining such is life with a Schedler globe, the original manufacturing process is the culprit.
3. A new bushing was fit in the base so that the globe will spin freely and correctly. 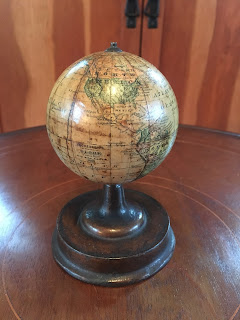 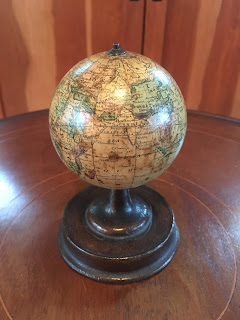 These conservation measures were well worth it for this globe as there just are not that many of these small Schedlers around.   They come up in auctions but are usually flawed to the point where a conservation effort isn't worth it.  This is my first Schedler but certainly I will be on the lookout for more, they produced some of the most ornate bases for globes in the 19th century.   Happy hunting!