The traditional pocket globe is an English creation of the 17th century, a small 2-3 inch globe usually ensconced in a fish skin case, sometimes a small walnut box.  They are wonderful and highly sought.  However I'm not writing about those gems today.   I'm focusing on something  just as unique but with a totally American bent.  The Holbrook hemispheric globe,  or as I like to call it the original American pocket globe.   Here we have a wonderful piece of ingenuity a 3 inch round wooden ball, split in half, then hinged and on the outside a rudimentary globe of the earth, and on the inside a conventional flat map projection of the continents.  A remarkable treasure of American creativity, made around 1855 and sold primarily to schools with the focus on getting these globes in pupils hands to manipulate, and learn. 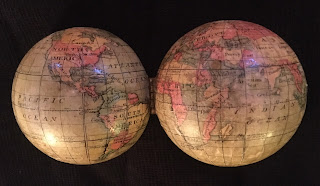 This particular globe was manufactured by the Holbrook school apparatus company of Weathersfield Connecticut.   Holbrook made 3 variations of this 3 inch globe, as well as a larger 5 inch model. They were made with prison labor and sold widely at the time to the public schools just starting to populate our country. 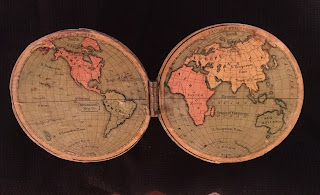 I have been on the lookout for a nice example of a Holbrook Hemispheric globe for a long time. The problem is most every one of these globes comes to market with major condition issues that make them less than desirable in my mind.  For a while I have been considering a globe on offer from Jake Moore at Omniterrum, he had in stock a Holbrook globe that was the variation with a much more detailed and colorful map. In my opinion the most desirable variant of the Holbrook 3 inch hemisphere globes, also the variant seen less often on the market.   So these 2 photos show the interior "flat map" and the exterior global projection.  Notice the exterior map is fairly well detailed for such a small globe especially considering that this globe was produced for children to be a rudimentary teaching tool.  The interior map is much less detailed showing only continents, rather than countries.  I have included a picture of the more frequently encountered variant with the outline color in a picture here.  Students in the 1850's  would be exceptionally lucky to have a globe such as this, many students in Ohio had these as the state purchased thousands! 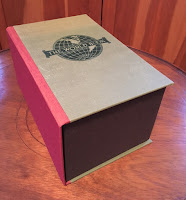 One of the problems that  is encountered with owning a small hinged Holbrook globe is the challenge in properly displaying such an object.   I think I  have an elegant solution.  I had commissioned a wonderful clamshell box that I have then fitted with a special insert to hold and at the same time display the globe.  Here is a picture of the storage box that I think completes the globe. 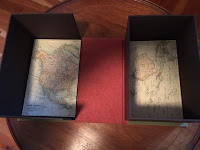 This particular clamshell is unique in that it took the cover from an old World Book encyclopedia to create what amounts to a completely different "world book".  The inside is festooned with a couple of old maps that add another level of whimsey to the purpose of this artful container.   The custom insert holds the globe in the open position. This is in my mind the more elegant presentation.    Of course this box plays double duty as an archival storage for such a delicate piece of history.    I'm going to add a small pillow, or foam backed support to secure the globe in it's display box and I'll update this post once I have a finished presentation. 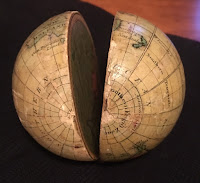 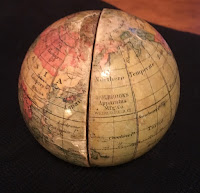 If anyone has read my blog for a while you will know that I'm a condition nut!  I strive to purchase only globes that are in excellent original condition, or short of that finding globes that can be made whole with a minimum of cleaning and conservation.  This Holbrook globe proved to be a challenge.   Firstly these globes do come up for sale most often in what can be described as atrocious condition.  They either need extensive restoration, or they reside at a near beyond repair condition.   Also complicating the matter is the fact that most Holbrook Hemisphere globes for sale seem to be the less detailed variants.  So I've struggled to find the variant I want in the condition I want.   This globe shows wear, primarily on the outside, in the form of scuffing, primarily in the eastern hemisphere, and chips in the plaster skim coat on the edges and in the northern hemisphere, as can be seen in these close ups, notice the northern hemisphere has a chip and some scuffs, the same for the edge where the spheres meet and the southern pole is also affected.  Admittedly the pictures shown accentuate the flaws, in hand they are not nearly as intrusive.  Now normally I would be less than excited owing such a globe, so what gives?   Well I've come to the conclusion that as a package this particular globe is nicer than average, especially because the inside is in exceptionally nice shape.  Also I really have yet to see a Holbrook hinged globe with zero damage at the edges, it's a function of the design, age, and intended use.   All in all given it's 160+ years of age, the fact that it was meant for children, and the fact that it was a rather ephemeral item I think this globe is a pretty decent survivor, and I'm happy to have it in my collection.  I am also very fortunate to own a rare book published by the Holbrook company that would have been used by the teacher in the classroom while demonstrating this globe,   This book makes an incredible accompaniment for the globe, in fact it is far rarer than the globe itself.  It was a lucky eBay find covered in another post, now they are a set! 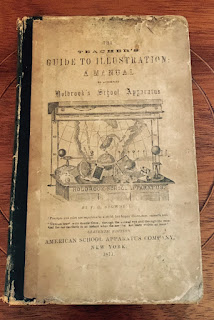 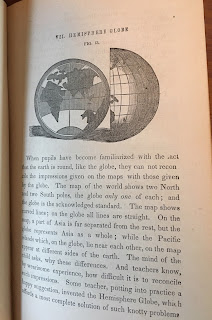 I hope you have enjoyed seeing the latest addition to my globe collection,  this is globe number 30 and has been on my wish list for a long time.  It fills a gap in my collection as until this globe came along I did not own a globe from the Holbrook company, and in my opinion this is the most iconic of the Holbrook globes so all in all a really exciting addition.   As I mentioned this globe was purchased from Jake Moore at omniterrum, and the clamshell box is with thanks to  BookGrrlBindery
As always please leave comments, or feel free to contact me about anything globe related at the following email:  ktl340@aol.com
Posted by Kyle at 3:53 PM