I have a love hate relationship with eBay,  as you will know if your a regular reader.   This is a story about why I love it.  Recently I was able to find a very special globe.  American globe and school supply 6 inch globe, copyright 1892 by Rand McNally.
So  as I search eBay every day I stumbled across an auction for what appeared to be a pretty rare globe,  I say appear to be because the pictures were a bit dark.   I studied the pictures as best I could, read and then re-read the description.   I was set to take a chance I thought this globe could be something special.   I sent an offer under the “ make an offer “ button and then I waited........ late the same evening I hear back from the seller,   I pepper her with questions that the pictures just didn’t answer, satisfied I made my offer.  She accepted and that was it.

The globe was shipped the next day using USPS priority mail,   8 days later it arrives I was nail biting the whole time, as I tracked the globe all over its circutitus route to my door.  Finally it arrived well packaged and undamaged.   I opened the box to discover a very interesting small globe, and I was confronted with something interesting,  an extremely dirty orb.  Now in some ways this is good, if a globe has not been monkeyed around with by others than it is sometimes not difficult to remove a layer of surface grime without harming the underlying surface. 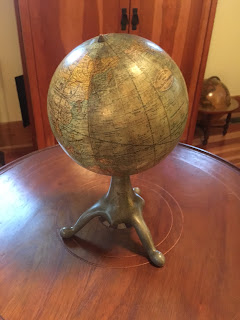 Here I have a picture of the globe 1/2 way  through a process I employed to remove the surface dirt and grime.    The results were astounding.   As you can see this globe had 120 plus years of environmental contaminants baked into the surface.   Now I AM NOT a professional, I want to be clear that I rolled the dice with this little cleaning project so I will not be going into the details here because it very easily could have gone the other way.  Suffice it to say I got lucky.   Now with that said the results were great, it took a ho hum globe and brought it back to a really nice condition, a condition I can be happy having in my permanent collection.
I want to talk about American globe and school supply a little bit because this is a company that as early as 1885 was making globes in its Seneca Falls NY factory.   This particular globe of mid 1890’s vintage has Rand McNally gores,  earlier AGSS globes,, say pre 1890 are found to have English gores, probably from W&AK Johnson.    If the globe has the characteristic “ race track” analemma its Rand McNally,  if it has a figure 8 analemma it's from Johnson.
It's interesting to note that American Globe and School supply was fairly prolific,  especially in the northeast US.  much of their production
is aimed at the student and school market, so it's a wonder many of their globes survive today.   Seneca falls was in the 1880-90 time frame home to another company called " Star Eraser" their claim to fame was a dustless eraser, but they for a few years sold globes that were re brands of American globe and school supply, they seemed to stop before 1890 because they are only found with Johnston gores, here is an example notice the cartouche is very similar to early AGSS cartouche, nearly identical.
I have written before about Star eraser, really a flash in the pan globe maker,  extremely rare globes. 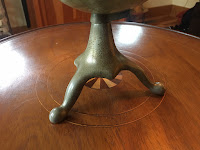 So let's get back to the globe at hand,  for a student globe of the early 1890's it sits in a very nice  state of preservation, the nickel plated base ( a hallmark of AGSS) is slightly pitted, but is better than average.   This globe would have cost about $1.50 in 1892 which was a considerable sum.  Switching from imported gores to domestically sourced gores from the upstart Rand Mcnally was probably a business decision as a way to keep costs low.  This is a great example of how the maker of the gores, maker of the stand and the eventual seller can be 3 different entities in American globe production. 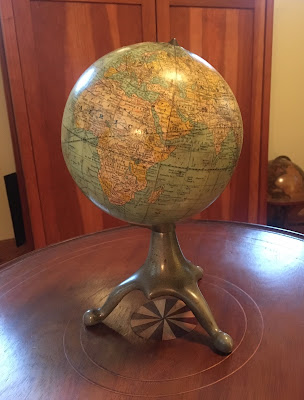 I want to make special mention about the individual who sold me this globe, she shared a wonderful story of it's provenance starting in Nyack NY and traveling through time until the present day,  those stories are why I love this type of history so much,  thank you.
Posted by Kyle at 12:55 PM