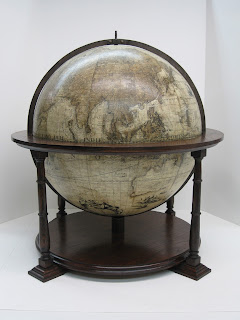 I receive quite a few emails related to restoration and conservation.  Many people it seems are curious about a lot of the same questions. namely, where do I go to have a globe restored? Or what's involved?  More detailed questions also follow me, and I'll tell ya, I really don't know all that much about globe restoration because I've had exactly zero globes restored in my 10 years as a collector.  So why is that?  Well partly it is because I try to seek out globes that are not in need of restoration, also the range of globes I have so far added to my collection are not generally rare enough or hard enough to find in an acceptable unrestored condition. That will change as I seek older globes so nows a great time to learn some more.
When it comes to restoration I think it's important to go into the process with eyes wide open, and to facilitate that understanding I've called in an expert.  Matthew Jones is a professional who's specialty is globes, he has worked at The Green Dragon Bindery in Shrewsbury Massachusetts since 1993.  As a graduate of U Mass ( 1991) he has a childhood love of all things old,  I think many of us can relate.  He has tackled more than 500 antique globes in his 25 years at the Bindery he does everything from wood and metal work to restoring old paper, and varnish.  Below we delve into the questions most commonly encountered on this blog.


1. What makes a globe a good candidate for restoration?

Desire, rarity, personal or family history, and sometimes historical elements.
For years, my ideal globe was an 18 inch W.&A.K. Johnston terrestrial from 1907.
It was pre-WWI and showed the countries, provinces and territories as they were before the Treaty of Versailles changed it all. This is an era of history I read a lot in, so this globe is a natural reference.

2.  Conversely, are there factors that make a globe not a good restoration candidate?

Yes, the better the original condition and more untouched, the better the restoration. Amateur restorations and touch ups make my job harder, less attractive and more expensive. Sometimes, a globe can get really cooked too. Sadly, a great many globes have spent times in damp basements, and burning hot attics. Excessive moisture damage or finishes peeling from heat can be a problem. There is a very fine line between old chippy vanish and a finish that is pulling away paper and destroying the cartographic imprint. Real structural damage is a challenge as well. So, if the globe has a dent or ponk, the smaller the better, and hopefully in a less detailed area like the ocean. Also, pre-1900 globes in the US tend to be better made than later ones. By 1930 the construction quality declined significantly. Later globes just don’t have good materials and are that much more difficult to restore convincingly and reasonably. There is a sweet spot in smaller globes made between 1890-1930, generally 3 inch to 10 inch. These are desirable for many reasons, not the least of which is display options.

3.  Many people familiar with auto restoration talk of " over restoration ". Additionally many categories of antiques especially furniture are  adversely affected by restoration,  how are globes different?  Am I using the wrong word,  should I be saying conservation, instead of restoration?

Globes are in a weird place. Part map, part instrument, part furniture. Whenever possible, I only wax and polish the furniture. Collectors respect original finishes and patina. The metal (brass or iron) is often out of alignment and/or missing small parts. These, help keep the globe in place and spinning safely. I restore and replace brass parts all the time. I keep absolutely as much original material as possible. I have extensive photos, measurements and drawings of original parts. Raw, bent, crusty brass usually gets ultrasonically cleaned and straightened. If it’s just got a bit of tarnish, it can be left alone. Stay away from the buffing wheel and compounds. As for the orb itself with its plaster, paper, paints and varnish? I remove the varnish (or shellac, or lacquer, or sizing finish) only when it is filthy and ruins the maps use and beauty. My plan there is to bring the varnish back to a look, and feel that the globe might have had in its first 25-50 years of life. The founder of this book bindery Skip Carpenter and my father Bill Jones both restore antique automobiles. I get it.

Conservation usually means consolidation, as invisibly as possible without any additions or changes. Generally small amounts of archival materials are used here.

Restoration is conservation, with small changes to try and bring an object back to its original state. Generally, slightly larger amounts of archival materials are used.

All things being equal, everyone wants a near perfect old globe. Then they want a solid, maybe dark, but untouched or barely touched globe. Then a cleaned but respectfully conserved and restored globe. Then a damaged but unrestored globe of note. Then a basket case, with previous amateur work.  Values reflect all these states. Collectors and institutions all seem to want legible globes.

Here Matthew has provided photographs of  a rare James Wilson 9 inch globe that in addition to being quite darkened over time, suffered a pronounced ding to it's surface that affected not only the map but the plaster underneath. These photos show what is possible in the hands of an expert restorer.

Notice in the after photo not only is the dent completely gone but the surface of the orb and horizon paper are clean, evenly toned, and remarkably more legible. Also the map colors as the globe maker intended come through. A far more desirable globe from a collecting standpoint.

4.  What are the most common problems encountered with antique globes ,and
how are they delt with?

5.   Some globes seem to be better survivors than others, in my mind Loring/Joslin falls into this category.  Were some globe better made? Or were there just so many more of some manufactured , and therefore  more survived?

Joslin/ Loring is a prime example of a well made and plentiful globe manufactured in Boston for almost 50 years. Good hardwoods, beautiful turnings, quality brass, and crisply printed cartography, updated with the changes of the time. Also, most if not all are clearly dated.
Slightly later globes that are decent, are the imported Scottish Johnston’s which were leased out to many US based selling firms. The 18 inch Andrew’s pictured is a transitional globe, made by Johnston, sold by Andrew’s, who had just been purchased by Weber Costello. The one weak spot in these is often the horizon paper. Lesser quality paper, mounting and finishes leave these dark and chippy. I have a small number of accurate facsimiles for repair of these horizons, or replacement.

**IN these pictures notice the careful attention to the cartouche and close color matching.**

6.  How would a new restoration client go about having work done at Green Dragon Bindery?  Do you send detailed photos, and a description  of what work you'd like to have done?  Or do you send the globe in for estimating?

Email is a good start, with photographs of the globe in question in natural light. A few photographs focusing on the damaged areas and one of the cartouche showing the makers name.

info@greendragonbindery.com  508-842-8250
and we are on Facebook as Green Dragon Bindery

7.  What sets Green Dragon Bindery apart from others?

Love of the material, experience, reasonable rates and turn around times and artistic integrity.  We are also prepared to tackle a lot of different challenges. As long as its paper, pasteboard, leather or a small wooden object, we are ready and willing to restore it. If we can’t, we’ll say so.

**All photos in this post are used with permission of, and are property of The Green Dragon Bindery**
Posted by Kyle at 10:45 AM