It's been too long since I wrote anything on the blog,  apologies  sometimes you become busy and time slips by.
If your a steady reader of the blog you will know I have a love/ hate relationship with eBay.   It's the source of some of my best finds and also sometimes my greatest frustrations.  eBay seems to go in waves, sometimes there's just great stuff coming up all the time and sometimes there's just nothing for months and months.  Of course this is highly subjective if I'm not finding things certainly does not mean that others with other interests are not finding deals of a lifetime! 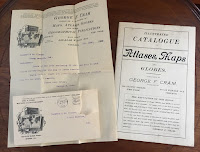 The past 2 weeks have been interesting I've been able to score some great globe related research materials for next to nothing things that add to my education.  First up I have an interesting letter and Catalog from the George F. Cram company.   Cram's does not get a lot of love from me mainly because their globes come on the scene in the 1930's towards the end of my collecting interest, but this is different.
Here we have a Cram catalog from 1906, and we also have a wonderful ad for the ACTUAL first Cram globe. 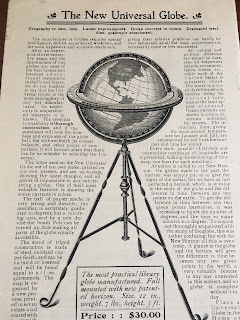 This catalog found no love on eBay, I was an early and lone bidder winning this gem for under nine dollars.  It was well worth it for the history It provides me.   The catalog is actually full of color pages of maps for sale, color being a rarity in catalogs this old.  The real excitement for me is the advertising for the 12 inch globe prominently featured on the back cover.  The George F. Cram company issued one globe well before the 1930's globes that we are all familiar with.  This ad suggests a map updated for 1905!  These are amongst the rarest of Cram globes. I've known one collector with a mint example, and I've seen perhaps one other in my collecting time.  This ad easily pictures not only the earliest Cram globe but also the most desirable Cram globe made.   After this globe ceased production Cram was out of the globe business for a while resurfacing in 1932 with their vast array of globes that continued for decades. 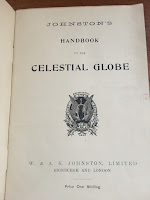 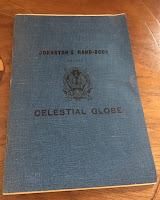 The next eBay find I have is a bit of a mystery to me.  I have a Johnston's celestial globe handbook, with no discernible date of printing.   The clue of the cost of the book at one shilling surely makes it a rather early item.   I purchased this with the distant thought that this just might be the manual that would have accompanied a celestial globe I already own.  The globe in question is an AH Andrews celestial , but the Andrews company sourced their gores for the celestial from W&AK Johnston.  Could this little tome be the handbook that would have been provided ?  It certainly has to be a possibility.  I've never seen an Andrews Celestial handbook, and the cover in this case matches the globes color?   Anyhow I was the lone bidder at 99 cents!  It  was interesting because as I  type this there I another copy of this handbook on eBay for $120.  It goes to show that the ephemera associated with globes is valuable only to those who have the globes themselves . 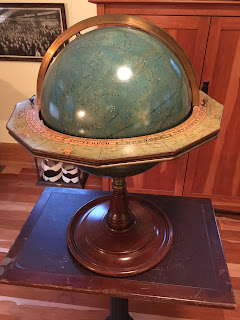 Here is a photo of the globe I think attaches to this handbook, its a late 19th century Andrews 12 inch celestial.  A true rarity, I've seen 2 others in 15 years.
I hope you've enjoyed this post, and I hope to have another post along much quicker than this. As always please feel free to comment, or reach out to me to discuss globes, collecting or anything else associated with this great hobby.
Posted by Kyle at 9:26 AM