This is a guest post by my friend and fellow collector Brian,  I hope you enjoy:

“In a single half hour a child may be taught by this globe what few persons learn during their lives” – Preface to “A Manual for Joslin’s New Solar Telluric Globe, Designed for the Use of Families, Schools and Academies” 1858 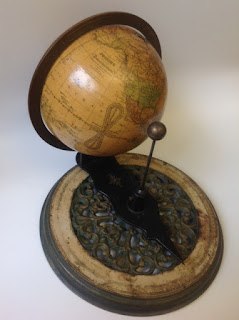 Can you close your eyes and picture the earth from space? Can you see how it lines up in relation to the sun and the moon? Can you go further and construct a mental image of what the rest of the solar system looks like and how it is oriented in the Milky Way? If you do it is likely that you have spent some time looking at computer models or real images from space. Your conceptualization of the physical universe is likely related to how well you paid attention in 7th grade and your exposure to books and digital resources that are now at our fingertips with the click of a button. It doesn’t just come naturally from standing outside and looking up!

Now, as best you can in your mind go back 150 years to 1870. What tools did people have to understand the motion of the earth in relation to the sun? Astronomers have been making observations for a long time and there have been some pretty big arguments through the centuries about exactly what revolves around what but mainstream science has settled on the heliocentric model with the earth going around the sun. As a basic concept this seems rather easy to comprehend but it is a little more complex to understand how seasons work and why different parts of the earth have longer periods of light than others.

Mechanical models of the universe have existed as early as 150 BC  but certainly were not common items. For educational purposes, companies through the years have tried to create simple models of physical phenomena that could be used as teaching aids in the classroom.
Generally speaking, tellurians show the relative motion of the earth and the moon as they revolve around the sun. The device featured here is called a solar-telluric globe because it’s main purpose is only to demonstrate the relationship between the sun and the earth. 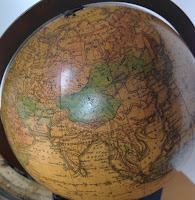 I was excited to find this Joslin device because I have wanted an old orrery or tellurian of any type since I was in high school (the late 1980s). I was particularly happy because, even though the paper on the base is fairly worn, the orb is in exceptional condition. As you can see in the photos, there is really only one small ding just of the coast of South America. The missing piece of the mount was the rod with the brass sun but this is the easiest thing to replicate. I ordered a small solid brass ball from the Internet and cut an appropriate sized length of metal rod to mount it on. I then drilled a hole, machined some threads with a tap and die set and screwed the ball on top of the rod. As a finishing touch, the brass was treated to replicate the appropriate patina for 150 years. 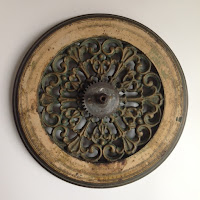 The provenance of this globe provided to me by the previous owner explains why the orb looks so fantastic. During the Great Depression the seller’s grandfather worked as a school janitor which would explain how it was saved from being discarded. Grandfather passed it along in the 1960’s at which point the globe was simply put in a box in a closet where it sat for almost 60 years!  As an aside, I have to comment how sad it is that schools through the years have often thrown things away rather than pass them along. I have a friend who has a pristine and massive full-mount Denoyer-Geppert platform globe from 1967 (like the one on Murray Hudson’s site) that she found discarded next to the dumpster out in the back of the school she worked at!

The earliest Joslin Solar Telluric mounts I have seen are from 1854. Information on David Rumsey’s website indicates that in 1853 this device won a bronze medal at the Massachusetts Charitable Mechanic Association fair. The orb on this one would date to circa 1870 since Alaska has changed from Russian America (1867), Oregon Territory no longer appears (1860 Joslin globe had this) and the name New Holland has been removed from Australia. It would seem that for some reason 1860 is the last year that Joslin decided to put a date on its 6 inch globes.

The full title of the manual that would have accompanied this device is mentioned at the top of this post and it is very clear that the globe was meant to be used for teaching purposes. The full text of the manual can be found at: https://archive.org/details/manualforjoslins00josl/page/n7

Below, I have included the titles of the various chapters that can be found in the manual so you can get a quick idea of the contents. As a globe collector I just have to say that it is so incredible to be able to set the globe position and then push it through one orbit with your hand!

Part I
Description of the globe with definitions of parts

Part II
Solutions of problems
Position of earth as regards the sun for every given day of the year
Find the latitude and longitude
Show the changes of the season in relation to plane of orbit and inclination of earth
Find length of day or night for any given day of the year at any given place on earth
Show that relative length of day and night changes more rapidly in high than in low latitudes
Determine what time sun will rise of set on any given day of year at any location
Find when the sun will be vertical at any given place in the torrid zone or how many degrees north or south of the equator it will be for any given day of the year (analemma?)
Show what parts of the earth have constant day or night and how long this condition lasts
Determine when morning and evening twilight will begin at any location


Time of day at any given location to determine the time at any other place
To show why 366 revolutions of the earth upon it’s axis are required, to make 365 days
To show the sun’s place in the zodiac


Show the principal of measuring distances to the sun and stars 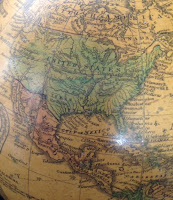