The delight of building a collection of small globes

OK.....OK...I'll admit it I'm obsessed with small globes ( those 8 inches or less in diameter)  partly born from necessity;  that being I'm running out of display space.  Also  I'm just in love with the uncommon, and small globes are much less common than their 12 inch counterparts.   Five of the last six globes I've added to my collection are 8 inches or smaller in diameter.   For this collector good things do come in small packages.
Small globes in many cases were issued to or purchased for use by children. That's probably the main reason they are just not as abundant as 12 inch models.   The  appeal of small globes  comes into play when it comes to display space.  I have an exceptionally forgiving family, and this allows me to utilize about 400 square feet of our home to devote to a collection that currently numbers 22 globes and related ephemera. My wife does not want globes taking over the whole house and with two little ones I have to be fair to them as far as living in and enjoying just being kids, so small globes it is ( with some exceptions)

I have to say though that there is just something great about a display of miniature worlds. This photo above spans 60 years of American globe production during the second half of the 19th century, and it could all fit comfortably on a single bookshelf! So what am I looking for when it comes to a small globe?  Well first and foremost condition, I preach condition constantly on this blog and It bears mentioning now, once again that it's better to buy a globe in great original condition rather than live with a damaged antique or spend hundreds or more repairing a globe. All things being equal a globe that is in great original condition will always be worth more than a globe that has been repaired to a similar condition.  The second thing I look for is who made it. Early makers or obscure makers will always be more desirable.  Schedler, Holbrook, Andrews, Rand McNally, they all made great globes that were as small as 3 inches in diameter.  Of course finding them..........that's another story.                      Something I've noticed regarding pricing for small worlds. All things being equal expect to pay a premium for a smaller globe, these globes are much harder to find and thus I generally expect a 20-50% premium price wise when they do turn up. 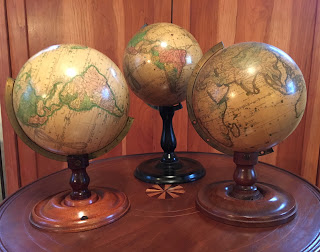