Joslin 1846 globe in depth part 2 of 2 : A deeper look at the Gilman Joslin company

I want to continue my post about the fantastic Joslin 1846 globe with a bit more in depth look at both this globe and the Gilman Joslin company itself.  The Joslin brand as far as 19th century American globes is concerned is arguably the most often encountered examples of globes from this period.  With a production that spanned nearly 70 years from 1839 until at least 1905.
Given this longevity you would think that there would be a lot written about this company , but my research has turned up precious little.  Here I will try to lay out a picture of this company so the next time we encounter a Joslin globe we can have the background.
We know that Gilman Joslin worked for or with Josiah Lorring taking over globe production in 1839 but retaining the Lorring name for a line of globes past this date. We also understand from various historical sources that Joslin himself was initially involved in the manufacture of looking glasses, and was a skilled wood turner by trade.  According to Werner, Joslin employed about 5 people initially in the early 1840's in the manufacture of globes, 3 men and two women to be precise.
Gilman Joslin was not the first but was soon to be the largest American producer of globes. According to Rumsey the 1839 globe was a reissue of Lorring's last globe but now with Joslin's name.  In 1846 after Texas is annexed into the United states Joslin issues a completely new globe showing this new development.  They used the Boston firm of Annin & Smith for their engraving. Joslin would throughout their existence update gores periodically, and re engrave globe gores as major cartographic changes came on the scene. Later Joslin globes were engraved by another Boston firm G. W. Boynton.  Seen at right is a page from a school supply catalog dated 1855 their 6 inch globes are $5.00  a fairly substantial sum for that time.
Something that always intrigued me was the fact that the Joslin company was very traditional in it's design of globes. They to my knowledge never issued a blue ocean globe even when their contemporaries in the UK and America did. They also stuck to the most traditional globe mountings of the period.  In addition to their conservative design they kept producing globes for many decades using the same mounts, year in and year out. Below are two six inch globes separated by roughly 40 years but even at first glance you can tell that they are both of the same maker.

In this photo, the globe on the left retains the same style of mounting with only the slightest nod to keeping current with design trends. The brass meridians are essentially identical, and even the set screws match.   At the same time other American globe makers were attacking the cost of production aggressively with simplified mounts and different engraving methods that proved easier to update as well as being less expensive to make.  You see in America at that time selling to schools was where you made your money. The school market paid the bills. I can't help but speculate that as globe production moved west to Chicago along with population trends out west if this alone did not spell the demise of the Joslin firm.....?
None the less they are fantastic globes to put in your collection, and as far as 19th century American globes go Joslin models are the most readily accessible from a pure availability standpoint as well as a cost standpoint.  I've always been puzzled by this; Joslin globes seem to come up for sale in far greater numbers than Holbrook/ Andrews globes even though they were active a similar number of years.  I have yet to find an answer for why that is. If any reader out there knows please chime in the comments or drop me an email.
I want to finish this installment by bringing you back to the globe that got me thinking about all of this in the first place the Joslin 1846. I want to share with you a surprise this globe holds. 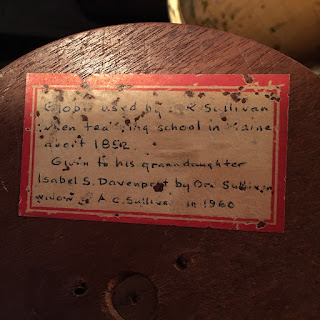 On the underside of the base  there is an inscription that says this globe was used by a Mr Sullivan while teaching school in Maine in 1852, it then explains how it was handed down through 1960. What a wonderful window into this globes history. I did look up via Google and the like, each of the people mentioned.  Suffice it to say the story makes sense from what I could ascertain. The family moved west in the late 19th century and this globe came from a southern California dealer very close to where some of the people mentioned in this inscription are laid to rest.   So bottom line somewhere in Maine in the early 1850's this globe was ordered via mail for $5.00 and when received was set to work teaching children geography.  Now that's why I collect globes!
Posted by Kyle at 5:51 PM