So let's say you've stumbled upon my blog because you want to start collecting globes, or perhapse you've purchased an old globe and now you're interested to know what else is out there and what you should look for starting out.  I want to use this post to try and show a few examples of great beginner globes.  Globes that would appeal to someone starting out, as well as globes that stand on their own as collection worthy items to build off as you embark on starting a collection.
Now admittedly this list will be biased and certainly the most important rule still applies, that is buy what you like !!  With that said I want to attempt to lead you down the road with a few examples of globes that I think will stand the test of time as well as impress your friends when they ask about your new collection. ( my friends stopped asking years ago, they don't have 3 hours for a globe lecture) .  Anyhow here are a few favorites you should keep your eye out for.

1. Replogle Starlight globe,  Replogle has been making a version of the Starlight for over 1/2 a century it's a Replogle classic.  They started manufacture in the 1940's and I believe it continues today.  So what makes it special, well firstly it's a black oceans globe. Secondly it's readily available on eBay, and Etsy for generally $100 to $200 so it's a great way to add a black ocean globe to your collection for a sum of money that won't break the bank. That said it is an honest collectible globe.  It has desirability that will only increase over time.
What to look for when shopping, well  condition is key, buy the best condition you  can find. Be particularly aware of chrome  pitting, and equator tape missing.  Secondly  the older the better, try finding a nice  example from the late 40's or early 50's .  It's  a great alternative to the more expensive Weber Costello black ocean  globes out there, but it has the same great look!  Now one last thought,  these were made as an electric illuminated globe also. They will cost more,  but finding one of those in nice shape is a really nice " move up " purchase  for an intermediate collector.

2. Rand McNally Art globe:  The Art globe is one of those globes that everyone who has spent any time around vintage globes at all is probably at least a bit familiar with .  Much like the Starlight it was produced for many years and in many styles different sizes and different bases are the hallmark of this great globe.   How do you know your looking at an Art globe? well the cartouche will be in the shape of a clam shell, and there will be several artistic embellishments throughout the globe in the oceans of ships and sea serpents that add artistic interest to this above the geography displayed.
Rand McNally produced the Art  globe forever starting in the late 30's  and running through the 1970's at least. That means there are Art  globes out there to fit any taste or budget. Collectors should look for  pre war examples in excellent shape. Good examples from the 30's  or 40's can be had for $100 to $300 depending on rarity and  configuration. Rand McNally even made a floor model of this  popular globe, Art Deco bases of glass or Bakelite are most  valuable, but there is something for everyone here.


Worth noting is the fact that these globes are readily available so as   a collector you should hold out for the best one you can afford, and   I'll tell you on eBay you can score quite a bargain on a nice Art    globe if you pay attention. Especially    on an under priced Buy it Now listing.  Look  for strong bright original colors. The one on  the glass base pictured at left shows the best  original color of my 3 examples. It was  supposed to be colorful to draw the eye and  make it as much about art as geography. 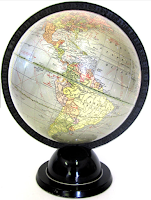 3. Crams silver ocean globes:  I'll admit I do not show the George F Cram company a lot of love on this blog. I ignore them quite frankly. Well that has to change because they did indeed make some very interesting globes that should be considered. At the top of the list are their short lived but impressive silver ocean globes.   Crams got their start in the early 1930's and as a company entering a crowded field, they had to be different. They were not shy about diversifying their offerings away from the traditional. One of those ideas were their line of silver oceans globes. A short lived offering lasting 1/2 a decade or so these are some of the most collectible Cram globes on the market.  Given their rarity you would think they would be expensive, and mint condition pristine examples are several hundred dollars for sure. However a perfectly nice example with minimal scuffs  and a nice bright finish can still be had in the $150 to $250 range.  Not a beginner globe but certainly a strong intermediate globe; the centerpiece of a respectable collection. 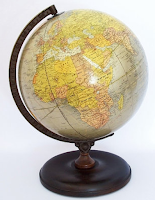 They look so different than any other globes out there. They will appeal wildly to some, and turn off just as many.  So if you decide that you want one here's what to look for. The silver oceans themselves were prone to scratching. This is one reason they were taken off the market, the fact that they were not as robust as other color combinations. Also the equator tape can become damaged or parts will be missing. I would say all else being equal I'd rather have a silver finish in great shape with a bit of missing tape rather than the other way around. Finally these came in a wide variety of bases the metal bases were prone to scratches as they were simply painted. However I'd argue that the metal works better for the whole look than the wooden base, in my opinion.  The vast majority of these were 12 inch models. If you want a rarer version find a 10 inch model.  eBay gets it's fair share of these so it will be reasonably easy to find a nice one if you are patient. Dealers try to also have these on hand as they are popular, and getting more so.

4.  Weber Costello 8 inch globes:  OK so you've got a great black oceans globe and perhaps you've found one or two other globes that speak to you. What next?  Well you need the quintessential vintage globe you need something that will sit on your bookshelf and scream " serious antique!!"  Well you need one of these:  A Weber Costello 8 inch school globe. These were sold en mass to schools, and families alike, small enough to be easily moved around the classroom they were a staple of classrooms and homes from 1910 to 1940 they are what many people think of when they imagine what an old globe should look like. It's the tripod claw foot base that puts these in another time and place.   Weber Costello imported G W Bacon gores, and then retailed this globe as well as over labeling it and sending it through every school supply house they could think of.  It came offset mounted, full meridian mounted, and exceptionally rare it even came full mounted.  Below left I am showing a Weber Costello with Denoyer Gepphart over label from the late 1920's at bottom right is a Weber Costello Peerless from about 1910, this is an exceptionally early mount, all are 8 inch in diameter.   So what to look for, as with any globe condition rules, these will be the most costly of the 4 globes featured, and will vary the most based on condition. expect to pay between $275 and $400 for a nice example. Exceptional examples might be double that.  These come up on eBay monthly so patients will pay off and a nice one will find it's way to you in time. These are some of my favorites!

I want to summarize this information by saying that these are just 4 examples of great globes that a beginner or intermediate collector should be on the lookout for, there are two dozen other globes that fit that category also. I had to pick four of my favorites to showcase. Buy what you like and you'll never really go wrong.  It's all about the hunt for those serious collectors ............


****Picture credits,  all but one picture in this post comes from Dee at Upstarts, and Carolyn at Vintage Cals, both wonderful Etsy shops, both have links active in the links section of the blog, a big thank you to you both!!  The 1910 Weber pic is with permission of Purple mouse vintage also an etsy shop****