This post is going to be a bit different,  usually when I add a new globe to my collection I give it a post and explain a bit about the item and why I found it special. Today I'm going to do that and a whole lot more.  You see today I want to talk about an exceptional find that came my way in a wholly unexpected way.  Today I want to offer you, dear reader a peek behind the curtain from start to finish of a rare globe purchase.
I go fishing on eBay every day.  Some of you will read this and know exactly what I'm talking about, others will just be confused. I have favorite searches that get checked every day, multiple times a day in some cases ( guilty....) and the vast number of times you searches turn up empty. Every once in a while though..............this is a story of one of those times.........
Tuesday 11/1/16 was a busy day for myself, kids, appointments, a doctor visit, one of those days when you just don't have time to breathe, you know...   Well as the day was winding down I was between appointments and I figured " ya know I better check eBay, I haven't yet today"  and I was scrolling through the usual dross that is the globe section when a very interesting listing caught me.  The listing said " Joslin six inch globe on stand 1846 excellent condition"  WOW  that headline grabbed me for sure,  it was a buy it now or best offer auction, here is a screen shot of the auction: 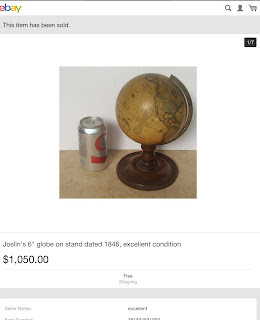 As you can see perched next to a Diet Coke can for size reference is a very old American globe, the pictures and the description said a lot, they suggested that this globe was in excellent original condition, and judging from the pictures I felt as if I needed to act fast,  but I needed more information, I'm sorry but I just can't throw a grand around without researching things a little bit more. So I sent a few questions to the seller.  Well I sent quite a lot of questions to the seller, a bit of a risk because in the interim another buyer could have easily executed the BIN option and all of my study and inquiry would have been rendered moot!  A chance I had to take because I wont make a substantial purchase without my appetite for full information satisfied.   I don't recommend anybody go into a purchase especially one over the Internet until all questions are answered , that's really Internet buying rule 1!!
OK so I sent off my litany of questions and I waited impatiently for a response, minutes later much to my delight the seller answered and removed any doubts that I had, this globe was the real deal so to speak.  Now the nitty gritty....... negotiating the price.
This eBay listing was set up as a very straight foreword buy it now or make offer,  now when a seller says make offer in the listing, then that in my mind is a 100% green light to negotiate for a lower price. Again with this item, and being that this listing was only hours old, I took a bit of a gamble making an offer.   At any time a full price buyer could have swooped in and bought this globe right out from under me.   Now for those of you who know me I'm all about the deal.  I can't help trying for a great deal.   So with this in mind I did some quick research on this globe, and determined what a solid fair offer would be.  I did this by primarily looking at auction results over the past few years that featured similar Joslin globes. I came to understand that this seller was not being too off the mark at $1050 but that didn't stop me. I offered $800 and much to my delight it was accepted straight away...........should I have gone lower?.........lingering doubt.  The answer is no, and here is why. A price of $800 according to my research is right where the market is for such a globe, yes retail prices are much higher quadruple in fact. Auction price is another animal all together.  I based my fair price on this recent sale: Northeast auctions, Joslin globe sale   this link will take you to a recent auction where this globe crossed the $1000 hammer price, netting $850 for the consignee minus any fees so I surmised that this globe could and should sell near this price minus commission and fees.  Lower and I would have been in danger of " low balling" the seller, and believe me it's better to arrive at a fair price for both sides rather than be a jerk!  One more thing about listing items on eBay that are many hundreds into a thousand dollars or more, please include shipping !!  This seller did it is the right move, were not talking $20 items these are expensive,  just include shipping, that's the classy move.
So then lets examine this small treasure a 170 year old American globe: 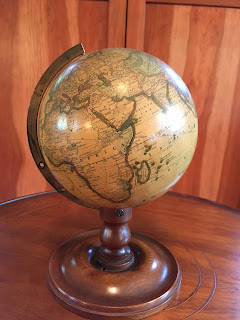 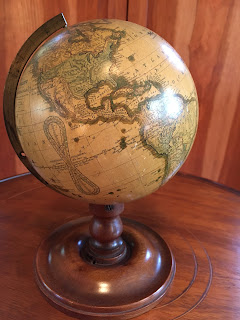 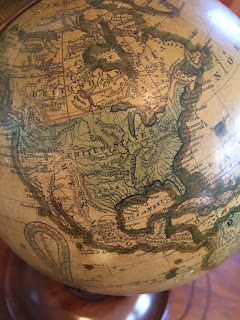 According to Werner(1) Gilman Joslin worked for Josiah Loring and in 1839 took over his globe making operation it is that year ( 1839) that Joslin issued his first globe.  That globe would be revised periodically until 1846 when Joslin issues his second newly engraved globe.  It is that which we are faced with here a splendid Joslin 1846 globe 170 years of history in your hand.  Quite literally in your hand because this is a 6 inch globe and stands a mere 9.5 inches tall.  I will throw out an assumption here, the Texas republic ceased to exist on on December 29, 1845 (2) when Texas was annexed into the United States. This event I'm sure prompted the issue of a new globe for the following year. Notice the US boarder includes newly admitted Texas, but still does not include the southwest states we know today those states continued in 1846 to be part of Mexico.  Alaska on this globe is a long way from being part of the USA here it is Russian America. 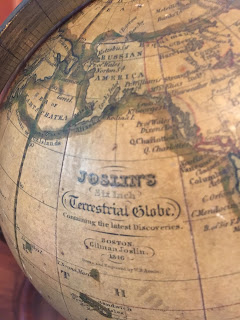 Africa is detailed around it's edges and the vast center of the continent is labeled simply "unexplored".  The fact that this globe has a date stamped right in the cartouche is noteworthy because later on this became a rare thing because dating a globe makes it in a way instantly obsolete.  this practise was nearly unheard of towards the turn of the twentieth century.
A young globe maker in a very young nation made this globe in Boston, and it was retailed for $5.00 a substantial sum at that time.  The United States in 1846 was a completely different place apart from city centers near major waterways the vast majority of the country was very sparsely populated.
As an artifact this example of Joslin's handiwork remains in excellent original condition, with many fewer issues than most globes to have survived this long. Another beautiful combination of wood, metal, and paper, scientific, historic and artistic,  at least in my opinion.
This globe was I'm sure primarily used as a student or classroom globe due to it's size. It is quite detailed and was hand colored by one of 5 Joslin employees.  This globe in my mind tells a story of a young nation and it's belief in manifest destiny.