Anyone who has ever been even a moderately engaged globe hunter has run across a "Peerless" globe.  Weber Costello used the term extensively through the late 1950's at least; but it has also shown up on globes from other sources as well. More uncommonly was the use of the term/ brand Peerless on globes from before WWI.   Is Peerless exclusive to the Andrews/ CF Weber/ Weber Costello manufactured globes?  Is it a G. W. Bacon brand of gore?  What is the link  if any?  Is it simply a marketing ploy, a way to distinguish?
Below I want to explore a few examples of the Peerless name as it has appeared on globes over the years. 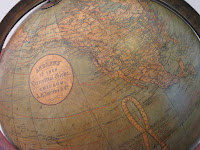 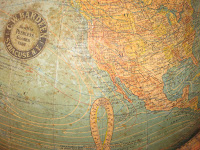 On the left an Andrews globe with Bacon gores, On the right a Bacon gored C. W. Bardy globe labeled "Peerless"  The cartography is the same, having originated from the same mapmaker, but sold to two different globe retailers.  Andrews most probably made both globes, but why does one get a Peerless label and the other does not?  Both of these globes date from the last quarter of the 19th century, some of the oldest globes to show the Peerless designation.
Next up I want to explore some slightly newer globes both labeled Peerless. 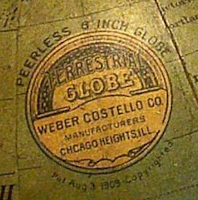 This first cartouche to the left is an Atlas school supply over label of a Weber Costello globe, notice it has earned the Peerless designation. On the right is a straight away Weber Costello globe this time a six inch basic children's model that has also earned the label Peerless.  I've chosen both of these examples because both of these globes were produced in 1909  and both were made for the school market.  Is Peerless a designation that was made to designate a school globe from a globe produced for the home?   Is that the case with the Andrews globes above as well? Was one made for home and received Andrews standard label the other for school and thus received the Peerless designation? 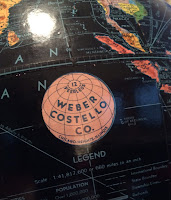 Finally I want to show one more Peerless globe a classic black oceans Weber Costello with the designation Peerless.  This is by far the most common encounter of the name Peerless that one is going to have these are abundantly available. Also these globes being basic models were primarily marketed to students.
One more observation, did Peerless start as a way to delineate between the school/ student market and the home market?  Did that distinction blur into the 1930's and later as many Airplane base globes destined for the home market also carry the peerless designation.

OK some questions to think about:

2. Was "Peerless" a part of Weber's school marketing?

3. Did this designation change or blur over time?

3. Did Peerless originate away from  Andrews/ Weber ?  Or was it an Andrews invention?


I've set this post up a bit differently. If someone knows the answer to any of these questions I'd love to hear from you.  I'm eager to get to the bottom of this. Additionally, perhaps I have not asked the right questions then please by all means chime in lets discuss!!