Today I'm going to make a right turn and not talk about old globes, in fact just the opposite I want to share a conversation with the creator of a Mars globe based on the mapping of mars by Percival Lowell.
Michael Plichta is the man behind this globe: 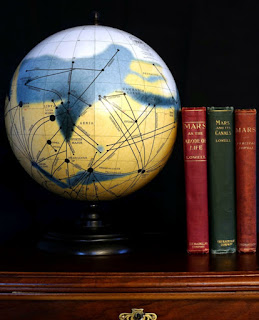 Michael has created this globe, a handcrafted 12 inch rendering of Lowell's work in spherical form, beautiful, artistic and certainly interesting.  I must confess I'm not necessarily into planetary models ( other than our planet that is ) but when I studied the manufacture of this item I was so impressed that I wanted to learn more.  Manufacture is not even the right word here, hand crafted is the case.  It's wonderful to see a hand made precision item created today. Reminds me that we still have the abilities if so inclined to create with our hands.
I reached out to Michael and asked some questions regarding his company, and process, read below a fascinating conversation.


1.  What brought you to wanting to start manufacturing globes, then what made you choose the Mars globe as your first issue?

I was always excited by astronomy and when I was 15 my mother made me the gift of a little telescope. This was the beginning of exciting nights observing the moon, Saturn, Jupiter and, of course, also mars. I was immediately thrilled by the view of mars in the eyepiece of my telescope - especially I was impressed by observing its polar caps and the dark blue-green areas in contrast to the reddish ochre parts. Because I wanted to learn more about mars I started to read everything about this planet. After a while I stumbled upon Percival Lowell and his Mars-canal observations. It was his book "Mars and its Canals" that inspired me for more observations and I wanted to find out whether I could also see the canals. Two years ago, I was lucky to get my own first traditionally crafted moon globe (Raeth's moon globe from 1976) and this was the time point when things got together: my passion for "Mars and its canals" and the idea of building my own globe. Of course, naiive as I was, I thought that it is very easy to build a handcrafted globe. In the end it took me more than two years to get all the knowledge, tools and materials that are needed to build a globe.

2.  Your production techniques are very traditional,  a fact I find appealing,  why did you choose such a traditional method?

3.  How did you learn the methods that you employ to make these globes?

Two years ago when I decided to build a handcrafted globe by myself I had no idea how to build one and what tools are needed. Because I was lucky to get a handcrafted moon globe I carefully inspected how it was build and of course thought, I can easily acquire the skills. But of course it was not easy. So I bought  some antiquarian books that helped me to get an idea about the exact production process and I started to make some tests. Basically it was trial and error.

Well, I do not want to have a mass-production item. My idea was to build something that represents somehow a counter-part of our fast moving time where you often are confronted with short-lived items that are basically always available. So my limited edition of a handcrafted mars globe can be understood as a counterpart of our Zeitgeist and stands for quality, durability and also for a continuing the fantastic skill of globe making that we had almost forgotten these days.

5.  Are you the only artisan involved? Do you make these globes from start to finish?

Yes. At this time PKM is a "one man show" and I do everything on my own: building the sphere, remastering the map,  converting the map into paper gores, hand-applying the paper gores, varnishing and mounting of the globe. At the moment the only thing that is made outside my workshop is the wood-turn works. But I have ambition to also learn this step and build the wooden parts of the globe by myself in the near future.

6.  Tell me about the map itself ?  Perhaps even elaborate about the process is it lithography,  or computer generated?

The mars-canal map by Percival Lowell is printed in his famous book "Mars and its Canals" which was published 1906. This is a quite small-scaled map in Mercator projection. To bring this map onto a 12" globe, I had to scan this map, convert it into geometrical form that fit on a sphere and digitally remaster it.

7.  Lowell you said was your basis, did you interpret Lowell's map or are the gores copied from Lowell's own drawings?

The globe shows the original mars-canal map by Lowell from 1905. This map was converted into 12 appropriate paper gores which was a painstaking and lengthy process. I tried to make as little changes as possible to give a most accurate reproduction of the mars-canal map.

8.  Touch on something I did not ask?

Lets talk about my future project. My next globe will show planet Venus based on a historical map by astronomer Francesco Bianchini (1662-1729). A fascinating scientist who published a very unique Venus map. Comparable to Lowell, we nowadays know that he was wrong with his beautiful map but his enthusiasm inspires me. It is a piece of scientific history that I love to revive.

9. Are you a collector? Or Astronomy enthusiast?  Phd in astrophysics?  Where did your spark come from?

I am a combined "science and antiquarian books" enthusiast. I got a PhD in psychology which cannot be more far away from astrophysics. My professional interest in the sometimes lunatic psyche of men brought me to get interested in Lowell who was obsessed and unwavering in his thoughts about mars. 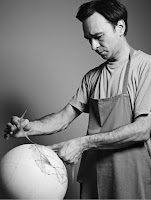 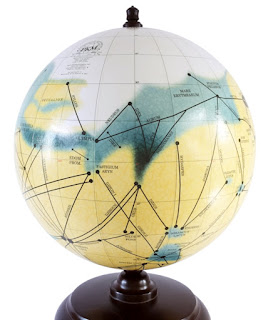 OK, some of you are going to ask, Kyle are you advertising for this guy....?    No, I'm not.... well yes I guess technically I  am but not in the usual sense, I have no financial or personal interest in this project, I just happen to think that this exceptional product deserves some publicity.  I love the idea of hand craftsmanship, were too caught up in the quicker, cheaper, now now now of today. Just like the globe makers of yesteryear this guy slows things down and puts quality over quantity.

**Photos in this post are credited to  Christoph Hoehman,  thank you