I want to share an exciting find I made recently.  Not too long ago I started exploring the world of tin globes and globe toys.  The research I did for that article inspired me to start the hunt for an exceptional tin globe to add to my collection. I settled on trying to find a great example of a J Chein globe. To me this globe blends perfectly the narrative of a functional toy, or an inexpensive way to give a child a globe.  As luck would have it I stumbled upon and was able to purchase this fine example: 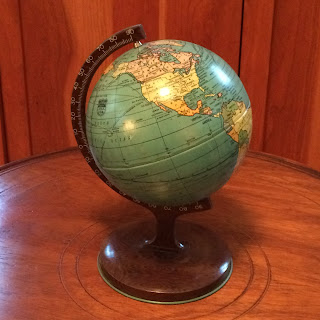 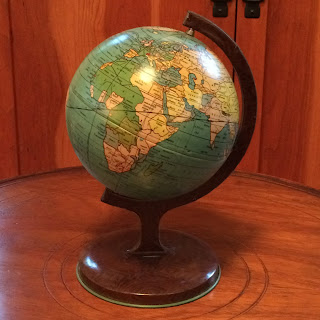 This is a near mint 1928 or 1929 J Chein tin globe. Charles Lindbergh's May 1927 flight is prominently laid out, and Central Australia is in existence on the map.  Iran is also still Persia.  The orb itself is about 5 inches diameter, and it sports an accurate graduated half meridian. It is also displayed here in the brown finish base instead of the more common yellow finish.  A remarkable little globe that probably would have retailed 85 years ago for no more than a couple of dollars. Certainly a great way to introduce geography to a child.  Is it a toy or a globe.......?  Well in my mind it's a bit of both. A cross collectible for sure.  A direct competitor at the lower end of Weber Costello, Rand McNally, and Replogle globes.  In fact this and other inexpensive tin globes put the traditional globe makers on a little bit of a defensive path with each rushing to market with even more affordable globes of their own.  This globe with it's simplified yet very accurate geography was good enough to be a teaching tool, and it's size was perfect for at school or at home use. J Chein produced this globe in varying formats until the late 1960's at least.
I discovered this gem in an auction filled with many vintage tin toys, so it's previous owner was obviously a toy collector.  Now it's at home in a globe collection.   I am probably not going to seek many more tin globes out. It's not necessarily " my thing" but I also think that any representative collection of American globe making needs one or two good examples .
I purchased this globe at a Morphy auction in Las Vegas. I had never bid on an item with Morphy but they are part of a new breed of quasi traditional yet heavily Internet integrated auction houses that I want to discuss in a separate post; there is a whole different tact one must take to be successful bidding and buying at these type of auctions.  A much less straightforward process, and a process defiantly designed to spark " auction fever" a disease I've had in the past.......
So......What could have knocked this little globe out of the park.............well what if this globe were still in it's original box.....? That would elevate this little gem from great to extraordinary! 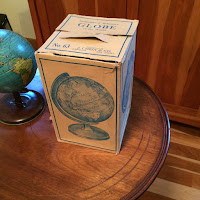 This globe came my way after not having purchased anything globe related in over 6 months. Not for a lack of trying.  There have been several great globes come and go that, as a collector  I have tried to add to my collection but for a variety of reasons just could not close a deal.  Finding this little gem was an exercise in networking, educating myself, and casting a wide net in my search.   Not the "find of a lifetime" but for what its is a great little score.
I'm always fascinated by the search for globes and globe related items I probably spend far more time searching than a lot of collectors, but I LOVE it!!
With that said if you have an old globe in great condition especially Andrews, Holbrook, Weber Costello, or Joslin, I want to hear from you.  I am interested in globes from these manufactures and would love it if you contacted me if you have a globe for sale!
Posted by Kyle at 8:04 AM