This week found me antiquing my way through the Ohio valley,  never before had I found such great antiquing in general as in the many shops and malls in and around Cincinnati Ohio who wouda thunk it......well there it was nonetheless.
Cincinnati is actually an old city by American standards, so it should not be too surprising actually. The places I visited were very strong in vintage industrial, and other re purposed items, being in the Midwest not surprising at all

so what did I find, lets start with the cream of the crop: 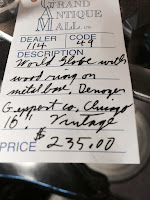 This floor globe is great its a big globe at 16 inches, plus meridian ring it really has a presence all it's own and it comes on an adjustable floor base. It is a  teaching globe as almost all Denoyer Gepphert globes were meant to be. This one shines because it's condition is near mint.  It really belongs in a collection of globes, or at the very least in a home where someone will appreciate that at nearly 60 years old this item has stood up to the test of time.  So is this awesome globe residing in my den right now, being admired and blogged about..........sadly no........why did i pass this great "antique of the future" up?  Well dear reader I was stupid, and it is my slow uptake that will win you this prize. I should have bought this but I had the blinders on and could not see it's potential until it was too late. Email me for the particulars and you can have this great globe nestled next to your Eames chair as you contemplate your mod mod life ...........just don't trip over the Herman Miller coffee table when you get up.....Hipsters....... 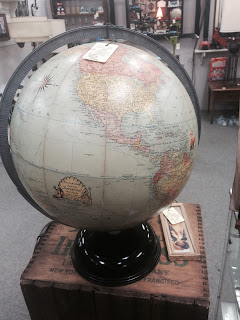 OK OK the  regrets are piling up, here's another little gem: 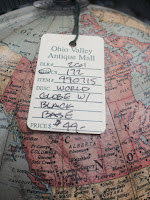 This is a really nice pre war Replogle globe, with a very nice original base, no dents, scratches, or lost map. It's a great 80 year old globe, perfect for someone who is starting out in the hobby, and at under $50 you will never get hurt owning this desk globe in fact it's a bargain at this price. I did not buy it because I don't need it in my collection, and I'm not much of a dealer, so it's waiting for the right person I bet you could bargain them to $35 or $40 and you will have a steal!  Again email me if you want the particulars so that you can locate this one for your own collection. 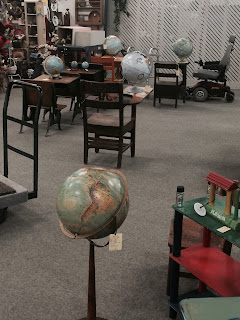 I wanted to share this photo taken at one of the antique malls I visited, they were setting up a " back to school" theme by the main entrance that featured globes prominently.  The floor globe in the foreground was a post war Replogle, as it was being setup I overheard one dealer comment to another, " this is a really old globe, you just don't see old globes anymore"  Interesting observation I thought, I stayed mum of course  that little floor globe was at $49 another bargain I think as it was in nice shape.
Below I need to share something that happens in every group shop or antique co-op in the world, the dealer who doesn't know what they have, is too lazy to look anything up, BUT !!!! dose not want to leave a nickel on the table lest someone with any knowledge, or a smart phone know more than they do about an item: 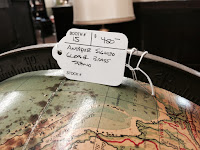 This globe was in positively dreadful shape, absolutely nothing any serious collector would be interested in. Now who else other than a collector would consider $450 for a globe?  What is this dealer thinking?  I guess they are waiting for a fool and his money.


I saw, and almost bought several other great globes that did not make it into this post, I usually see one or two globes when I go antiquing, I could not believe the number of globes at the antique stores this time.  Granted most were of no consequence, but some were real gems.  I hope that exposure to globes in generalist antique settings will spark a collecting interest in someone, It did for me.......
Posted by Kyle at 9:36 PM