Some Globe Rarieties from the Library of Congress

In part one of my Library of Congress (LOC)  post we saw some really nice American globes from their collection. In this post I want to explore 3 of the more rare American globes that they have.
First I want to show a great globe from a company called Pendleton's Lithography, a Boston based company that seemed to make small globes as a sideline to their main business so here it is: 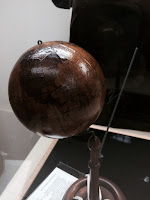 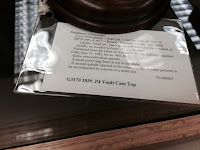 This globe is a 5 inch wooden orb the gores are applied directly to that wooden orb, and please notice the small metal loop at the pole.  This is a feature that is identical to Holbrooks globes coincidentally also identical is the 5 inch size of this globe, as one manufactured by Holbrook.  Did they influence one another? I believe that they did.  This globe is basic in it's geography another similarity with Holbrook.  Pendleton has this globe mounted on a turned wood stand, and at one point in time a moon was probably connected to that metal rod this was a globe and planetary model, a nice upgrade as a teaching apparatus.  I believe ( but could not confirm) that small metal loop was meant for the globe to be removed and put on a string for further flexibility as a teaching model.  Very few examples of this globe exist, Sylvia Sumira profiles a similar Pendleton as globe 49 in her book "Globes 400 years of exploration, navigation and power"  In fact I have used her book as a reference here.
So are there any more of these globes out there still to be found?  What are the chances of adding this rarity to my collection? Almost zero, but ya never know. There are discoveries in the globe collector market all the time.
Lets look at another globe that, although rare is seen from time to time A Silas Cornell globe. 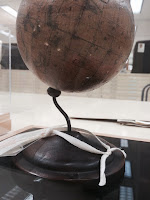 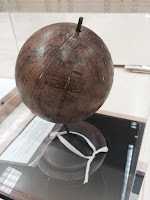 This globe is especially fascinating to me because it was manufactured in Rochester NY just a stones throw from me.  It again is a wooden sphere with gores applied directly to the surface. This example, and all examples I've ever encountered is a 5 inch globe mounted onto a simple wire frame and wooden base, clearly an inexpensive globe at the time of manufacture. Probably meant for student use.  Interesting to note one of these actually went to auction on eBay not too long ago. Here is a link to the David Rumsey collection featuring a similar Silas Cornell globe: Cornell Globe 1845  These globes when they come available seem to always be in less than great condition
owing to their utilitarian nature. As well as the choice for wood as the orb 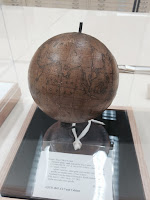 Next I need to show you one of my personal favorites, A Holbrooks 3 inch hinged globe. What an ingenious design, a globe showing A Mercator's map projection on the inside, and an accurate if simplified global projection when closed. As close to a pocket globe as we have ever seen in America. This globe was made in great number and as a rare globe they are still obtainable as they come up for auction somewhat regularly. By regular I mean that they show up yearly or once every other year. eBay has even had Holbrook hinged globes from time to time in various stages of decay.
As a globe meant for children these globes are hard to find in great condition, but the fact that the core of the globe is solid wood helps with the survivability. These globes were also made as a 5 inch orb equally as common as the 3 inch.  I've been in pursuit of this globe for my personal collection for awhile, a great example was auctioned by Heritage in Dallas this past spring. I came close as the under bidder on that one. Heritage runs an unusual auction style that if you are not familiar with it can be a bit confusing to a newbie, I plan to discuss Heritage in another post later.
So here are 2 pictures of the Holbrook 3 inch hinged globe: 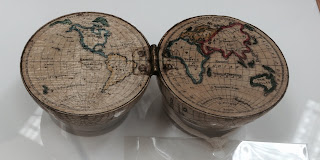 Visiting the Library of Congress was an absolutely wonderful experience as a globe collector. They have many other examples of great American globes just sitting there waiting for you to discover them. Also I know of no other place where you can get so up close to such rarities, a real treat. 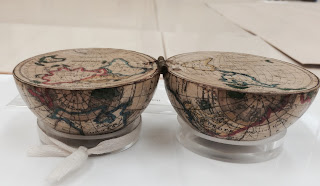 During my visit I experienced some true hospitality and some above and beyond helpfulness from several Globe and Map division staffers, but I must mention one gentleman in
particular.  Mr Edward Redmond the vault curator
of the map division was accommodating, and
exceptionally helpful in my quest to learn more
about these great globes. He is a map lover
himself and the vice president of the
Washington Map society as well.