Well summer vacation took me to Washington DC for a few days, let me tell you if you like heat and crowds you will LOVE...DC in the summer, but  I had the pleasure of visiting the Geography and Map reading room at the Library of Congress ( completely devoid of tourists, and VERY air conditioned ) .   Within their vaults in the basement of the Library's Madison building they house literally millions of maps, and.......... wait for it............about 200 globes....... paltry in comparison, but this still makes for one of the largest publicly available collections of globes, certainly the largest focused on American globes.   Many of the globes in the Library's collection were gifts to the library, and some were purchased on the open market.
So let's get to it and see some globes, first up a James Wilson 3 inch globe:
This lovely specimen was on display in a glass cabinet at the front of the reading room, it sits in remarkable preservation, and for an American globe from the 1820's it really shows Wilson's skill as a globe maker.  Take a minute as I did to appreciate the craftsmanship that went into this tiny globe, the stand is so disproportionate to the item it's supposed to hold.   Not on display was it's celestial counterpart. 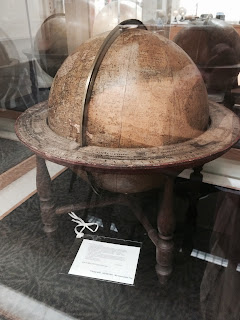 Next to this small globe sat the oldest Wilson globe I've ever encountered a 13 inch specimen from 1811  here are a couple of photos:


In addition to globes on display you can search their catalog and request to see something that interests you that is not on display.  Here is a Loring globe that I requested to see because of it's exceptionally early date of manufacture , and bowing to English standard setting this is a 9.5 inch globe 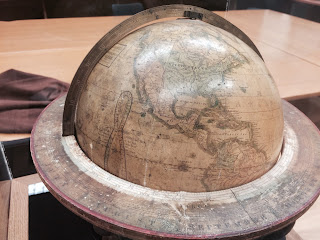 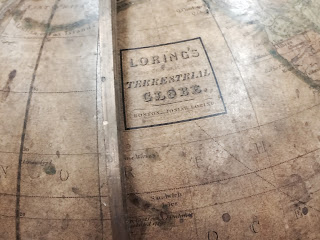 This Loring globe pre dates Gilman Joslin's involvement with globes,I find it  interesting that Wilson engraved his own gores, Loring primarily used gores from England and assembled the rest in Boston, a practice that many early 20th century globe makers continued.
The Library houses it's globe collection way high up on shelves that take a ladder to access, the vault curator confirmed my suspicion that these globes are called for very infrequently. I got the impression that perhaps years pass between viewings, a shame really.
All of the Library's globes are housed inside custom made plexiglass cubes that you can rotate to see the entire object, ingenious and surely expensive but the ultimate in preservation.

In part two I want to explore some unusual American globes.......what you say Wilson and Loring are unusual....HA they are completely commonplace as compared to what I have to show you next..........