Trippensee Planetarium, an in depth look

Trippensee planetariums are an object that demonstrate cross collectability perfectly.  Globe collectors love them, general scientific instrument collectors love them, and astronomy collectors also covet them. That is not to mention that their mechanics and clockwork like design also appeal on a sculptural/ steam punk level. Because of this,  prices for good examples of these planetariums have seen a steady rise. In fact dare I say they are the strongest segment of the globe/ instrument market.
I've been in that market for several years trying to obtain a great example.  I've been constantly chasing higher and higher auction prices in pursuit of one, always falling short. Any regular reader of this blog will know that I'm allergic to overpaying.  I'm sure in a rising market this has been my main stumbling block.   Well just a short time ago I was finally able to obtain an example of a Trippensee Planetarium, and dare I say it's quite a nice one,  lets explore.....


I have here a 1st generation Trippensee Planetarium.  This is characterized by the maple wood construction, later examples are made with black painted wood, still later Bakelite and plastic. This one is early. The maple construction dates this Planetarium from 1908-1925.   It's near impossible to pin down the date more specifically because the construction stayed the same for many years. Even the globe was used for many years without geography updates. You see geography was not important on these devices, so why pay the expense of updating the globe. 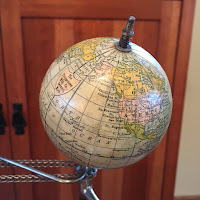 So let's examine the fine points of this Planetarium.  This example is all original, no replacement parts, and no restoration.  The small Globe ( by Rand McNally) is the most delicate and therefore usually the first piece to show heavy wear. Here we see that the globe remains bright, legible and near completely intact.
The next area of concern for these planetariums is the brass sun, they do dent fairly easily, and the brass wears away sometimes. Here again dents have been avoided and the brass finish, though not perfect does retain its luster.   All of the gears are intact with proper chains. The compass built into the arm is of course present and functional.  This example functions smoothly and correctly, in fact my son and I played with it quite extensively and it is a robust mechanism. I see why these have survived in such numbers even 100 years later. 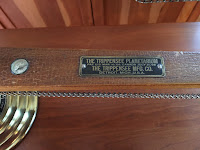 I would be hard pressed to find a better example.  It was especially important for me to find one with an intact and clean globe.   I did not find this one inclusive of the original wooden crate,  a precious few still boast this. Trippensee Planetariums can be broadly placed into 4 age categories each with its fine points to consider as well as price differences.
The oldest Trippensee Planetariums are actually just re branded Laing devices. They are characterized by string pulley systems and wooden gears. Rare and expensive they are seldom seen and usually need professional attention to be functional, they all sport the same Rand McNally globe as  these later models.  The oldest planetariums of Frank Trippensee's design came in 1908 and they feature the maple construction, brass, and chain drives as is seen in the picture at the top of this page, they were manufactured roughly from 1908-1925. The later maple planetariums of the 1920's had oval name plates with serial numbers stamped on.
Around 1925 and continuing until 1940 or so Trippensee planetariums were still made of wood, but now the wood was painted black, they also had oval name plates with serial numbers.   I have been trying to purchase one of these for a while and I decided some time ago that when I did purchase one of these devices I wanted it to be one of the earlier versions.  Nothing against the Bakelite and plastic planetariums of the 1950's these older examples just appeal to me more. I'm clearly a sucker for the brass, wood , and paper combination.  it just screams I'm old I'm from a different time, and I love that.
A while back I wrote a blog post titled, " sometimes it's OK to overpay"  well this in my mind is one of those times.   Every year that clicks by these devices become harder and harder to find.  It was with this in mind that i decided the time to move was now.   Also when you love something it's OK to pay up to obtain such a thing.
I wouldn't be a globe blogger if I didn't take time to explain more about the globe used on these planetariums.  It is a copyright 1891 Rand McNally 3 inch orb.  Rand McNally produced this globe as the smallest in their line and fastened it to a multitude of different bases.  It's no surprise then when Laing/ Trippensee needed a small globe for their tellurion they went to Rand McNally.  This globe with it's 1891 geography was used into the 1930's on these tellurions, earning a far longer life than would have otherwise been warranted. To the right is a picture of my Rand McNally 3 inch next to the tellurion globe. Both cartouches are in the shape of a shield, one reads Rand McNally, the other Trippensee, but they are otherwise identical.
in closing while researching I stumbled onto something intriguing, a patent from Frank Trippensee dated 1909 for a different model tellurion.  An expanded device that added a second horizontal arm and then attached a Mars globe at it's end.  You can read the complete patent documents here: Trippensee mystery planitarium   I can't find any record of this device actually being manufactured ..............what might have been........

***** Update!!    In certain areas of collecting there are levels of completeness, for example in book collecting having the dust jacket of a book that was originally issued with one is much better than not having it.  Well with completeness in mind  I started searching for the original manual that would have accompanied this device.   Now over the years so many of these planetariums got separated from the original instruction manual. Remembering that these were used as instructional aids in schools.  The original manual is a rare sighting, now they do pop up from time to time.   As luck would have it I stumbled into a copy using a search technique that I've used in the past.  Once in a while you can score a great find looking on eBay for misspellings and  mis-categorized listings. That was the case here a slight misspelling and a not ideal category choice let this handbook slip through the cracks so to speak!
This instruction manual was copyrighted in 1908 by Howard Hovey, it was included with each planetarium sold and was unchanged until the early 1940's when the device changed to Bakelite and plastic construction.  Interesting to note, on the title page inside the cover the Trippensee company dated the manual and I believe it was changed each year this date looks to be separately stamped in so if you have the original manual with your planetarium then looking at this title page should give you the exact year of manufacture.         Now having an original booklet really elevates this item because the vast majority of these planetariums do not have the book available.   This is true of vintage globes in general each of them originally came with a handbook, Joslin, and Andrews produced hard cover books, most manufactures produced soft cover booklets . Certainly having the original handbook just adds to the total package. In the case of the Trippensee tellurion it adds guidance as to how to actually use the thing intelligently, a wonderful find.