On the antiques trail in New England 2017

This past July into August gave me a chance to do something I've always wanted to do.  That is take an antiquing road trip through New England.  We started our journey in Portsmouth NH. We wound our way to Bar Harbor, then across interior Maine to Northern NH then onto Vermont.  I want to share some  observations on the antique market as well as some tips should you go off on a similar journey.
Firstly let me set the scene for you,  I am primarily interested in antique cartography, especially globes as you might guess but I do love some other categories of things. Most notable are folk art, advertising, and old photographs.  So on the antique trail I've got my eyes wide open for many different things, and my wife is searching for even more!
Our first day had us traveling from Portsmouth to Bar Harbor, we took the fabled route 1 north instead of  the interstate.  Route 1 is touristy to say the least Kennebunkport has some shops that cater to casual interest, selling mostly overpriced smalls,  things that travel easily.  I had always herd that Wiscasset Maine was an antique paradise of sorts. We planned a long stop in their quaint downtown and were rewarded with a dozen or so independent antique shops to sample.
Wiscasset had something for everyone some shops were very curated and very high quality, others were just one step above your local flea market.  Most were between these extremes, however with few exceptions most shops concentrated on tchochkeys, smalls that just gather dust,  unless it's a small globe I can't stand buying those things.  To each his own........ so Wiscasset was worthy for its sheer volume,  I would stop again.
Our next outing took us from Bar Harbor, across interior Maine.  There is no worthy antiquing in and around Bar Harbor it's a tourist den,  a beautiful place, just not an antiques place. So Bangor was my next stop.  What a great town ,  just starting to get away from the route one tourism I found a fantastic place to shop, a well run group shop,  not a true " mall" but a group shop with about a dozen like minded vendors. Called aptly : Central Maine Antique mall  I recommend you stop if you are in the Bangor region it's even worth a drive for it's quality.   This place was exceptionally well run, not much to look at from the street but inside just quality vendors, no junk or flea market trash like so many other malls.  I found a " wicked good" medical cabinet from the turn of the century in excellent original preservation.  Problem was, no matter how I jockeyed my seating or luggage I couldn't fit this beauty in my car, short by less than 6 inches. I thought for sure the top and base would separate, no such luck.  I hated leaving this piece of furniture behind.  I was already arranging my smaller globes on those shelves in my mind when I discovered that things were not going to work out.  The worst part......the price.......hundreds less than I was expecting...... the knife was twisting.......
Into and out of so many small towns with small antique barns, sheds, sometimes just a pile of junk suggesting a sale, we stopped at them all. The interior of Maine was full of such places.  None as good as this Bangor shop.  Here's a pic of a typical shop. You just never know what overlooked piece of bounty might be lurking , I swung into 50 such places, empty handed I left 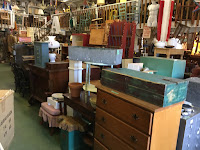 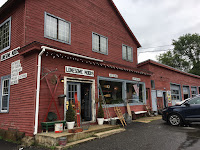 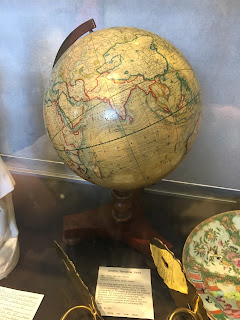 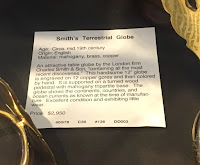 My travels next took me across New Hampshire and into Vermont, here things turned promising again.  In the town of Quechee VT. I stumbled into an exceptional antiques shop.  Antiques collaborative is a decidedly upmarket shop.  3 floors of exceptional 18th through early 20th century antiques, the type of early Americana that the New England area is known for. It was here that I spotted my first globe, an English Smith's globe, an attractive mount. Here are two pictures.  This globe was in exceptional condition, I'm not going to comment on the price, this is a retail environment, haggling is somewhat expected.  I'll let everyone judge on their own.

As you can see It didn't matter to me weather the shop catered to the 1% or weather you needed a shower after visiting, I stopped at them all.  There's an education to be had at all levels of the antiques trade.
Further on down the road I stopped into an excellent group shop in Middlebury VT,  The Middlebury antiques center  is a comfortable mid range shop with an eclectic mix of quality dealers, no junk, some higher end offerings, but mostly just good mid range items.  One dealer in particular seemed to specialize in antique cartography: 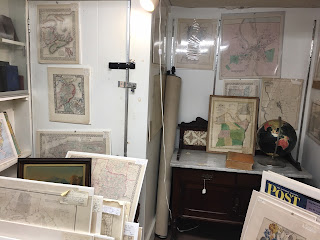 The final stop of my 3 state Odyssey was in Shelburne VT .  Here I again found a great multi dealer shop with the type of 18th and 19th century merchandise I like. The Champlain valley antiques center is just south of Burlington VT certainly worth the trip if you are in the area.   I went back and forth over several items in this shop,  an old blanket chest, and a mounted fish decoy,  both items way out of my wheelhouse, but I couldn't shake them! 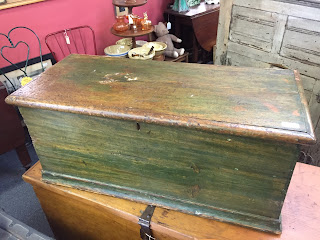 OK, I know what some of you are thinking,  " Kyle this is a globe blog,  I don't want to read about some Fu#@ed up wooden fish and a crappy trunk"   well suck it up were almost finished.....

Neither of these items made it home but as I type this I'm thinking I made an error, especially on the decoy.  they wanted less than $100 for the decoy and it is defiantly hand carved not machine carved, I think I really should have grabbed that one,  If you're near Burlington, grab this decoy I think it's a bit of a sleeper!! 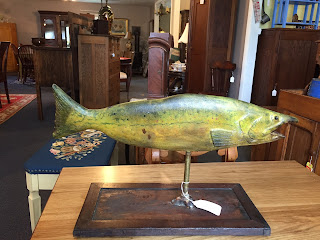 The trunk.......gosh I don't know a damn thing about old paint, I was scared of making a mistake with an item that I liked but knew nothing about.
Well minor regrets but it was good to be out in the mix seeing antiques on the ground, not on a screen.  One thing I realized is my romanticized view of antiquing in New England is still somewhat available, but the antique selling marketplace has shifted online, and to mega antiques events like the annual New Hampshire antiques week  that it's almost not worth running from shop to shop over 1000 miles.  I'm glad I did if for no other reason than this part of the country is old, and an antique in itself, I saw so many charming things village to village that in itself  was wonderful.
Posted by Kyle at 8:13 PM