If you've followed this blog you will know that I have been trying unsuccessfully for years to find and acquire a nice example of an Andrews terrestrial globe.   They have eluded me at every turn.  I've missed BIN on eBay by mere minutes ( more than once)  I've been outbid as recently as this spring at a Neal auction. So suffice it to say it was a total surprise when one fell into my lap when I least expected.
I've referred to this globe as my "white whale" in several other posts,  so many close encounters ,  so many missed opportunities.   So lets review this particular example ,  lets tear it apart with a critical eye and understand this globe and it's path through history.  But first my globe's back story.
I saw this globe on eBay several years ago, as a BIN.  I remember the price, but suffice it to say that it was substantially  " below market".  I sent off a few questions regarding condition, and I waited patiently for a response, while I waited a competitor swooped in and purchased this globe They obviously had a clear understanding of the opportunity.  So...... I missed out.........  not one to give up easily, and with remorse setting in,  I promptly contacted the eBay seller and offered them MORE money if they would just cancel the sale.  So I know what your thinking,  " that's a dirty trick"!  Yes I'll admit not a smooth move.  we needn't belabor the ethics because the seller didn't respond to my inquiry anyhow.
Fast forward more than a year,  I'm having a casual email conversation with another collector, and I mention my desire for an Andrews terrestrial globe.  He then mentions that he found one on eBay some time back,  sure enough it was the same globe I had missed!   I never mentioned it again. I was glad to know another passionate collector owned this  particular globe.
It was just last week when this same collector, passed this globe to me when it came time to sell,  so here it is I want to share an exceptional example of  A H Andrews handiwork:

This is an Andrews 8 inch full meridian globe, measuring about 15 inches high, it is supported on a wonderful turned walnut column and base, brass hardware, brass meridian, just a fantastic period construction.  Seeing an Andrews globe such as this up close it is easy to see why they are amongst the most desirable American globes sought after by collectors. I've always thought that because Andrews was already using so much wood, and metal in their other school, furniture endeavor that it just naturally transferred to their globe production, with delightful results.
The turned wood base is my personal favorite, it was not the most expensive at the time, but in this blogger's opinion it adds to the form.  Most desirable would be the tripod Gothic metal stand.  My example is not a full mount globe because it is without a horizon ring, Andrews sold this globe 3 ways  (good, better, and best if you will) it was sold as offset mounted ( good)  or with full meridian ring ( better) or as a full mount( best)  with corresponding graduations in price for the buyer. Here I have a photo from the Andrews 1885 catalog, showing their 8 inch offerings: 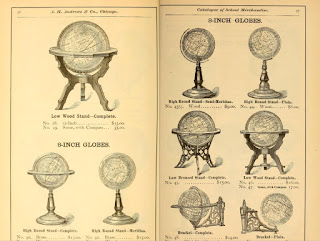 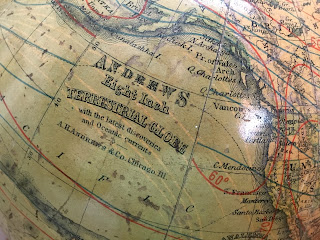 This particular 8 inch specimen is a wonderful example of how you hope to find a 130 plus year old globe.  There are signs of use, it is not too crisp and clean, it lies in that sweet spot that I love.  To restore this globe in any way would be a sin.  The map is intact, there are some surface rubs, and minor abrasions, the base has some signs of having spent years in a classroom. Keep in mind that these items had a utilitarian purpose.   Just a great example of A H Andrews work, the quintessential small globe.  Here are a couple more pictures. 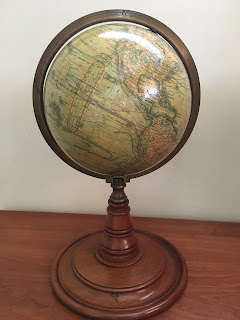 I'm always amazed at how well these globes are made solid brass meridian rings, high quality wood, they were built to last. These were factory made mass produced items also.          It's a far cry from the globe construction post WW2 when things were little more than pressed cardboard and stamped steel.

These models from Andrews have everything that got me excited about old globes in one package,  art, science, and history.  There's just something about the Andrews large dish mounts that are just right, the wood, brass, and paper. Everything perfectly proportioned,  I love it!


I've been seriously hunting globes for a decade now, and although they turn up, Andrews globes seem to be far scarcer than those of their contemporary Gilman Joslin.   I've often wondered why that is?  Did Joslin sell in much higher numbers?  Were Andrews globes less robust in their construction?   Did Joslin focus on the home market  instead of the school market, obviously affecting their survivability?  As I sift through the Andrews 1885 catalog i see so many models that were sold of which I've never even seen one in museum or library collections.  They are out there for sure but a decade of Internet search later and I think it's safe to say these things fall into the rare category.  Knowing what I know about Andrews they were in the 1870's and 1880's a much larger operation than Joslin ever was.  These globes that came out of the Andrews factory in Chicago would be some of the first of the Chicago globe makers, a group that would come to dominate globe production for the next 100 years.
I want to share another photo and do a bit of compare and contrast.  In this next picture I have the Andrews 8 inch next to another 8 inch globe of perhaps a decade later, the other globe is a Star Eraser globe from 1885 ( Congo free state is present)  I took this picture because as i was studying the cartography of the Andrews I could not help but notice many similarities with this other globe's map.  These globes are both isothermal and it was uncanny how exactly the printing of the isothermal lines matched. There are other similarities also I can't help but wonder if each company sourced their gores from the same place?  Granted there are differences, ocean currents are far more prominent on the Andrews, that is in some ways their hallmark.  Also The star globe was produced with far less expensive materials for the stand and meridian, quite a departure in just 10 years , something to explore in another post probably.
I hope you enjoyed seeing this globe as much as I have enjoyed sharing it.  As always please do not hesitate to drop me a line via email, or to post a comment or question below.
Posted by Kyle at 4:12 PM