I've been on the lookout for an 8 inch full mount Weber Costello globe for quite a long time.  The smallest size that Weber produced in a full mount fashion is suprisingly difficult to find.
Weber made quite a few 12 inch full mount globes for both home and school, and good examples come up for sale regularly, but the same cannot be said for the smaller 8 inch version.  Eight inch globes were produced in much smaller quantity and among those full mount examples were a small part of the output.

This picture above shows the huge size difference between an 8 inch and 12 inch globe, adding to the desirability of this 8 inch globe is the greater versatility you have when you are looking to display. The perfect size for a bookshelf or a mantle the 8 inch globe goes places a 12 inch globe just can't fit.
This would have been, at the time about 1928 the best 8 inch globe Weber Costello sold.  This globe was offered in a total of 3 configurations, a basic offset mount, then an upgraded mount that added a graduated meridian ring, and finally the full mount version that then adds the wooden horizon band. 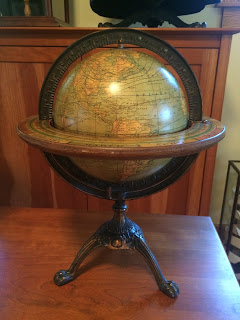 Lets talk condition;  the copper plated metal stand is in fantastic shape, and the horizon ring is better than 95% intact, there is one small blemish, but far better than normally found.  The orb itself is also better than 95%, there is one scrape in the asia area of the orb, and another small pencil eraser sized blemish near greenland but these are fairly minor and there is no loss of map.  Important to note, often times these globes suffer scrapes in the Antarctic region from at one time or another being taken off axis.  This globe has none of that,  this globe still retains the thumb screw at the base that when present helps prevent such damage. 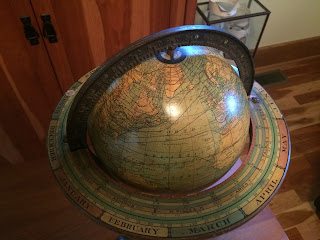 Also of note the isothermal lines are still present the blue is still strong, the red ( most prone to fading) is present boldly in the southern hemisphere, and faintly in the north. This is most common.   All in all a great addition to my collection.
But that is not the whole story about this particular globe, there's more..............

Weber Costello as a company made globes for many other resellers. Often times the resellers label would be posted neatly over the Weber Costello cartouche. Often called an over label.
This particular globe has what I think to be a very interesting over label.  The over label on this globe is for none other than A. H. Andrews of Chicago.  Now some of you will know that C. F. Weber bought A. H. Andrews globe making business out of bankruptcy in 1895.  Keep in mind that globes were not Andrews' main business.  Their main business was school furniture, and that portion of the business was reorganized and continued in Chicago long after 1895.   So fast forward 30 plus years after that sale to C F Weber and you have Weber Costello a globe powerhouse in Chicago. You also have A. H. Andrews making school furnishings, chalkboards, theater seats and even restaurant furniture ( think booths and tables).  But they don't make globes, no problem because Weber Costello across town does.
So Andrews sells out to Weber in 1895, then many years later goes back to Weber Costello to contract for some globes to sell along with the rest of their school line.  Of course they, like any other reseller want their name on the product, and Weber Costello obliges. The result is this globe; where Weber Costello produces an Andrews over labeled globe.  The globe business in this case came full circle!
I have to admit I'm a bit of a small globe nut.  I am running up against the problem of space.  You can only safely display so many globes before you start to feel cramped.  I am getting close to that capacity now, but there's something else also. Small globes, especially these small full mount examples are almost an exercise in form over function.  The proportions are just right,  a scientific sculpture...