Let's check this globe out together.  The Weber Costello Peerless 6 inch instructional globe.  A low cost globe, mass produced for the sole purpose of giving each student in a classroom a basic globe at their desk.  Usually the teacher would then teach from a larger more detailed globe in front of the class.

This globe was patented in 1909 and produced for in excess of 30 years.  A 6 inch pasteboard orb, a simplified map, and an inexpensive bent wire stand.  Really as absolutely basic as you can be and still be a functional instruction device.  This globe reminds me of the plastic recorder I received in music class, an instrument, yes..........but barely.
So this globe was mass produced by the thousands, and is available all the time on eBay.  That is if you want a worn out roached example.  The hard part of collecting this little beauty is finding one in excellent shape.
You see this globe was made inexpensively and then put in the hands of kids, it just was not meant to survive.  Good examples are few and far between.  I am very luck to have an exceptional example to show you here: 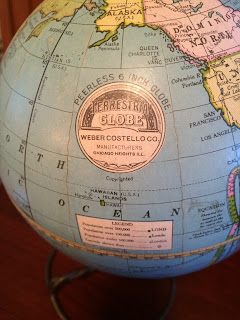 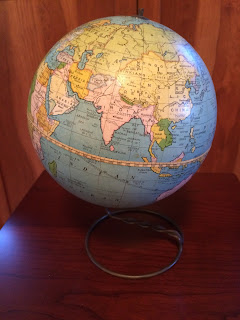 This globe dates from about 1928 Leningrad is present, after 1924, and Central Australia still exists ( 1929)  There are bold simplified colors, just as when new.  A great little globe to have in my collection.  I love this globe because it did survive!  I also love that it is small, I'm having quite the globe related space crunch lately.........ah  modern problems.........
My goal as a collector is to assemble a representative collection of American globe making from 1830 to 1950  and this little schoolhouse number is critical because it represents the essence of globe manufacture in the early 20th century, that being for the education market.  I've found that there are a group of collectors who frown on globes intended for schools.  I on the other hand have come to understand that because of school demand globe makers were able to flourish in a way not seen before, and because of that competition we have innovations that would not have come about otherwise.   This globe is a new favorite for sure!
Posted by Kyle at 10:58 AM