Planetarium: A type of mechanical model designed to portray the orbital motions of the planets and their moons. Made for teaching and exhibition

Orrery: A model of the solar system, sometimes it is mechanical,  named for  Charles Boyle the 4th earl of Orrery

Tellurion: An instrument that shows how day and night and the seasons result from the tilt of the earth, its rotation on its axis, and its revolution around the sun

Alright, all 3 terms are similar, and related, but tellurion most accurately describes this device:

So what is a tellurion, and should I own one?  Let me explain, and yes, start shopping AFTER I buy mine!
Ok think back to ninth grade earth science, this was probably your first encounter with a tellurian, it most likely plugged into the wall and the "sun"  lit up, and you watched as your teacher rotated the gears and explained the moon phases, the tilt of the earth, winter and summer, ect.
Pictured above is an exceptional example of a Trippensee tellurion, complete with it's original case. Trippensee tellurions will be by far the most common devices found for sale, they manufactured these in varying forms for 100 years.
The company got it's start as the Laing Planetarium company, patented in 1897 by Alexandar Laing, and manufactured in Detroit Michigan early devices will bear this name, also the earliest of these machines will have string instead of metal chain mechanisms, In 1905 Ownership changed and the company was re-names the Trippensee Planetarium company independent until 1999!
It's not surprising that a fair number of these devices still exist even after 100+ years, if you think that schools bought them by the thousands. Most desirable ( and expensive) will be tellurions of wood, and brass, in their original cases.  Much less expensive to acquire, but still desirable are examples from the 1930's and 1940's such as this one:      This is an nice example of a tellurion manufactured in the 1930's  Bakelite, and other plastics replace most of the wood and brass the earth globe is still a detailed model, really a nice device, it will display well and is much more easily found.
Sometime in the 50's these devices were electrified,  and another change in materials was made, with a clear eye towards cost, and ease of manufacture  this example is from the 1950's and marks the newest I would consider collectible, these are readily available and nice examples should not be hard to find, notice below the globe is very basic, what could be made of plastic is, but still perfectly functional, possibly more so with the electrification.


I have to confess I  don't own any of these wonderful objects, certainly not for a lack of trying, I've passed up several great opportunities for purchase and have thus far been unsuccessful.  Tellurions appeal to me on several levels, they are scientific,  sculptural, as well as historic.  I especially love the look of the oldest Trippensee models, as I've said before there's just something about wood and metal in an objects construction that just seems to scream history! 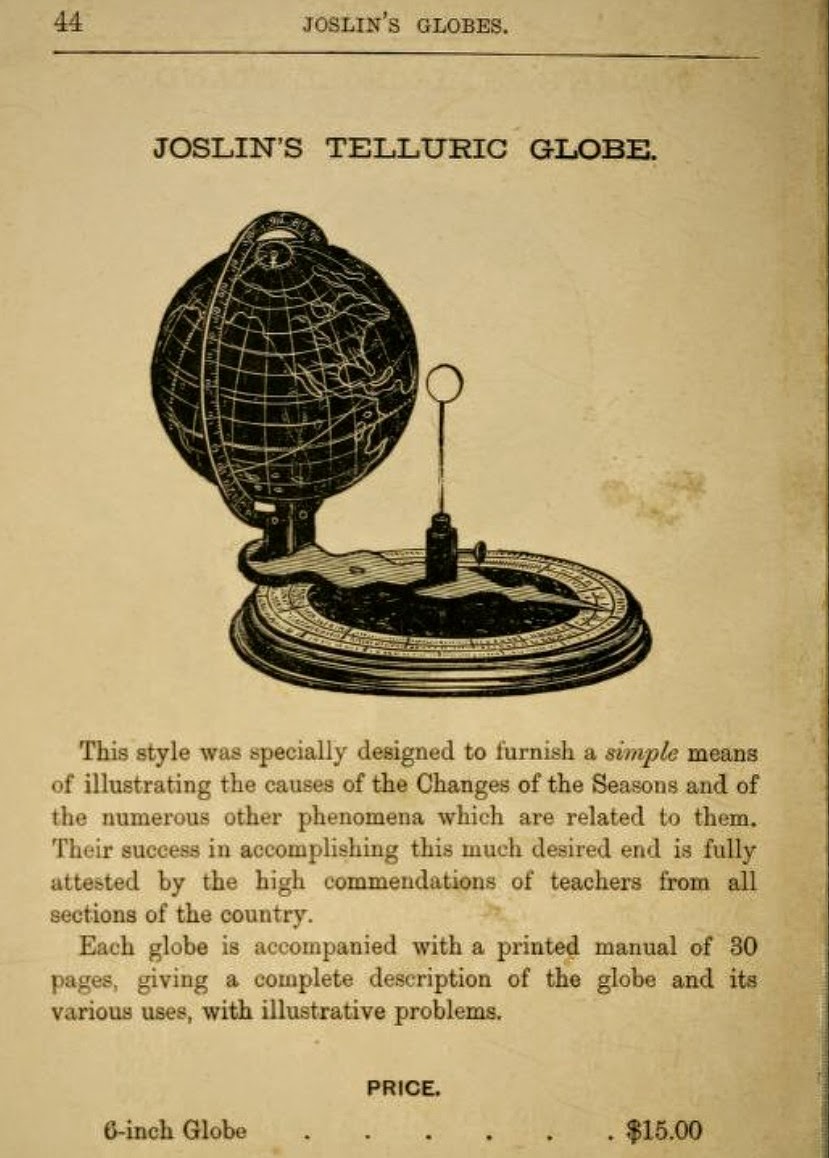 Finally, I have focused on Trippensee tellurions here, but these devices were made by many other manufactures here and in Europe, some of the earliest European models will have a candle for the sun, these are hard to find in any condition, Also Gilman Joslin produces a successful tellurion in the 1860's that sometimes comes up for sale,  it is pictured to the right from a catalog listing.  As always, lets discuss!
** The color pictures in this post were used with the permission of Dee Wiemer, she owns a great Etsy store called Upstarts ( please see my links section) , the 1905 tellurian is currently available on that site, the other two are sold**
**Historical research: coachbuilt.com, Wikipedia.com, and Omniterrum.com**