So, how does an aspiring student learn geography 120 years ago?  Well with this trusty Rand McNally student globe of course.  This small wonder is a Rand McNally 6 inch student globe copyright 1892, it stands 12 inches high and is a simple yet elegant design, that was easily  mass produced for student use.  A 6 inch orb, is offset mounted on a simple fruit wood stand. The globe is of some sort of pasteboard or very thin plaster construct. It is very light and rotates freely for easy viewing.  The perfect small desk globe, it was retailed for approximately $1.50 to $3.00 depending on base selected, and size of orb ( also available as an 8 inch model) Contrast that with the Joslin globe earlier at $17 and we can see that this was an affordable way to give a student the benefit of a globe without the high cost. Realistically a family would probably buy one globe to share, also schools might have purchased these for classroom use.
Obviously with low cost comes flimsier construction, this globe is a wonder in survival, not only did it survive a child, or several children using it, it also escaped the countless attic, basement and closet clean outs over it's long life.
I've been on the hunt for globes for 7-8 years now and in that time this is one of only two I've seen for sale. I can't imagine many of these little gems have survived to today, it's just not the type of thing that would have. Thousands of these globes were sold over the years, Rand McNally also sold it's orb to others for re-branding such an example can be found at this link: http://www.davidrumsey.com/maps3748.html  This example with a cast base was retailed by American Globe and School supply company, but it's the exact same orb as shown here, a common practice. 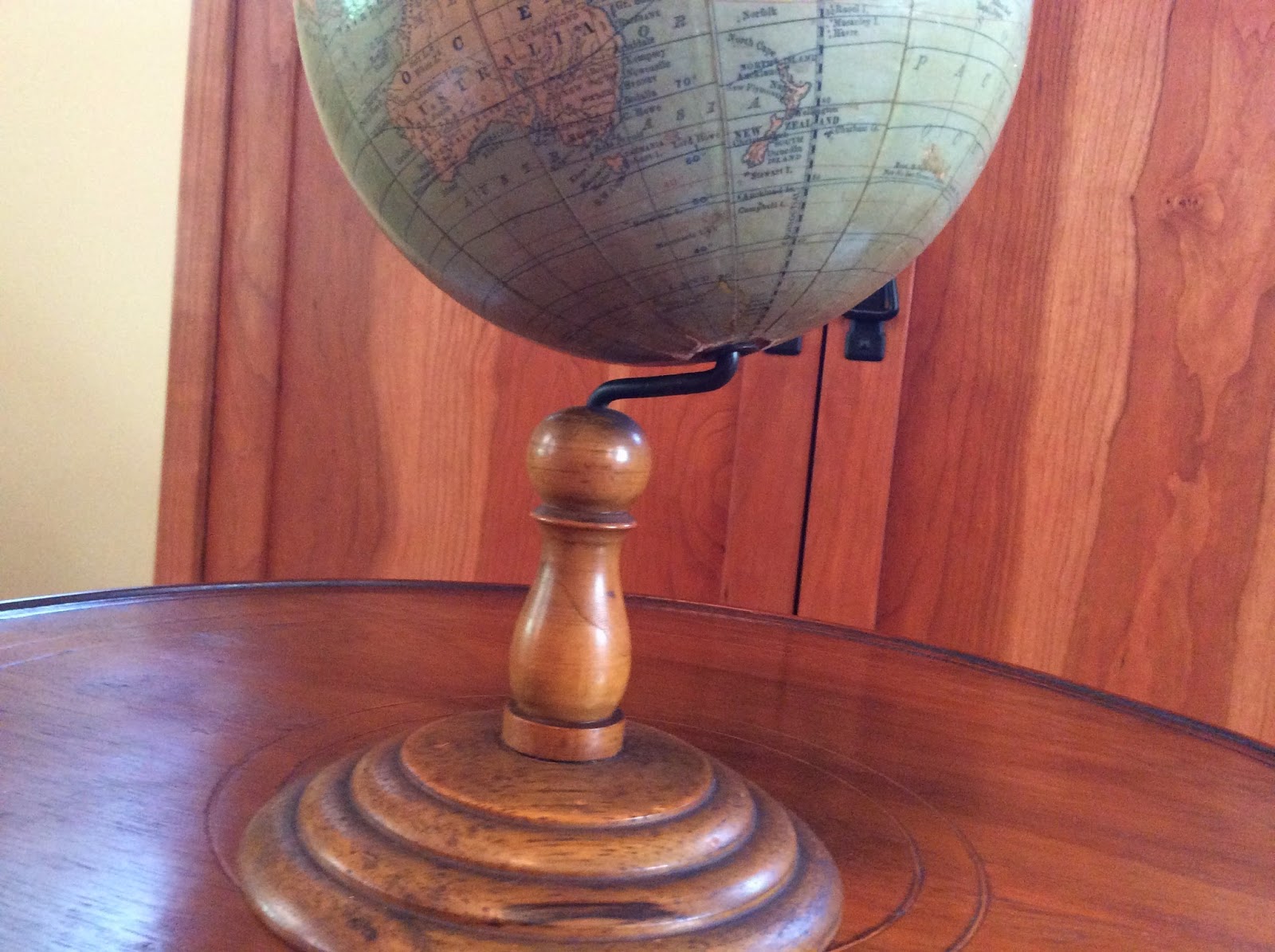 Lets talk condition, this globe is far from perfect, defects include a darkening of the finish as well as some splitting at each pole, in addition to some general scuffs, and rubs. With all that in mind it's easily in as good a condition as I've ever seen this model. One will have to allow for a bit more  "evidence of use" with a student globe than a pure desk globe.  I don't want to paint too grim a picture, this globe shows very well, and is completely legible. It also has that authentic look that only age can impart.  All original nobody tried to "fix" anything, it's just right.  This globe is mellow and warm  a perfect display piece, much more than it's simple history!  A favorite...
You know an antique is only original once, and the minute it's over cleaned, or over repaired, there's no going back, collectors almost always appreciate the original over a restored example.

UPDATE:  9/20/14:  I love researching, I love finding out more about these objects and the companies who made them. In Murray Hudson's database he shows an example of this globe at this link: Rand Mcnally's first school globe Interesting to note that this model is the first globe made for school/ students., an interesting tid bit. More importantly  his example is dated 1891 not 1892.  Big deal right........well yes I think it is. Here we learn something about Rand McNally, they ( at least for a short time) updated their copyright every year, so when dealing with an 1890's Rand McNally the copyright year is the year of manufacture.  This did not last too long by the early 1900's the copyright probably was not as accurate, and after that Rand McNally stopped dating their globes,  an un-dated globe is current longer than a dated globe.