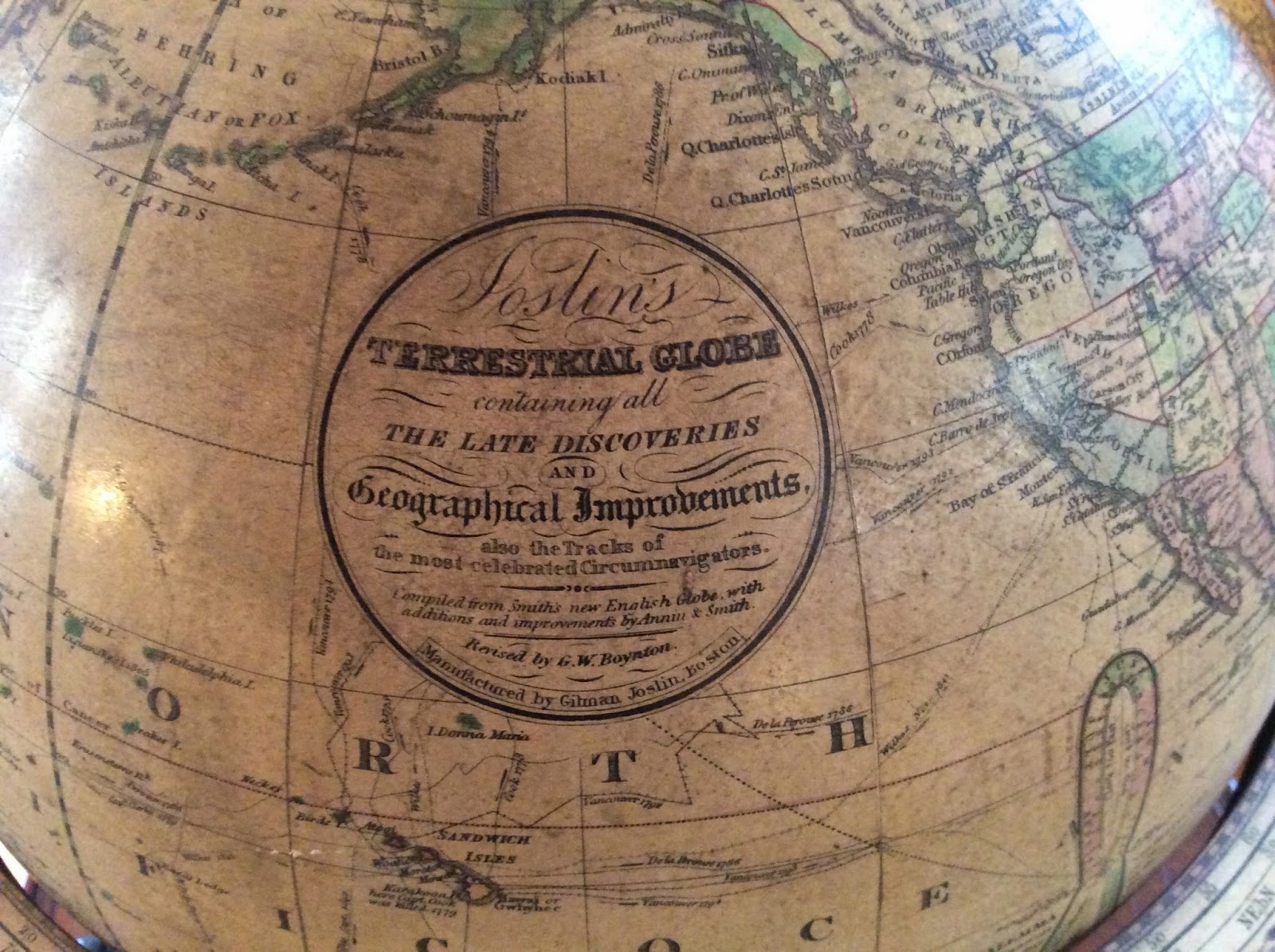 One of the most prolific globe makers of  the 19th century Gilman Joslin produced globes for nearly fifty years.  It is because of this longevity that today Joslin globes come to market regularly and are some of the most accessible globes from the 1860's to 1890's.   Several times a year nice examples of Joslin globes are offered for sale through mid to high end auction houses in the United states, occasionally Ebay has one for sale.  Prices for Joslin globes vary widely based on condition, age and mounting style.
I am fortunate to own one Joslin globe, but I have to say.... I want more!  My example is a delightful full mount 12 inch table globe from 1890, with the most desirable heavy bronze tripod stand.
What I find appealing about these globes is their look.  Joslin made globes for many years using the same mount designs. Until you get up close you can't tell at a glance weather you are looking at an 1865 or an 1895 globe, only the political boarders give away the date of production.
So these globes were designed in the 1860's and early 1870's and looking at one you know it's old.  These globes carry the weight of 150 years, as a history buff I can't help but think about the time and place these beautiful objects were produced.  I look at the globe I own and I think about the world of 1890, The automobile although invented had not hit the street . Travel by steam locomotive by land, and ocean liner at sea was the height of luxury.
I can't help but think who purchased this globe originally in 1890?  What did they think of the world they were exploring with the use of this globe?   At $25 this was a luxury purchase in it's time.
Could the person purchasing a globe like this possibly imagine that in 10 or 15 years they would be driving an automobile? Or that in their lifetime man would take to the sky in the airplane?   We think about how fast our world is changing today, I can hardly imagine the profound technology changes that folks living in this past era experianced.
Getting back to globes from this era there are several interesting geographical features, that are present.  Firstly up to about 1895 or so, the Antarctic region is largely blank, fascinating that a whole continent is missing!  Secondly for U.S history buffs until 1889 Dakota territory was one large area instead of 2 separate states, also the Hawaiian Islands, are refered to as the Sandwich Islands.  Not to mention the Austro-Hungarian and Ottoman empires in Europe.
Joslin as a mass producer, made models as small as 6 inches and as large as 16 inches, over many decades, for schools and homes. A collection of his globes exclusively  would be quite an accomplishment.  Here are a few more scans from the same 1885 catalog. 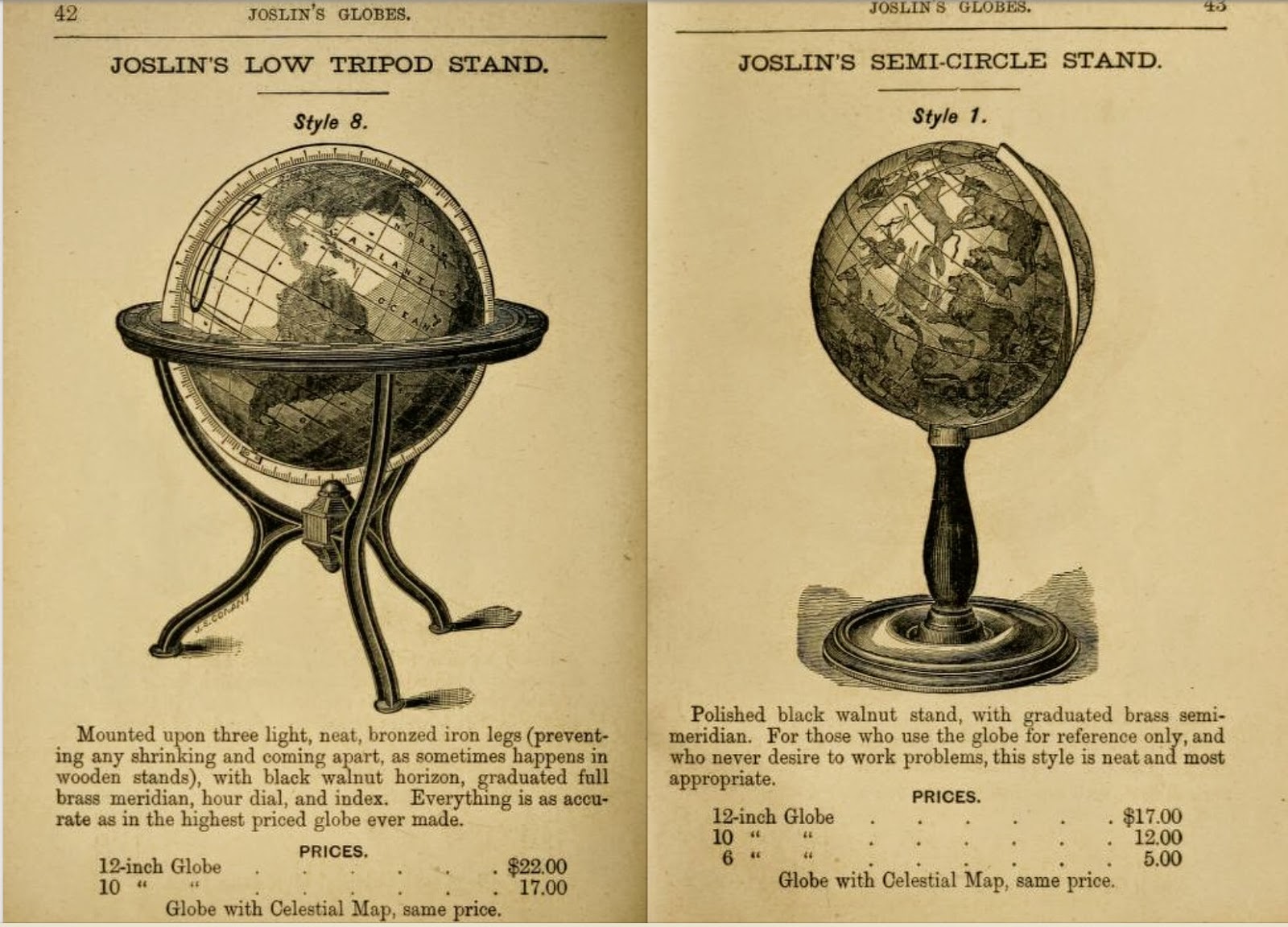 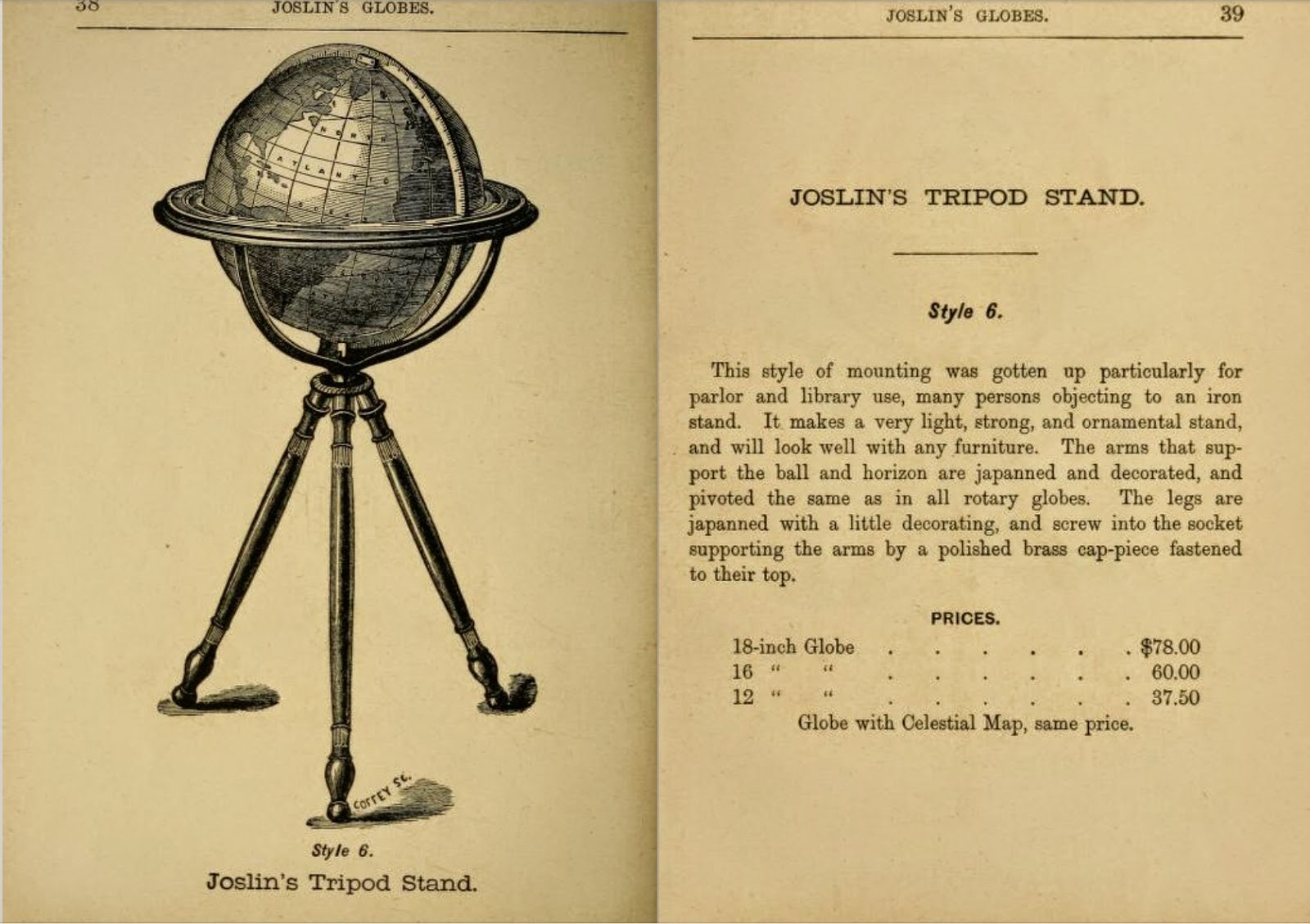 Joslin was the last of what I call the first wave of globe manufactures in the U.S. others I would include in this group are of course Wilson, Holbrook, Nims, Lorring ( Joslin's predesessor ) , and Shedler. These were all east coast based manufactures.  With the second wave producers such as Rand McNally, Weber Costello, and later Crams, and Replogle we see production  center in the Midwest.  Joslin never made the move and ended globe production near the turn of the 20th century
In closing this post I'd like to offer a personal commentary on American globes from the 19th century.  These globes are crafted with the pride of a new country, a country in the midst of a huge industrial and geographic expansion. The quality of craftsmanship displayed in these globes, and mounts is superior to much of what came after it in the 20th century, of course these companies were selling to the wealthier members of our society.  The majority of Americans living at that time could not afford one of these globes. Perhaps therein lies these companies downfall, because as we'll see when globe production moves to Chicago we start to see the full effect of large scale mass production, less robust materials, and less hand production; but a dramatic fall in prices that makes the globe more accessible to everyday Americans.
Posted by Kyle at 10:04 PM