I want to share something really rare, that word can be overused, but not here.  This is a terrestrial and celestial pair of globes, both 1930 Rand McNally full mount 8 inch globes. they did not come to me as a set they came actually separated by four years!  I purchased the celestial globe first 4 years ago, one of only 2 that I've seen in that time, and it's terrestrial mate was purchased earlier this year the only one of this model I've ever seen come to market. my white whale.....
A word about 8 inch globes, they are much smaller, and much easier to display than 12 inch globes, and therefore are highly sought after. Of course they were made in much smaller numbers than their larger counterparts, and fewer still were made as full mount globes. The majority you see will be offset mounts for schools, this pair was probably made for the home.
Globes traditionally were sold as pairs, after 1850 or so with mass production, schools and students began to purchase the terrestrial globe in far greater number than the celestial.  Manufactures responded to market demands and terrestrial globes have dominated, celestials were often still offered but just not purchased as often.
I should clarify that Rand McNally in 1930 would have offered these globes separately, but one would have been able to choose to make a set by buying both. 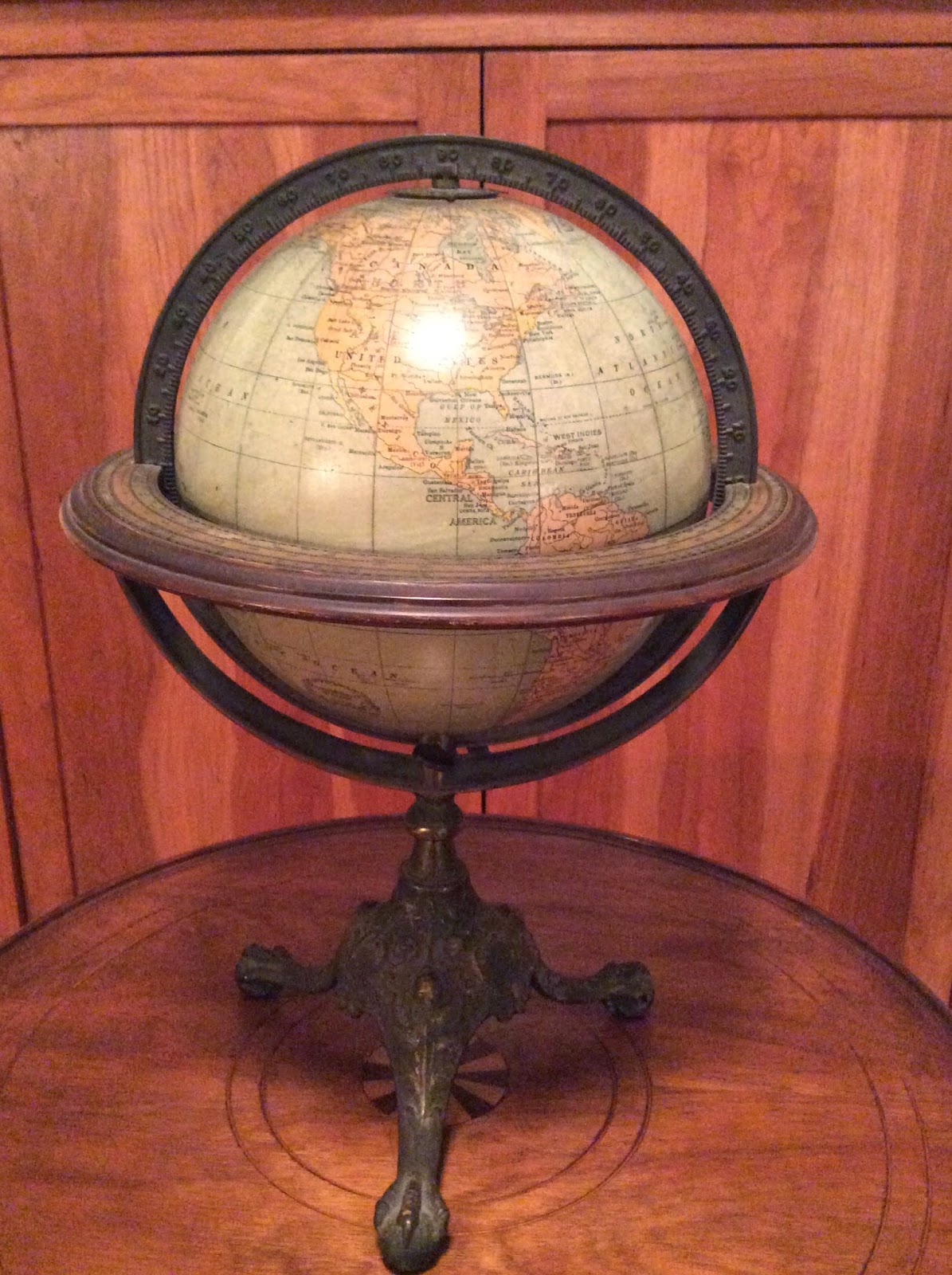 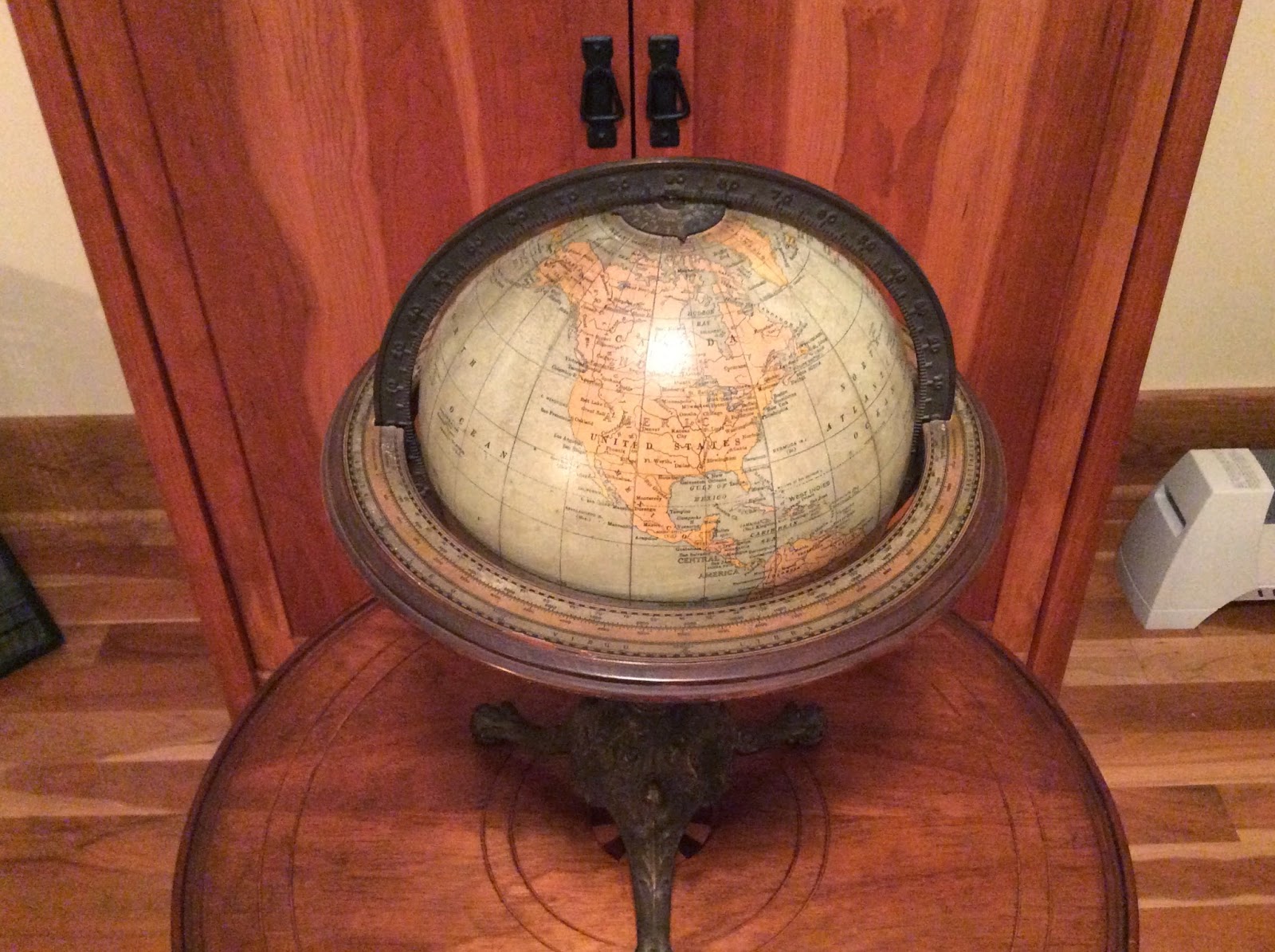 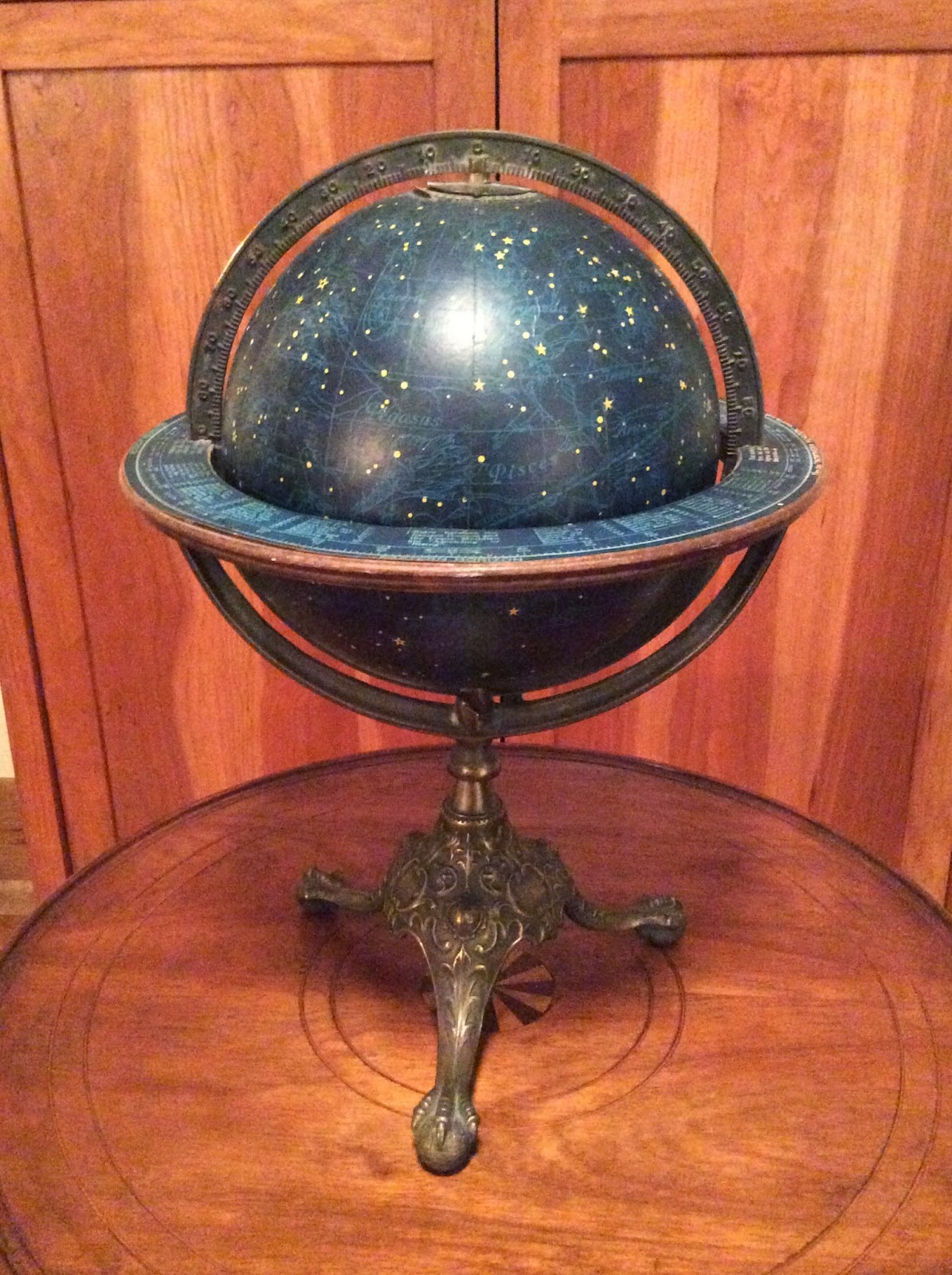 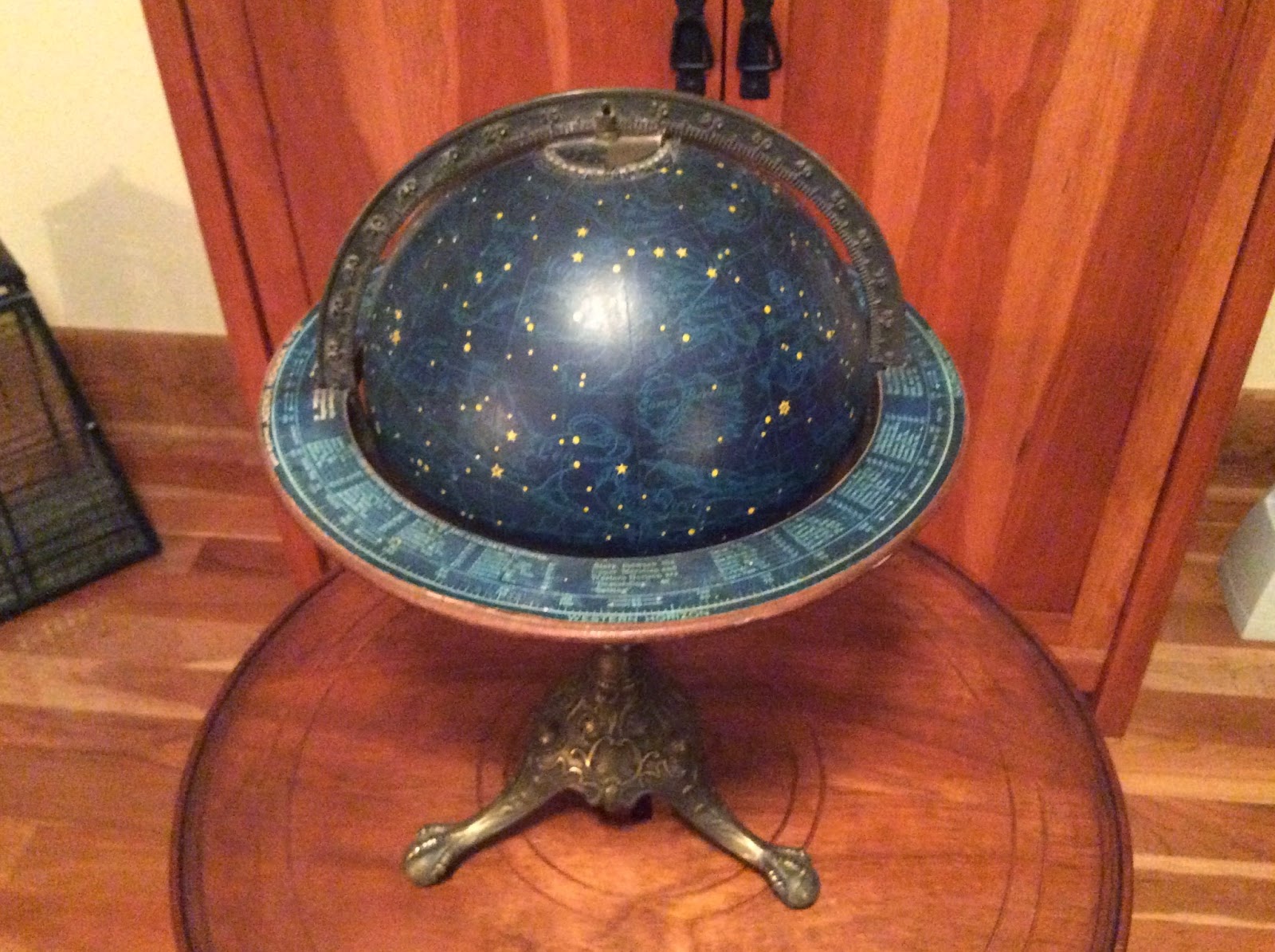 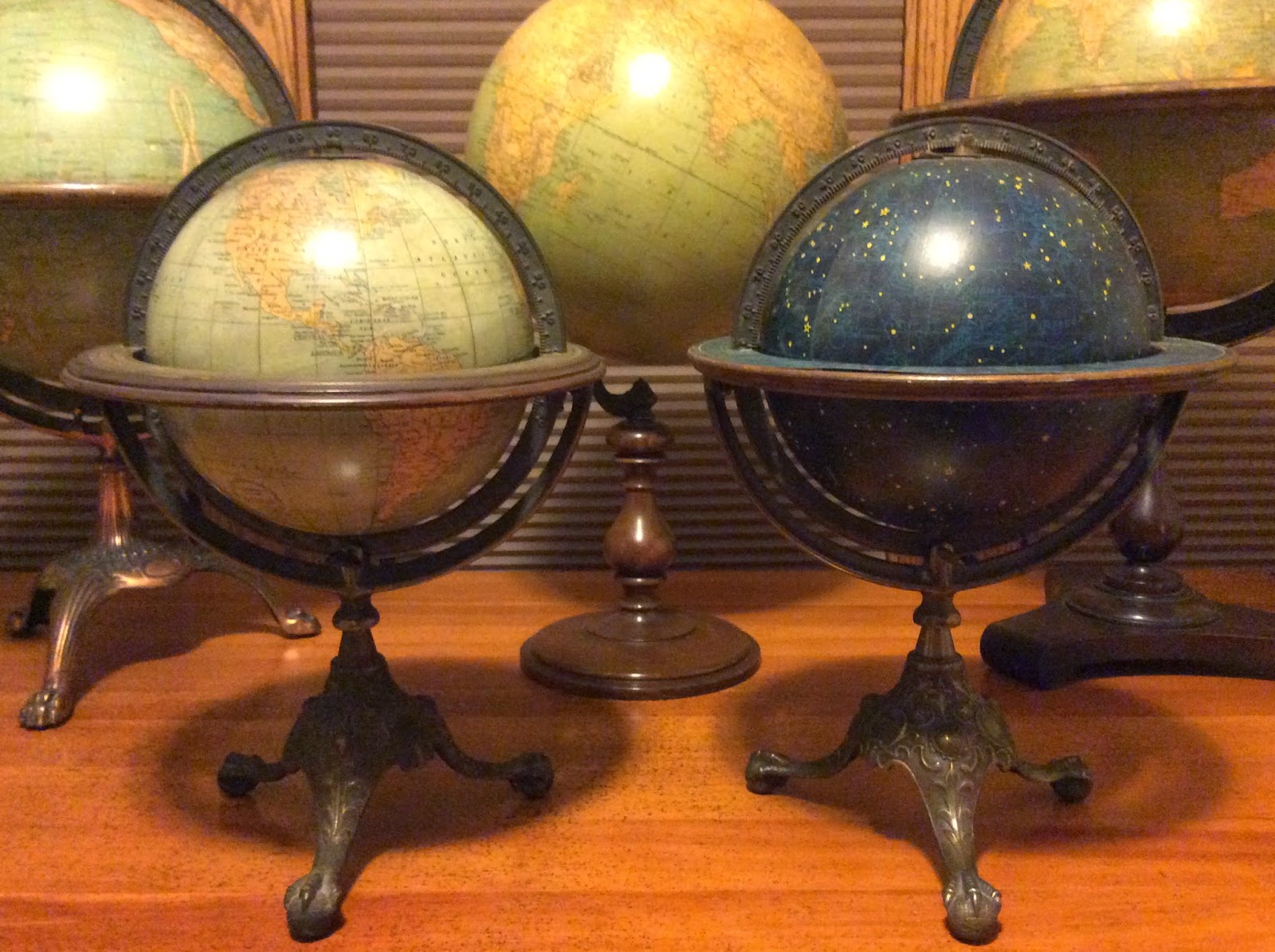 These are full mount globes, meaning they have a vertical metal meridian, and a wooden horizon ring. They are both supported on a classic Rand McNally ball and claw metal casting, this casting was used by Rand McNally for 30 or so years.  I've only ever seen this casting on Rand Mcnally's small globes.  I assume other styles would have been available, but I don't know for sure.  Each of these stand a bit under 15 inches tall.  If you look closely on the horizon rings they opposites, that is they have inverted it for the celestial globe, to accommodate a larger paper.  The terrestrial ring shows zodiac signs, and months of the year, and the celestial lists major world cities and a guide to set latitude to determine which stars would be visible in the night sky.  Scientific instruments and art objects, this is why I collect globes!


As a pair these are my favorite globes. I can't believe that there are very many pairs in existence, there's just something about a small full mount globe that I find special.

I've really enjoyed sharing them with you, I hope you enjoy them also. 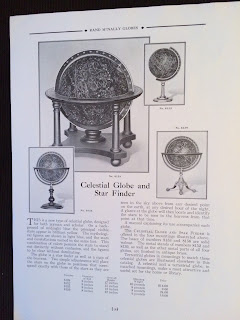 Why in the world am I updating this ancient post......I know few people will ever venture back this far in the blog to ever see this update but here it goes, Just today I recieved a catalog from the early 1930's an original Rand McNally catalog: In that catalog they advertise the 8 inch celestial globe and star finder and they show pictures and give prices of the various models, please enlarge the photos to read.  At the bottom of the ad they mention buying the matching terrestrial globe to create a pair.  How interesting a read this old catalog is . 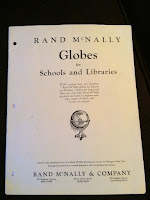