I've been waiting to write this blog entry for years, as an avid American globe collector there are a few touchstone globes that you want from the 19th century and this is one of those.   This is an AH Andrews 8 inch full mount globe from the late 1860's ,  it's on what might be described as Andrew's signature mount, the gothic tripod complete with 12 sided horizon ring.  Paper, wood, and brass in an iconic combination.

This globe is an example of the best AH Andrews was making, the ornate tripod base was quite an unexpected level of detail for what was a small desk globe.   This model was retail $15 in the late 1860's which amounts to roughly $300 in 2021 dollars,  quite a sum for such an object.   The US purchase of Alaska is complete on this orb ( 1867 ) but Yellowstone has yet to be designated a national park ( 1872). 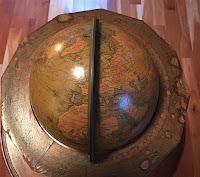 This example sits in all original condition, and in remarkable preservation.  The orb is nearly unblemished, and the tripod base is in excellent shape, the horizon band is original and shows some water stains but so often the paper is in even worse condition on other Andrews globes of the time period.   This is exactly how collectors dream to find 150 year old objects,  all original and excellent preservation.  It's my job to now preserve this item for the next generation.  These two pictures show the horizon ring and a close up of North America .   The orb has mellowed and darkened slightly over time but the Andrews map is still colorful.   I had an interesting time acquiring this globe as I was contacted by a blog reader with an interest in selling this globe.  Now usually when I'm contacted the person is far from me, in one case Hawaii ,  but this time they actually lived not so far and we were  able to  meet up and I had the luxury of seeing in person before I bought.  As anyone who's had a package damaged in shipping can attest sometimes in person is the way to go. 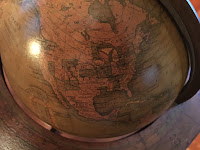 I own a similar 8 inch Andrews that is about 5-10 years newer in that Yellowstone Park is marked but little else differentiates the two orbs, save for the mounting style. 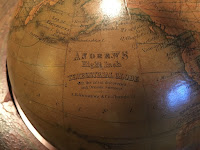