Joslin and A H Andrews globe handbooks......finally added to collection

I love the ephermal items associated with globes,  Ive written about such things many times.   As disposable as some globes were and are,  these globe handbooks and manuals are exceedingly difficult to find.   I was able recently to add two such items from the late 19th century a Joslin handbook as well as an Andrews handbook.   Originally these books would have been given out with globe purchase, commonly globes 8 inches or larger got a handbook included.


These are firstly handbooks but they are also advertisements for their respective companies globes and other products.  it's really an ingenious way of advertising considering print advertising was just about the ONLY medium available to companies in the 1880's.    Between Joslin and Andrews  these two companies controlled the lion's share of the globe market in the US,  with for home, libraries, and especially schools.   The David Rumsey collection has the full text of the Andrews handbook located here: AH Andrews globe handbook,    and the Smithsonian has the Joslin text here:  Joslin's handbook to the terrestrial and celestial globes 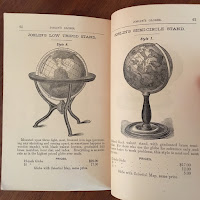 These 2 books have been on my most wanted list for quite a long time.  They seem to become available very rarely at best.   I've been trying to define exactly what I'm trying to do as a collector and a big part of what I want to do is tell a story about the companies that made these objects as well.  So that means tracking down the esoteric bits that live at the margins of the hobby and bring them front and center. After all it's history that is best represented as a complete package. 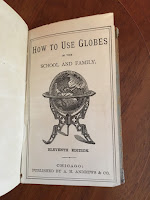 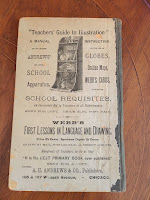