James Wilson 1828 globe part 3, The restoration process behind the scenes

Since starting this blog back in 2014,  I have talked about globe restoration on several occasions, I have even interviewed experts in the field.  It was not until recently that I myself had reason to work with a restorer on one of my own globes.
That occasion came with my acquisition of a James Wilson globe,  a globe that had been darkened by dirt, grime, and time to the point where the legibility of the map surface was impacted to the point that enjoyment of the artifact was impacted,  restoration made sense.
So how did I get started,  first step in this process I emailed Matthew Jones at Green Dragon Bindery,  I sent many bright, clear photographs.  He was able to offer a preliminary assessment of the work needed,  based on his analysis I decided to move forward, I shipped the globe off.   After receiving the globe, and examining it in person I received a clear estimate of the work required.  That work included, a removal of the old darkened varnish, cleaning and re-aligning the brass parts, re-gluing the wooden joints, stabilizing a small crack at the poles, and finally re-varnish the orb and horizon band. 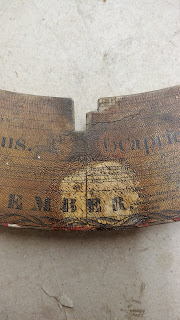 As important as what was done for this globe is what was not done.  It was decided that re coloring of the map surface, or the horizon band were not needed, also the original red paint on the edge of the horizon was left as is, finally the original finish on the stand was left these items were in fine antique shape there was no need to over restore this globe. 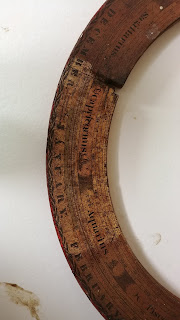 These two photos of the horizon band show the tedious process of removing 190 years of dirt and grime.  This was probably the dirtiest part of the globe as it sat horizontal and collected the most environmental contaminants.  Notice the incredible difference between the cleaned vs dirty sections.   It is important I think to mention that having the original shellac in place all these years was a wonderful thing as it protected the paper underneath allowing this cleaning to be so successful. 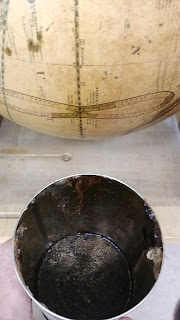 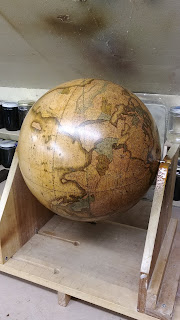 These photographs to the left show the globe stand being re-glued in order to hold this globe securely for the next 100 years.  It was fortunate that this stand was free from cracks, splits or breaks, and the original finish was intact .  A minimum of work was required to bring this stand back to tip top shape.


This next photo with the orb in a wooden jig, is showing the application of a new shellac coating. It is here for the first time that the original colors of the 1828 map are revealed as the globe maker intended.  The greens, reds, and blues were still present under that old shellac surface. 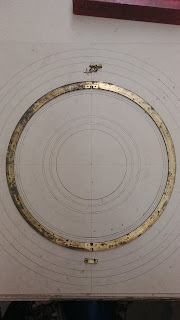 Next on the agenda were the brass fittings,  two things were done with the brass fittings, firstly they were checked and corrected to make sure they were in proper alignment, after that they were cleaned in what I will describe as a sympathetic manner.  By this I mean that they were NOT polished back to a gleaming as new shine,  instead care was taken to polish the metal parts to even out the finish as well as be careful to respect that fact that these are nearly 200 year old parts. 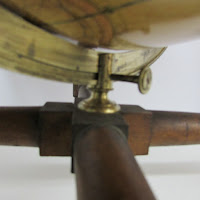 As you can see this restoration focused on the removal of dirt and grime, there were no replacement parts required, nor was there any need for the addition of map coloring .  A new varnish coating and some new glue to the joints is all that was added to this Wilson globe in order to bring it back to a condition where it can be enjoyed for the next 100 years.
Restoration of this globe went smoothly, there were no surprises along the way.  It was probably the first time this globe had been touched with the aim pf restoration in it's entire existence.   I believe I was extremely fortunate to have found this globe in such condition.   I would guess that globes of this vintage rarely come up for sale in better condition.  This final picture is the finished product, certainly the cornerstone of my collection.   Now the hunt commences for the celestial companion......

My goal with this post is to de-mystify the restoration process,  this was my first restoration project and although I had some idea as to what to expect you're never sure what to expect until you've gone through the process.  I want to thank the staff of the Green Dragon Bindery, with special thanks to Matthew Jones for his skill as well as his patience working with a neophyte restoration client.  An exceptional result !