Opportunity knocks sometimes when you least expect it.  Such is the story behind my acquisition of what will surely become the cornerstone of my globe collection.    Just this week I was able to purchase a James Wilson terrestrial globe dated 1828.   This globe is and may possibly stay the oldest globe in my collection.  Wilson, is credited with selling the first American produced globes in  1811,  this globe is  a mere 17 years after that event.
This globe represents for me the bookend of my collection,  I like to say I'm collecting American globes from Wilson to Weber, this now is truth.  Adding a globe from the father of American globe making adds a level of completeness to my collection.  A far more advanced collector than I once said no collection of American globes is complete without a James Wilson globe.

So  let's study this relic,  it is a full mount table globe 13 inches in diameter, by far James Wilson's most common globe size.
Now I know what your thinking,   that thing looks pretty crusty!  Yes it does, but underneath that badly darkened varnish lies an exceptionally well preserved globe over 190 years old.   It is actually in marvelous preservation, it even spins smoothly and freely in it's brass meridian.   The frame apart from being dry and tired retains it's original finish and the horizon band is nearly completely intact, albeit under many layers of crusty varnish. Most importantly the thumb screw that holds the globe meridian still in the meridian is present.  Often these screws went missing and that's when a lot of damage occurs with these old globes.     All things considered this globe is exactly what you want to find in a nearly 200 year old artifact.  This is a great example of a globe that has not been messed with.  There have not been previous restorations, or conservation attempts.  Also most importantly there is an absence of water damage, be it from actually getting wet, or the ravages of damp storage. Somehow this globe has escaped those fates.  A survivor in the truest sense of the word. 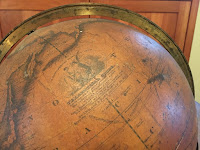 This globe shows the geography of 1828,  half of the western US is still Mexico,  another large section is simply Oregon territory.    Andrew Jackson was elected ( rather contentiously) in 1828, defeating John Quincy Adams.

James Wilson's sons had by 1828 taken over the firm their father had built and were continuing the quality globe production of their father.   In Part 2 of this post I'm going to show the remarkable  "After"  photographs that show this globe fully conserved. 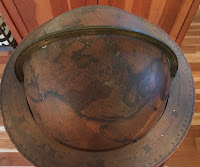 So what's to be done to this globe?  Well in a short while I will place this globe in the very capable hands of the experts at Green Dragon Bindery.  It is there that this globe will be expertly cleaned, aligned, and re-varnished, with a few minor touch ups along the way. In other words it will be properly conserved,  notice I didn't say restored.  There is a difference.  With a globe this old sometimes less is more.

This globe is certain to become a favorite because of the American ingenuity it represents in it's manufacture as well as it's place in history.


A few thoughts about James Wilson and his globe making career.  In my mind I divide James Wilson globes  into 3 time periods of globe manufacture, as follows.

2nd period :  1826 until 1833:  James Wilson steps back from day to day operations, and the responsibilities fall to his two sons,  Cyrus Lancaster , James's son in law enters the firm in 1826.


UPDATE:   JULY 9, 2019:    Heres a sneak peek at the globe mid restoration,  with thanks to Matthew at The Green Dragon Bindery