As some of you will know, I'm on eBay every day checking for items that in my mind hit that sweet spot of condition, age and rarity .  Bonus points if this item can be had at a great price!
This past Saturday I hit the trifecta.  I found a C S Hammond's celestial globe listed in the antique map section,  not the sub section of globes but in the broader map category, it was listed with a fair description and less than great pictures,  several of those pictures seemed to highlight damage to the globe, but more on that later,  heres what I found: 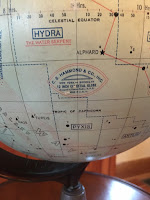 This globe came my way via a BIN style listing on eBay.  Free shipping was included in the listing price.  The price was such that even with the apparent flaws I had no qualms buying this globe.  So what is it?   This globe is a collaboration between CS Hammond of NY and Denoyer Geppert of Chicago.  The orb is from Hammond's and the base and mounting is from Geppert.    This is a 12 inch globe certainly meant for a school setting.  Unlike many other celestial globes this one is no nonsense.  It is a tool for study, it is not decorated with zodiac creatures in the background, it is simply constellations , with no adornments.  It sits in a forked meridian which allows it to be rotated easily in any direction. The base has a swivel feature that allows the meridian to spin independently of the orb.   The base is a simple hammertone painted metal; sturdy and functional, again not necessarily decorative.  It definitely  has the "look" of the late 1930's or 1940's .  A completely functional celestial globe for schools.
Now I mentioned something about an eBay adventure,   First I want to mention a few things about this globe, and how it was originally sold.  It came in 3 styles a simple offset mount, with no meridian,  this style with a moveable meridian , and finally a fully mounted version with a wooden horizon band,  This globe was also available as a 16 inch version, in all 3 mounting styles.  Now I'm unclear if Just Denoyer Geppert sold this item or if Hammond's also sold this globe. Further research will have to be done.
As It sits this globe is in exceptional preservation , just a hint of wear on the base as well as on the orb, but not much.  This is exactly as I like to add items to my collection.   That's certainly why I only seem to add one or two new things a year on average, I seem to turn down 99 out of 100 old globes that I consider.
So, on to my eBay adventure.    I saw this globe during a search, and the pictures were dim, and a bit out of focus.  They also highlighted some issues,  mainly a disfiguring piece of masking taps across the base, as well as some white residue in several spots on the globe orb.  Here are pictures from the listing.

These two pictures are representative of what I was looking at in the listing.  See the base must have had something written in masking tape and I'm still not sure what this white residue was on the orb itself.  Now normally I would pass by such a globe, but I was feeling uncharacteristically daring.  I knew a few tricks I was willing to try to remove the tape, and I thought I might also be able to remove the white stuff also.    So I bought the thing, and FedEx dropped it off at 8:30 this morning.   Right out of the box I figured I better tackle the tape, or else I'd just re-list the thing.   This type of hammered finish paint was common in the 1930's and 40's and I had encountered it before on other collectibles.  The key to removing the adhesive and not the paint was a 12 and 1/2 mix of canola oil and baking soda .  I made a paste and applied,  waited 30 minutes, and repeated.  It took about 4 applications but sure enough the base came out looking almost new. 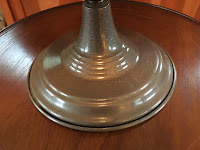 This picture shows the base, all cleaned up, and also in a much better light than the eBay pictures,  I tell ya.... If I had a buck for every eBay auction I've seen with lousy pictures......   In this day and age how hard is it to take a decent picture?
OK, I digress,  back to the topic at hand,  the white stuff, was on 4-5 different places on the orb, and I was very fortunate that a product called Absorene which is a rubber like putty was able to lift every last spot and bring the orb back to life.   All in all I spent about 2 hours working on this globe and the final results are wonderful.
This now becomes one of the newest globes in my collection,  but I've always been drawn to this model of celestial globe.  For one thing it was sold at a time when most globe manufactures in the USA had ceased production of celestial globes, Rand Mcnally still made them, and theirs were still decorative objects.  This model seems destined for many an astronomy classroom to be studied and worked with as a tool ,  science first, art ..... well not even thought of.    That's kinda what Denoyer Gepppert globes are all about, a no nonsense approach ,   a focus on the education market.   Very little attempt to sell to households.   The Americanized celestial globe if you will.


One final thing,  on the underside of the base some writing was found that explained a lot about this globe.   One word said simply " GS Library"   so this globe lived in some sort of library probably a school library not a public library. Also written were the words. " Discarded 4-85". I believe that this meant that the aforementioned library sold or gave this globe away in April 1985.  So this globe served it's purpose for nearly 40 years before being moved along.   That probably explains why it has remained in such nice shape, it was institutionally owned, then some employee probably took it home and it sat there for the next 30 years until their estate sale.........then through the antiques chain to me.