If your a regular reader of this blog you'll know that I'm always on the lookout for globe related items. Things like original handbooks, catalogs, and manuals being one of my favorites.   A couple of weeks ago I was able to add two exceptional pieces to my library.   Lets take a look and see what turned up.

1. First up Rand Mcnally globe manual and catalog of 1902: 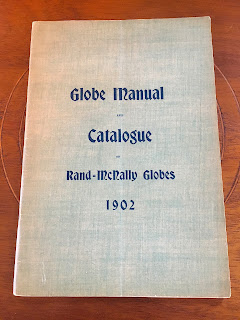 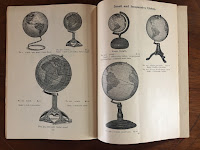 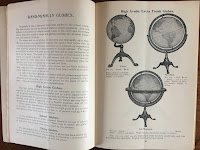 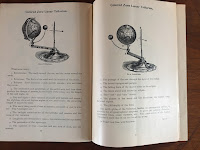 Now I thumb through this catalog and It occurs to me Rand McNally globes from the turn of the 20th century are not necessarily rare, but they are becoming uncommon. How uncommon is a 116 year old catalog from the company?  As I read through this catalog It was surprising to see the depth and breadth of globes offered.  It also made clear that some of the least expensive globes that they made survive today in the greatest numbers.  They actually offered a category of "cheap globes"  could you imagine a manufacturer today referring to part of their product line as cheap?
Something else I discovered reading this catalog is that by 1902 the 3 inch globe was being offered only with a wooden base, they had discontinued the lotus leaf base and the well known glass magnifier base, thus those globes with those bases all pre date 1902.   This is just one of the tid bits in the catalog. A fascinating look at the marketing of globes from over a hundred years ago. 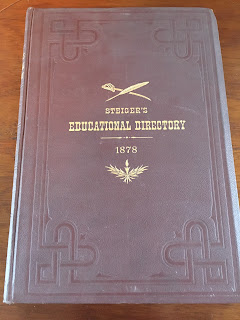 Next up I'm going even older,  The Schedler company of New Jersey and NY started producing globes in the 1860's and they continued until about the turn of the 20th century.  Yours truly does not own a Schedler globe..........yet......Not for lack of opportunity, I've had several chances but the pieces have not lined up quite right, usually a combination of price, or condition or timing has prevented me.     Anyhow if I can't have a Schedler globe just yet the catalog will have to do.  Now this is not necessarily a catalog in the traditional sense. 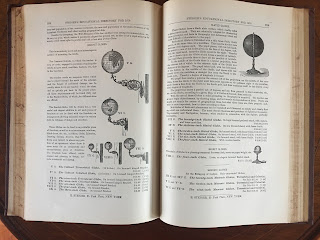 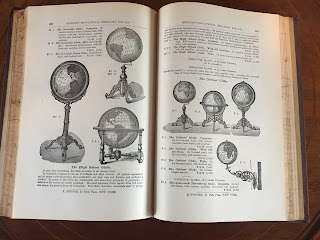 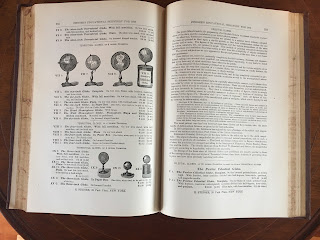 The book I'm going to share with you today is titled "  Steiger's Educational Directory 1878"  Well what a title, I'll boil it down, it's essentially a directory of schools located in the United States, Germany, Austria, and " British Dominions" .  This information takes up  100 pages,  the next 215 pages are a catalog of the E. Steiger company's offerings for sale.  Inside this portion of the book, a full 18 pages are devoted to the globes, and related planetaria of the Schedler company.  It is these 18 pages that I was after when I bought this book.


Here are just a few samples from this odd ball of a book.  It's interesting that in the preface the E. Steiger company mentions that this will be an annual publication but it must have been unsuccessful because the 1878 edition is the first and last known to have been printed.  It's really beautifully bound with an embossed cover, and guilt lettering.  It's also a large book almost 8x11 inches.  E. Steiger was a German immigrant who owned a school supply business, and publishing company, and Schedler was also a German immigrant who owned a globe making business.  I've never seen Schedler globes offered from a source not connected to the E. Steiger company quite an interesting and I'm sure typical arrangement for the time.

I'm always struck by the ornate design that Schedler  offered with the mounting of their globes.  Their globe mountings were incredible works of art in and of themselves.  A proper Schedler globe is certainly high on my list as far as collecting goes.

I share a lot of globe related printed material on this blog.  It's not everyone's cup of tea, I get that. I just love the history of these objects. How were they marketed, to whom, for how much?  I'm a researcher at heart.  I spend hours researching globes and related items, usually that involves the use of a computer.  It's nice when a primary source is available.


Happy hunting........because true collectors know it's all in the hunt!!