I can't think of a more unsettled time in American history than 1860. America is on the verge of civil war, and in November 1860 we elect arguably the greatest man to ever hold the office of President of the United States, Abraham Lincoln.  There are 33 states in our fragile union in 1860, some slave owning some free.  An active and many said inevitable Secession crisis grips our land. This small globe was issued in Boston by Gilman Joslin on the verge of a chaos this nation had never seen,  if that's not holding history in your hand then I don't know what is!   Lets take a look:

This globe is a great example of the work being done by the Gilman Joslin firm in the mid 1800's.  Classic Joslin, turned wood base, tan oceans, brass meridian.   The geography is simplified, countries are denoted in separate colors but no state boundaries exist, major cities of the time are labeled. Much of Africa is empty and labeled as unexplored.  Alaska is " Russian America" that won't change for a few more years.  This globe is issued just before the American civil war.  There would be a period of time where resources were diverted and globe production stagnated just after this globe was issued. Follow this link to another example of this globe from the David Rumsey collection  This example has a more ornate stand suggestive of a collaboration with Merrium & Moore.

The 1855-1868 period is an interesting time in the history of American globe making. Wilson, and Cyrus Lancaster are gone, Merrium & Moore and Joslin are the two globe powerhouses, (they probably share engraving/ gore production) With this in some ways being Joslin's most dominant time.  Almost all globes made in the USA during this time period that surface today are from either of these two firms, Holbrook and Charles Copley are distant number 3, and 4.   It would not be until 1868 that Schedler, and shortly Andrews come on the scene and start to take the globe market from Joslin and Moore. 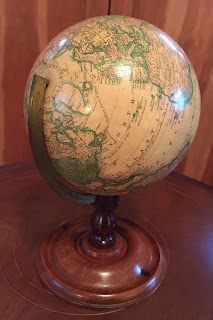 This globe has an interesting feature that I'll address right away. It's mounted at what appears to be an odd angle....  Most globes we are used to looking at are mounted straight on, or tilted 23.5 degrees.  This one seems to break those rules. It's tilted to about 45 degrees.  Now when I first saw a globe mounted like that I'll be honest I figured it was a one off custom alteration. Then as time passed and I studied more I started seeing smaller globes of a certain time period, both English and American were often mounted in this fashion.  It was weird at first but in one way it is quite logical.  On a small globe like this it's much easier to see the geography if the orb is presented in such a manner.  Think about it for a second. this globe has a stationary meridian, so it only makes sense to tilt the globe so that it can all be observed on a desk or in a classroom without having to resort to turning the whole apparatus upside down.  At least now the globe can remain upright and sturdy but the student can still see south America and Australia.  Logical once you think about it. 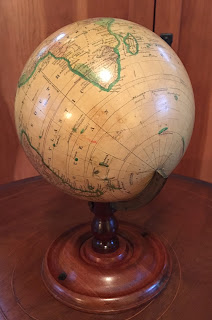 Notice too that in the base long ago someone drilled two holes, I'm sure that was an enterprising parent securing this little globe to a desk so as not to have junior knock it over and shatter it, remember in 1860 even this small globe was a rather expensive item to purchase.  Does that detract from the globe.....?   Some will say yes, many including myself will say no.  My reasoning is simple.  Those battle scars put this small globe in context, it was utilitarian, it was in the hands of a child, and it was expensive. Why not try and protect it from breakage? It speaks to the authenticity of the piece, brings it to life in my opinion. Besides the star of this show is the well preserved mapping. The orb itself sits in such amazing preservation, colors are still even, crisp, and well defined, the orb stands out as an exceptional example.  I should note the way I did these pictures is a bit deceiving. This globe is rather small standing just 9.5 inches tall and with a 6 inch orb it is a diminutive package!
If you collect American globes there are a few touchstone dates that are important to you.  One of those big dates is 1867, that is the year Alaska was purchased from Russia.  Globes from 1868 onwards show Alaska as part of the United States, those before show a huge Russian territory called Russian America.  Globe collectors often use these big map change periods to discern value to a point.  For example a globe from 1860 is much more desirable because of the changed political geography than one from 1868 showing a map that more closely resembles the present day.   Much like the 1889 pre and post Dakota split is also used to assign value, and guarantee age so to speak.   It's always amazing how quite recently our world was very different, Russian Alaska, nearly non existent antarctic, Europe dominated by empires, an empty Africa waiting to be explored!  These were all changes in the 19th century,  astounding if you step back for a second......


I am firstly a lover of history, as Americans ours is a short and tumultuous one, we've had growing pains as a country. When I hold a globe such as this one made in Boston, and dated 1860. I can't help but think about what was America like back then?  When as a nation we were barely 90 years old.  When this globe was made there were still people alive who were born in Boston as British subjects, they became Americans through revolution.........if that's not history in your hand.........