In 1930 Rand McNally launched a line of globes that were a departure from anything they had offered before.  The celestial globe and star finder is a unique globe both for it's aesthetics as well as it's positioning and timing in the marketplace.  I have posted about this particular globe before but now I want to go in depth, the definitive post if you will. So here's the globe we're talking about:

The celestial globe and star finder, was offered in one size only that being as an 8 inch globe, but it could be ordered in 4 different mounting styles, this next picture shows the original Rand McNally catalog page with the ad for the celestial globe.  This globe was sold in the early 1930's for between $9.60 and $24.00 .  These were expensive pieces to own especially considering the depths of the depression.  Suffice it to say that Rand McNally didn't sell these globes in huge numbers like their terrestrial counterparts. Thus they are so much harder to find now.  I purchased my example in 2011 via eBay and it was an expensive endeavor.  The example at the top of this post is mine and is nearly as good as you're likely to find this globe. I'd be hard pressed to uncover a better example and in 6 years have not seen a nicer one enter the marketplace.
When Rand McNally made this globe they did so in conjunction with their chief cartographer William E. Johnston, who published the manual " Astronomy made Easy" a copy of which accompanied each of these globes when sold.
I was lucky enough to find a copy of the original manual and add it to my globe to complete the set, the manual in this case is quite invaluable because it gives some basic instructions on how to actually use this celestial globe. 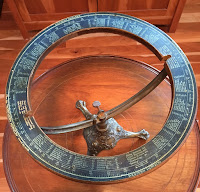 In this case with the aid of the horizon band, which lists coordinates for all of the major cities in North America you can position the celestial sphere on the right axis to give you a miniaturized view of the heavens above you, quite ingenious! 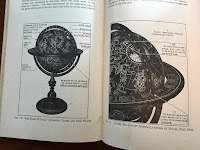 The decade of the 1930's is a fortunate time in globe making in that it is at the tail end of generally quality manufacture.  It would not be long, until cost cutting, and price pressure descended on the globe industry in the form of lesser quality materials and workmanship.
This globe still retains the use of fine materials, wood, metal, and plaster.  Adding in quality lithography and you've got a natural classic.  As the advertisement shows this globe was available in several styles, as this engraving from the handbook shows a walnut base was also offered.  I have a picture (with thanks to another collector)  of this globe in it's walnut turned base.  I think I actually like the walnut base a bit better...?  Hard to say both are exceptional.
The very dark blue background of this globe is not a Rand McNally first, but you've got to admit it adds immeasurably to the sculptural beauty of this globe. Stunning in person! It should be noted that George Phillips of London manufactured a similar globe in the very first part of the 20th century about 25 years earlier. Weber Costello was also importing via Johnston in Edinburgh a similarly dark blue sphere also 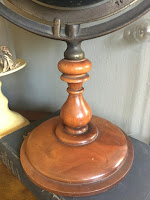 In the 1940's and even into the early 60's Rand McNally produced other celestial globes that, when examined were all descended from this original celestial mapping. These later globes often featured machine chrome mid century influenced bases, not to my liking but certainly appealing to many other collectors. 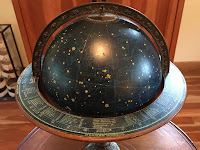 So no in depth analysis would be complete without a peek into the creation of this globe, I have already included the original patent application filed by William E. Johnson, but who was this person, and what role did he play in this globe and others.  Mr Johnson was Chief of the cartographic department of Rand McNally. He toiled largely in obscurity but his fingerprints are all over so many things Rand McNally did in the 1920's and 30's.  He worked for the company for over 30 years. In 1931 this globe and it's accompanying booklet were reviewed in a trade publication here is that excerpt:  Astronomy Made easy, with accompanying globe  Mr Johnson like so many people behind great companies are oftentimes relegated to footnote status, I tried to find more about this man his output for Rand McNally was immense, credited with multiple patents, and listed as author in countless copyright entries.  Was Mr Johnson the Jonny Ive of Rand McNally.....??  Perhaps that is not such a bad comparison.  Certainly Mr Johnson deserves his moment of recondition.
So lets get to brass tacks. Adding this globe to your collection will take patience and money.  I would expect today to spend around $1000 to own this globe in fine condition, add 10% if it had the original manual. All but one of the 4 models sold included the horizon band with cities and latitudes listed, the offset 1/2 meridian model lacking this feature in my mind is the least desirable both for it's aesthetic appearance and functionality. I would deduct 20% from baseline if considering the purchase of the 1/2 meridian model for this reason.
Finding one is another matter, they do come around but they are infrequent.  The good news is generally the ones I've seen are in states of good preservation.  I believe we owe this to the fact that during the depression wealthy people could still afford these, and unlike terrestrial globes these did not out date after WW2.  Many of these celestial globes were set up high on shelves to be admired and therefore were not damaged.  I must also mention one thing about this globe.  Available only in one size that being an 8 inch model, it is perfectly sized to fit on a bookshelf, standing in at 14" tall, adding to it's desirability for sure.
This globe was sold as a stand alone celestial sphere, a break with the traditions of the past.  It was always the case in the 18th and 1st half of the 19th century to sell a pair of globes one Terrestrial, and one celestial.  With the demands of the public school market came a break from this tradition and single globes were sold leading to the relative obscurity of the celestial globe especially in America from the 1850's onward.  Rand McNally did offer an 8 inch terrestrial mate for this celestial, I own my example as part of a pair I've posted about them a while ago.
I hope you've enjoyed my analysis, I want to inspire collectors please drop me a line to chat or share your globe story, I'd love to hear. Of course if you've got an exceptional globe to sell especially a celestial globe like this one.....then please contact me!        Happy hunting....... 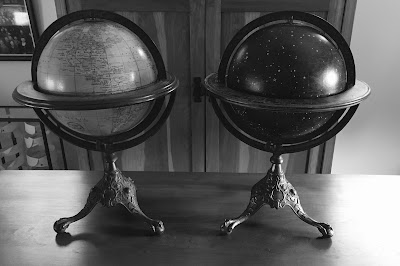