A few months back I lost out on a near perfect example of the Denoyer Geppert 4 inch globe.  Back then I lamented that I lost an auction for a measly 4 cents!
Well serendipitously I managed to procure an even better example of this great globe, complete with the original box and original reorder insert. 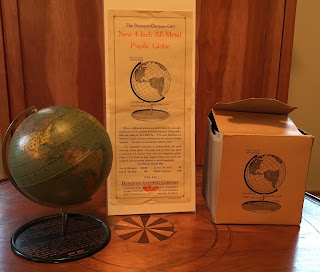 Here's a great little item that I think enjoys a place in any globe collection.  This is Denoyer Geppert's entry into the lucrative student market, a la 1928 or so.  A 4 inch tin globe mounted on an adjustable 1/2 meridian. The whole thing stands less than 6 inches high, the base has written tips and ideas for use written in orange.  The idea behind this was that for 50 cents each every student in class would be provided with their own globe and would follow along at their desk with the teacher who would be operating from a larger, presumably 12 or 18 inch Denoyer model of her own.

This globe is advertised as superior to pasteboard, or cardboard models such as those offered by Rand McNally, and Weber Costello, because being ALL METAL it can stand up to the rigor of the classroom better.  I've never handled this model globe before but I was struck by how heavy it was, the metal is far thicker than the tin globes J Chien manufactured at the same time, this would not dent nearly as easily as on of those.
This little globe is probably new old stock, it was probably in the estate of an educator who never got around to using this one. It's in as good a shape as anything made of metal that is 90 years old. There is no rust, next to no scuffs, and absolutely zero dents. Add in the box and the advert and it's a nice item to own.  I paid $215 plus shipping, certainly near the top of the market but I did not mind because for me the excellent condition warranted it.
Some of you are going to look at this item and say, ......are you nuts, it's a toy...!!  Well no.....no it's not , at least Denoyer Geppert didn't market it that way in the 1920's.  At left is the original insert, on the other side are the assembly instructions for this globe.
Denoyer Geppert is a sometimes overlooked player on the globe landscape, headquartered in Chicago, like most late 19th to 20th century globe makers they don't get the attention they deserve.  A fellow blogger Andrew Clayman has written what I would consider The most in depth article about Denoyer Geppert that I have ever run across. I urge you to follow the link and check it out.  As always thank you and please don't hesitate to comment below.
Posted by Kyle at 4:56 PM