A look back at 2016, a banner year for this collector!

I started this blog in the spring of 2014 and now 2 1/2 years in and almost 100 posts later I think it's time to take a breath and look back on this past year from a globe collector standpoint.
This has been a banner year as a collector I have made some wonderful additions and some careful subtractions all in all 7 new globes entered my collection and three globes have exited. Rarely do so many globes enter, and rarely do so many globes exit. A lot of changes for someone who considers finding two globes in any given year good.  I'm going to walk through these changes in the hopes that I learn along the way. 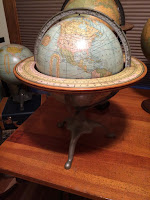 The year started out on a high note with the acquisition of an exceptional example of Rand McNally's work  through a NY auction, labeled AP Mott Syracuse it was in reality an 1891 McNally globe with a school supply house over label.   This globe posed an interesting problem I was fortunate enough to already own a very nice early Rand McNally so a decision had to be made, do I sell or keep two essentially similar globes....?  Well the realities of space limitations won out and I sold on my other copy of this globe.  Very recently I have discovered that American Globe and School supply ( Seneca Falls) most likely made the stand and horizon ring for this beauty.  The horizon ring is exceptional on this model, a great way to start 2016! 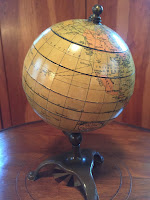 All was not quiet for long as March rolled around the eBay gods worked their magic and a very nice Geographic educator globe came my way after some spirited bidding, this was a globe that had been a near miss for me for a number of years so it was nice to finally add this petite treasure to my collection.   I am missing the " Columbia" puzzle piece to this globe if you have an extra or have a second educator for parts, drop me a line.

May would bring with it a rare event for this globe hunter, the chance to score a treasure in my own back yard. A local auction house near Rochester NY had this exceptional globe from the Star Eraser company of Seneca Falls NY in it's upcoming auction.  It is rare that I get the chance to actually see and handle a globe before I buy it but this one was an easy 45 minutes from my house so on preview day I was off to examine this item.  I bid remotely via telephone and did get into a bit of a back and forth with another bidder but I was determined, and in the end quite glad that I was able to own this globe.  This globes provenance included having been part of the collection at Rochester's Strong Museum, a world renowned children's museum! 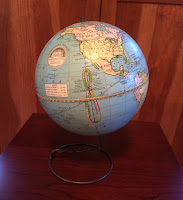 The next addition to my collection in June 2016 was certainly my favorite. I received as a gift a splendid peerless 6 inch school globe.  This one looked to be unused, it's colors vibrant, and it's metal untarnished. Just a magnificent item. Made remarkably more so by the fact that it was from the 1920's  quite a survivor! These were sold by the thousands for schools to hand out in geography class. I liken it to the cheap plastic recorder I received in music class. Destined to be abused and disrespected this ephemeral globe was not meant to survive. 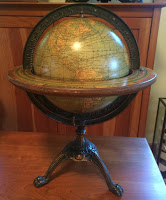 August brought with it another eBay find and a mystery as well.  Again after spirited bidding I was the owner of this very nice 8 inch full mount Weber Costello globe.  A very nice globe in it's own right if it were only that, but wait there's more!  The story did not end there because this globe holds a mystery.  This globe has the most curious over label I've ever encountered. It is over labeled for the   (A. H. Andrews company)  Of course Andrews sold their globe making to Weber in the mid 1890's but this was not the demise of the Andrews firm.  From the ashes of Bankruptcy rose a reorganized Andrews, it was this company in the late 1920's that was back at the school furniture game, and along with school furniture globes are not far behind.
My research surmises that much like any other school supply house of the time Weber Costello was all to happy to sell an over labeled product to Andrews and thus a "new" Andrews globe was created.   This is the only one of these such globes I've seen come up, I'm sure more are out there to be found. 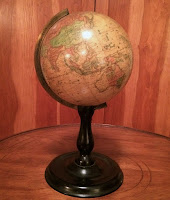 September brought with it quite a nice find in the wilds of New Hampshire, an estate find Gilman Joslin 6 inch globe dating to the late 1880's a remarkable globe for it's overall condition as well as the great story associated with it's arrival in my collection.   This was Joslin's attempt to make an inexpensive globe for public school use, and indeed they found success with this model.  The orb is quite detailed for 6 inches, and the mounting being a less expensive painted wood instead of stained as was Joslin's traditional base. 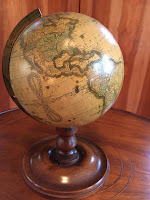 If I had found only 1/2 of the great globes that I did this past year I would have chalked 2016 up as a successful collecting year, but it was a banner year instead as autumn drew to a close one more item was to make it's way into my humble collection.  Probably the most significant find for me of 2016 was a serendipitous accident.  Gilman Joslin's 1846 globe is by a substantial margin my oldest globe. I wrote extensively about this globe recently so I wont belabor the point.  Now this is an 1846 edition, I have just recently found out about a dated 1844 edition that would be significant because of the treatment of Texas on that slightly earlier edition. More research will have to be done.


OK so that's the hit parade, certainly if every year were as fruitful on the hunt as 2016 then I'd be writing you from a more cramped house, with an angrier spouse!   These 7 globes as a group represent quite a nice collection on their own.  Along with these gems I was also able to find a dizzying amount of globe related catalogs, manuals, and texts. These too are very important ( well at least to me)
I had a few near misses, and a couple of outright regrets on the collecting front this year that I think are in some ways more important than the scores made.  Most notably earlier this year an exceptionally rare James Wilson 1811 globe trotted itself onto eBay and I was too blind to see it's potential. It was in a substantially shabby condition, but all the critical pieces were present for a successful restoration.  It is this second part that I missed, I did not see the potential in this globe.  Someone smarter than I did see, and I'm sure they have an incredible treasure to show for their knowledge.
Another missed opportunity came also on eBay ( notice a pattern here) when a rare  5 inch Schedler hinged globe came up for bid.  This particular gem was in remarkable preservation and I missed out to a much more experienced buyer.  At least I was in the hunt on this one bidding strong, but not strong enough. I was not even smart enough to bid on the Wilson globe mentioned above. I watched that one for days only to let it slip by without even a chase........

I am by nature quite a conservative buyer, rarely do I like to go out on a limb when buying and this sometimes causes me to miss things that I might otherwise like to own.
Often there is  the matter of cost of acquisition that is not talked about all that much on this blog. I believe that many readers who stumble onto these pages dismiss globe collecting because they think acquiring great globes is far more expensive than it is. ( I refer all of you to my time vs money post)   I will say that the 7 globes I highlighted in this post cost a combined $3,650 to purchase, that is total cost, plus buyers premiums, plus all shipping charges and taxes included.  A substantial sum to many, a drop in the bucket to others. In the context of these globes however I think this was a quite reasonable price to have paid for these great globes. Buying these at a completely retail setting might have cost double that amount or even more. Am I justifying my spending a bit? Maybe but that works out to $70 a week or just over $300 a month.  We all know people who spend $300 or more on vices, or entertainment monthly. Globes to me are both!  Granted most years I spend closer to 1/2 this sum so this hobby is still far less expensive than collecting art, or many other categories of antiques.  Of course as ant collector will tell you past the dollar sum of collecting it's the hunt for these treasures that is the most thrilling part.....!

**** If you like what you've read, go to the top of the page and submit your email address to follow this blog via email****