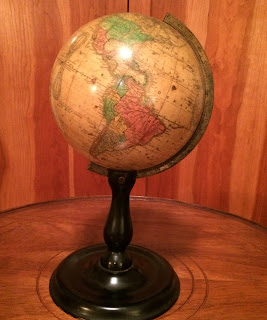 I want to show you a great little globe that has made it's way into my humble collection.  A Joslin's 6 inch school globe.  This gem of a globe has been on my most wanted list for quite awhile and finally my treasure hunt is over.  Six inch globes are the smallest size that Joslin made; as with many American globes of this size this model was most likely destined for a student's hands. Purchased either by a school district for classroom use, or by fortunate parents for home study. This globe would have retailed for about $5.00 in 1885.  The orb is 6 inches in diameter and it is mounted with a graduated 1/2 meridian. The stand is of an ebonized wood, and the whole thing tops out at just under a foot tall. 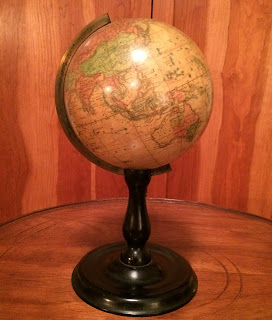 This acquisition continues my trend of buying small, becoming a necessity as space is coming at a premium these days.  But I must say for a small package you could scarcely find a more elegant presentation.   This example is nicely preserved, a bit dirty especially in the northern hemisphere, and with a bit of wear to the base all in all a nice presentation. In fact this globe shows the correct and expected wear that suggests that nobody has tried their hand at armature cleaning or restoration, and that's a great thing!!

This globe presents a simplified map surface that makes dating this globe particularly difficult, Congo Free State is delineated in Africa, although not named, no state boarders are shown in America so my best guess is that this globe came into existence after 1885, but probably before 1895. Here is a great link to another example of this globe at the : Boston Public Library  They seem to think it's 1870's I think that's a bit optimistic. Six inch globes that early probably would have had a stained wood base not an ebonized one. 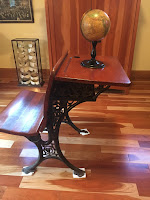 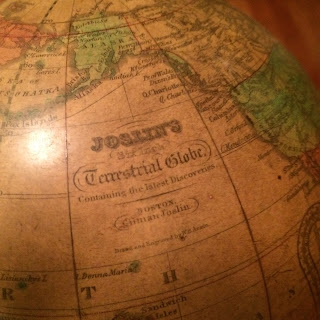 This globe comes "farm fresh" right out of a New Hampshire estate.   It goes to show that these old globes are still able to be found with their original owners and not always in the antique dealer stream, although this is quite an early example to be found this way. Seeing as this globe had to pass through at least 3 generations before being scooped up by yours truly.  This globe owes it's place in my collection to the efforts of one of my best friends, and fellow globe enthusiasts, she knows who she is........Thanks again!!  Here's a handy estate sale tip, if the closet is full of Depends, don't buy anything upholstered......stick to the case goods.
You know Joslin was one of those east coast firms that fizzled out after the turn of the century. Beaten by the Chicago upstarts and their fresher take on the manufacturing/ marketing process As well as  stiff price competition, Schedler was another victim of the juggernaut that was the Chicago based firms.  Below I have assembled a shot of this Joslin globe and a Rand McNally school globe also from the same time period.  The Joslin globe was about five dollars, and the Rand McNally was about 1/2 that price.  If you are a school district, or for that matter a parent it's hard to justify paying double for the Joslin when the Rand McNally was perfectly serviceable.     You know there is quite a story to be told about the American globe makers move from the east coast to Chicago, a microcosm of manufacturing trends in the late 18th century, fodder for another blog post for sure..........


As always, lets discuss things, and please if you have a small globe especially a Joslin, or Andrews, or Schedler just gathering dust in uncle Ebenezer's attic well what are you waiting for, he's not going to miss it!!   sell it to me!!!!
Posted by Kyle at 10:51 PM