Seneca Falls NY, it's place in the History of American globes

Seneca Falls NY is a lovely community nestled in the finger lakes region of central NY.   As a small town it is big in history, the woman's rights movement is said to have begun here.  Many people also believe that the town of Bedford Falls in the movie " It's a Wonderful Life" is modeled after Seneca Falls.  Anyhow it is a lovely town with a lot going for it.   Situated almost equally east of Rochester and west of Syracuse near Cayuga lake.
Would you believe that starting in the early 1880's this town gave rise to three separate but intertwined globe manufacturing concerns....?  It is true Lets dive in and learn what role Seneca Falls plays in the history of the American globe.
First let's start with the most obscure globe connection. Flavius Cheney was an inventor and later globe maker who resided in Seneca Falls in the 1880's. In 1882 he applied for and received a patent for mounting globes(2), here is a picture of his patent drawing. 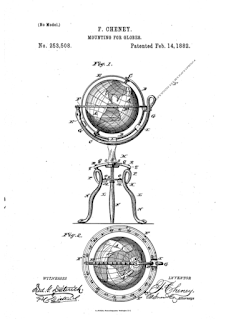 So as early as 1882 Mr Cheney was concerning himself with the manufacture, and mounting of globes.  He also authored and published a " Globe manual for schools" in the mid 1880's  It is unclear if he was working for another Seneca Falls company the "American Globe and School Supply company" but they did acquire from him the right to print his globe manual in the late 1880's. In the 1890's this manuals printing is taken over by the Syracuse NY firm C. W. Bardeen(3)( More on them later) Below is a picture of the Globe manual courtesy of Princeton Antiques & Books

I believe that he was working for American Globe and School Supply as he applied for a second patent in 1886 for an improved eraser, that patent was granted to American globe with credit to him as inventor. Here is a link to his second patent:
F. Cheney patent (2)
Mr Cheney must have seen the success that globes were for his employer so he struck out on his own with the "Cheney globe company"  but he did not do so in Seneca Falls NY instead moving his company to Mystic CN.  The only known example of one of his globes is housed in the David Rumsey collection, here is the link to his globe: Flavius Cheney globe  I find it interesting that Mr Cheney did not get around to making this globe until 1896, quite a long time after his globe patent, and other work in Seneca Falls.  I encourage you to click the link there you will find a zoom able image of Cheney's work note how rudimentary, almost basic his map is. He was clearly making his own gores, certainly not college level material here.....
By far the largest globe making concern in Seneca Falls was the American Globe and School supply company ( AGSS for short) .  We know from the historical documents that they were in business at least as early as 1884 and they quite possibly could have been earlier(4). The company was founded by Walter Allen and was advertising globes for sale also as early as 1884. This is interesting because this pre dates globe manufacture from Rand McNally, according to Werner, they were using W.&AK Johnston for their earliest globes.  After 1891 they seemed to switch exclusively to Rand McNally but unlike many other school supply houses they did in fact assemble their own globes.   AGSS in the 1890's operated a 600 gallon nickel plating plant in Seneca falls(7); many of their surviving globes are on nickel plated tripod stands, as exampled here 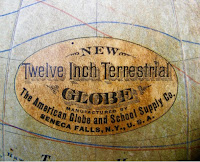 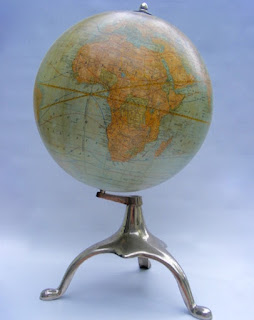 This example at left(5) is typical of AGSS's output a 12 inch Rand McNally sphere, mounted on a simple nickel base. Notice that their cartouche is the exact size and shape as a standard Rand McNally cartouche from the period. This was a common arrangement in fact Rand McNally provided globe gores to many smaller companies in the 1890's.  American globe and School Supply must have had a deeper relationship with them than most because they seemed to have had the ability to reproduce the whole line under their label. I want to show another globe from AGSS that was previously known only as a Rand McNally design:  Below is a 3 inch paperweight globe clearly manufactured by Rand McNally but here the gore themselves are with the AGSS cartouche, there is no over label, still dating from the early 1890's(6)


This Cartouche at left is showing a globe manufactured by AGSS and then over labeled by Thomas Kane &Company(6). This company was a school supply house from Racine WI, they were active from 1894 until 1899. So this map was Rand McNally, assembled into a globe by AGSS, then re labeled and sold via Thomas Kane...........confused yet.......
American Globe and school supply operated from 20-22 Boston street In Seneca Falls and employed about 18 people at their apex(7). Walter Allen their president died from pneumonia in 1897, and in 1900 his company was sold to C. F. Weber  ( later Weber Costello )(3) Isn't it interesting that after that long relationship with Rand McNally, they up and sell to a direct competitor? Then again C.F. Weber was a school supply house, Rand Mcnally never was.
It's interesting to see the divisions of manufacture in the globe world of the late 19th century.  Some companies engraved globe gores, some companies made everything except the map. Still some companies probably made nothing except the label that they pasted over the actual manufacturer label.
Last but certainly not least I want to explore the Star Eraser company, this company was founded by two brothers Frank and William Hammer, they were active at least as early as June 1888 and curiously they were headquartered at 5 Boston Ave Seneca Falls NY( sound familiar) .  They produced globes, and an improved eraser for which Frank Hammer was awarded a patent in May 1889.  The Hammer brothers employed 6 to 9 others in their endeavour and were active until their acquisition by the larger Syracuse NY firm C. W. Bardeen in 1905.  They might have gone along as a stand alone firm had their founder ( Frank)  not died at the young age of 42 in August 1903.  Now their cross town competitor was sourcing globe gores from Chicago via Rand McNally. Star Eraser went further afield for their maps contracting with the venerable firm of W&AK Johnson in Edinburgh. Later in their manufacture sometime in the 1890's Star Eraser switches to Central School Supply from Chicago for some or all of their globe gores(1). 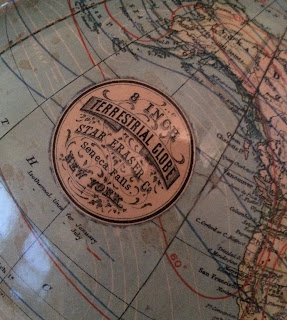 Star Eraser's cartouche is pasted right over the Johnson label on this globe and was offered with a nickel plated tripod stand. Now where are you going to get a nickel plated tripod stand for your globe.....?  Oh yeah that's right American Globe and School supply owns it's own nickel plating factory, right down the street how convenient........
Now  Star Eraser was a small firm who's main product was a blackboard eraser.  AGSS also sold erasers, in fact both companies barely a year apart received patents for erasers(2). Coincidence.......?  I don't believe in those types of coincidences. It seems to me that both of these companies although competitors must have worked together somewhat, or stole ideas, who knows.  I don't have all of the dots connected yet but I'm still on the case. 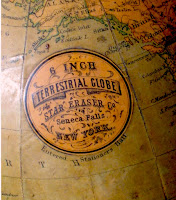 Here is another example of a very early 6 inch Star Eraser globe, notice under the cartouche the words " Entered in Stationers Hall" that is a sure sign of a Johnston gored globe as that is an English institution similar to our copyright office. This globe is dated to 1885 but that may be a bit optimistic. 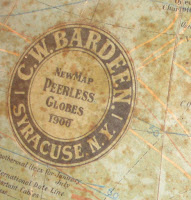 Incidentally Star is sold to C. W. Bardeen in 1905, they waste no time publishing their own globe for sale here is their cartouche dated 1906!
I believe that C.W Bardeen was at this early date using Central School supply gores also, continuing where Star Eraser left off. According to Warner, Central School Supply is where the Peerless "branded" globes originate(8).
So lets try and summarize all of this information,  Starting in the early 1880's there starts to be interest in globe manufacture in Seneca Falls.  During this time 3 seemingly separate but surely somewhat associated entities are involved in globe production either through authorship ( Flavius Cheney). Or through actual globe manufacture American Globe, and Star Eraser. Both of these entities are headquartered on the same street, a mere block away from each other. One sources gores in Edinburgh, then Chicago, the other in Edinburgh, then later from a competing Chicago firm.
So who produced globes first? American globe advertised globes as early as 1884, Star Eraser has a surviving globe from at least 1888, possibly 1885. Try as I might I could not find any advertising for Star Eraser company.  American globe purchases the rights to Flavius Cheney's globe manual in 1886, we know both companies were using W&AK Johnston to supply gores, at least initially, With Star and AGSS both switching to Chicago for gores, less expensive presumably. I find it interesting that both of these small companies were in the globe business before the much larger Rand McNally.
I want to make clear a distinction, concerning these two companies in Seneca Falls. For all intensive purposes they were making globes. Unlike many other school supply houses that bought finished products to resell, they made them just like Weber Costello did in the 1920's. They bought gores elsewhere but everything else was done in house so to speak.  These two entities manufactured globes just as surely as many other manufacturers did ; American Globe and School supply especially.  All of these firms outsourced various aspects of the process, but the end result was the same.
One thing that this Seneca Falls story does tell us is that globe manufacturing in the United States underwent profound consolidation from 1885 until 1905 resulting essentially in the big Chicago firms as the only ones standing. It seems that the stark reality was that if you transitioned to being a low cost producer, focusing on schools first you survived into the 20th century.  Think about the large east coast firms that all disappeared around this time Joslin, Schedler, Franklin, they all produced globes with heavy, ornate, or complicated mounts. They also sourced expensive English gores; All the while Rand McNally is making a better mouse trap with their wax engraving technique.  All of these firms seem to have suffered from a failure to innovate, and suffered for their missteps.  Chicago and it's proximity to shipping and to the growing west coast was going to win the day.

As always please feel free to comment below, I've managed to expose the tip of the iceberg with this post there is so much more I couldn't cover........