Seneca Falls NY is a lovely small town in the finger lakes region of central NY.  In globe related history this little town has quite a story to tell.  American globe and School supply company was based here from about 1890 until they were acquired by C. F. Weber around the turn of the century.  They sold re badged RandMcNally globes and they come around from time to time.  But there was a second company in this small upstate town that also made ( or at least labeled) globes for sale. Star Eraser company.  This company made a " dustless eraser" for chalkboards. They also sold a range of school supplies including globes.  I had the good fortune recently of acquiring one of their globes and it got me thinking.............. 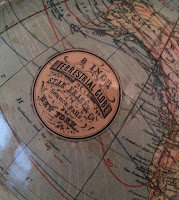 Were Star Eraser, and American globe and school supply related...?  What are the chances that such an out of the way place spawn 2 globe sellers....?   Would you believe that Seneca Falls actually spawned 3 distinct globe sellers in the waning years of the 19th century, but I digress, more on all of that later, lets learn about this gem of a globe first. 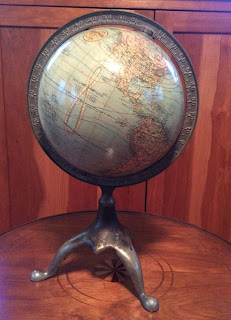 Star Eraser bought gores, or more probably mounted gores from W.&A.K. Johnston, they later sourced gores from Central School supply house in Chicago starting in the mid 1890's.  Then they did what many other school supply houses did and they stuck their label right over the Johnston cartouche.   This globe is fairly old, it is pre 1889 because the US geography shows a single Dakota territory, as well as the whole of present day  Oklahoma is labeled Indian territory.  The geography of Africa suggests an even older date, possibly 1885 but I have come to understand  that Africa geography was sometimes quite out of date, especially with globes for the American market. I'll need to continue researching the company to pin things down further.
So to be super conservative lets date this globe as an 1888, Star Eraser 8 inch student globe.  This would have been sold through a school supply catalog aimed at teachers and school administrators, this would have been a globe large enough to sit at the teacher's desk in the classroom, and be budget conscious enough to be purchased in quantity so that each classroom could have it's own.   The stand has the same basic tripod design and nickel plating as found on many school globes of the period.  You either got a metal stand like this one, or some manufactures offered a wood stand for a slightly lower price.  Interesting that today the metal stand would be less and the wooden stand would be more.
This globe stands 16 inches tall, and features a full meridian ring, but no horizon band.  The meridian ring is graduated only on one side, the other side just a plain flat surface.  The globe org is exceptionally well preserved, with many colors still rich, and quite a bit of detailing on the map surface.   The stand does show wear, some of the plating is worn, and there is oxidation as to be expected with the age of the piece.   I just love the look of this globe.  Art and Science mix perfectly here, a functional object that has a simple grace, warm muted colors, a familiar form.  Tell me this globe couldn't be at home on any bookshelf in any home and not look right....?   Add to that the history behind it and I think I have a new favorite!
Globes from Star Eraser are uncommon to say the least. Produced exclusively for the education market, and for only about a decade their scarcity is assured; two others are known. I'm sure there are more out there but this is a rarity for sure. 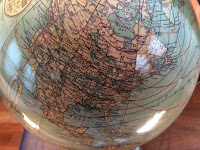 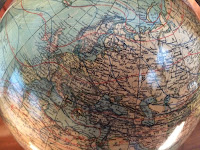 I purchased this globe the old fashioned way, that is to say I bid at a real live auction, no computers, no eBay, none of that. Now granted I bid by phone, but it was in the sale room as the auctioneer wielded his gavel. A surreal experience, nerve wracking to say the least.   I also had the good fortune of being able to attend this auction's preview so that I could inspect the item first hand. What a treat that was, I've been buying things online for so long I forgot what it was like to be able to lay hands on an antique object and really get to know it before buying.
That is the biggest downfall of buying anything online, you can't touch things.  Antiques are so one of a kind in nature there is a real value to being able to have a close up inspection.  I would have never saw the single Dakota territory and therefore would have never bid as aggressively as I did had I not laid eyes on the object before hand.
In an upcoming post I want to explore the three....yes three different globe entities that got their start in Seneca Falls NY it's quite an interesting bit of history for the globe enthusiast. A post 3 months in the making

May 27th update:  I have lernd a bit more about the Star Eraser Company,  they were active as early as June 1888 in Seneca Falls NY they were founded by two brothers Frank and William Hammer. Frank Hammer applied for a patent in June 1888 for an improved blackboard eraser he was granted a patent on his design in May 1889 patent number 402,925   Frank Hammer was born in 1861 making him 27 years old when that patent was applied for. This globe dates from the very first days of Star Eraser's existence, and in doing my research it seems that this particular globe is the earliest known globe to come out of Seneca Falls NY.   Quite a piece of history.
I also want to share a few images of another Star Eraser globe, a bit of an unusual example: 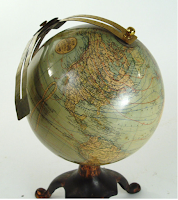 This globe pictured is with thanks to Doyle Antiques in Hudson NY  The globe is an 8 inch offset mounted globe, and there is a brass graduated ruler that encircles the globe presumably to plot distance, or longitude?  I'm very curious to know if this was something offered by Star Eraser, or a later addition. It looks very well made, My guess is that it is original to the globe, please any information chime in on the comments section! 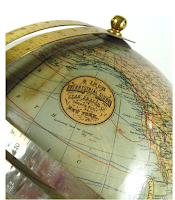