It's not always clear when you look at a globe and read the cartouche to determine where the globe came from and who made it.  Kinda counterintuitive isn't it?    Most branded  products we encounter are easy to identify.  if it says Apple or Samsung those companies designed and engineered and sold the product, if the car says BMW it was designed and engineered and sold by that one company,
Not so with globes, especially in America.  They were different.  For example I own a globe with gores made by GW Bacon ( U.K. ) then assembled by Weber Costello ( Chicago ). Finally sold by Hammond's ( NY )  So who made the globe?  Where did it come from?  Why was this done?   To what benefit?  Most importantly, how can we spot these subtleties?    Well let's explore together. 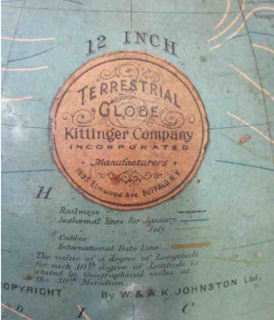 The case of Kittinger.  Kittinger furniture is a beloved American furniture brand, they happen to be based right here in my home town of Buffalo NY.  On a regular basis their globes come up for sale, the cartouche usually reads "Kittinger globe, Buffalo NY".  But they never made globes, not even close, they probably didn't even make the ornate stands that their globes came in.  Most everything they sold as far as globes was made by W and A K Johnson  ( Edinburgh). It was shipped to America, probably with the Kittinger label already in place.  Why do this?  Well quite simply if your selling high end home furnishings wouldn't it be great to offer a globe in a matching finish  to accessorize your new furniture?  Marshall Fields, and Wannamaker's did the same things selling globes on furniture quality  stands as home accessories in their furniture departments. This cartouche shows A rather decorative Kittinger label, even using the word "Manufactures"  but clearly below it states copywright by W. & A. K. Johnston Ltd. 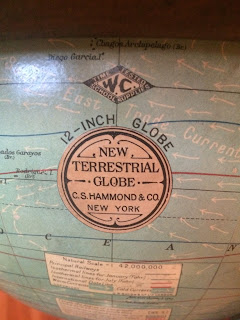 Ok so what about Weber Costello, and Rand McNally and Hammonds,  well at various times they made and re labeled for each other.   Here is one example from my own collection a Weber Costello made, but Hammonds labled globe.   As you can see to the left Weber Costello's manufacturing label is prominently displayed above the Hammond & CO Label that is affixed over the Weber cartouche.  So then who made this globe?  Weber Costello made this example, and Hammond bought the globe, re labled it and passed it into market as it's own.   This was common practice but  can become confusing 80 or 100 years later when we try to determine a point of manufacture.
Below I want to show another rather rare example of this practice.  Here we have a globe "manufactured"  by a school supply company  A. P. Mott & CO  but this is a total fabrication on the part of this school supply company.  Rand McNally made this globe in the early 1890's and they then sold it to many school supply houses, as well as retailing it themselvs, some of those companies saw fit to over label as their own and here we have an example of that in action.   When you look at the globe it is clearly copywright 1891 Rand McNally at the south pole, and if you look very closely the eadge of the original Rand McNally cartouche is visible peeking out on either side of the Mott over label.   So If I had to answer  who made this globe?  I'd answer Rand McNally, and sold by AP Mott. 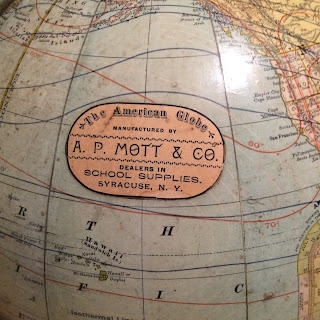 A few notes about collecting,  It is interesting to discover all of the different school supply, department stores, and furniture makers that did this.  It becomes more confusing because Rand McNally, Weber Costello, and Hammond, all made globes of their own, and also engaged in the practice of over labeling other globes. Then you've got the many school supply companies who manufactured nothing and were just middle men. And if that were not confusing enough. There were furniture companies and Department stores that did not manufacture the orbs, but certainly had a hand in the design, and sometimes the manufacture of the stand.


****A special thanks to Omniterrum for the picture of the Kittinger Cartouche, that particular globe is currently available here: Kittinger Globe  ****