A.H. Andrews globe maker?  Yes of course but that was a small part of this companies output.  A.H. Andrews was a school furniture powerhouse, desks, all manner of school supplies, auditorium seating, desks, both for students, and teachers, even church supplies. At their 1885 peak Andrews has offices in New York, Boston, and Philadelphia employing over 500 people (1)    Obviously on this blog I'll be concentrating on the globes and related apparatus, but it's important to realize that a lot of globe makers were also busy manufacturing a wide variety of semi- related items.
Andrews absorbed the globe business of the Holbrook school apparatus company in about 1865. You see Andrews worked for Holbrook initially (2)  They kept the Holbrook name for awhile, and gradually added theirs to the cartouche over time.  Andrews made globes as small as 3 inches, and as large as 30 inches, with many sizes in between. They produced an extensive array of globes for both schools, and the home.  Entering bankruptcy in the 1890's their globe business was purchased by C. F. Weber, later becoming Weber Costello. (2)
So Andrews produced globes for about 35 years, ending production 115 years ago, so they should not be too hard to find right?......Well wrong, the ephemeral quality of globes is easily demonstrated with Andrews. These globes in large part were produced, used by students, and families, then discarded. Having become outdated, or simply being damaged by a careless hand.
An excellent example Andrews globe is very high on my list of globe that I want to add to my personal collection. Really nice examples are very hard to find. I've come close a few times but just didn't/ couldn't close a deal. At left I want to show an excellent example courtesy of a fellow collector. This particular example in my opinion is Art, a sculpture really. The  proportions are just right,  the color, and the materials used all add a sophistication to this model.  I've been looking for one just like this for a long time. Patience........ It will pay off eventually.
Below I have assembled 4 photos from an 1881 A.H. Andrews catalog. These images are really fascinating, they show the extensive lineup of globes available from just this one manufacturer. Many of these shown on these old catalog pages are scarce, rare would not even do them justice, I have never seen an Andrews bracket mounted globe. What a spectacular find if you were to run across an intact example of one of those ( not to mention space saving to the collector!) . I fear that they were not hot sellers in 1881 due to their lack of portability and relative high cost. Few sold and fewer survive!  When looking at the catalog remember that these are prices in 1881.
Realize that in 1881 the average wage for a Carpenter was about $15 a week, a laborer $10 a week. 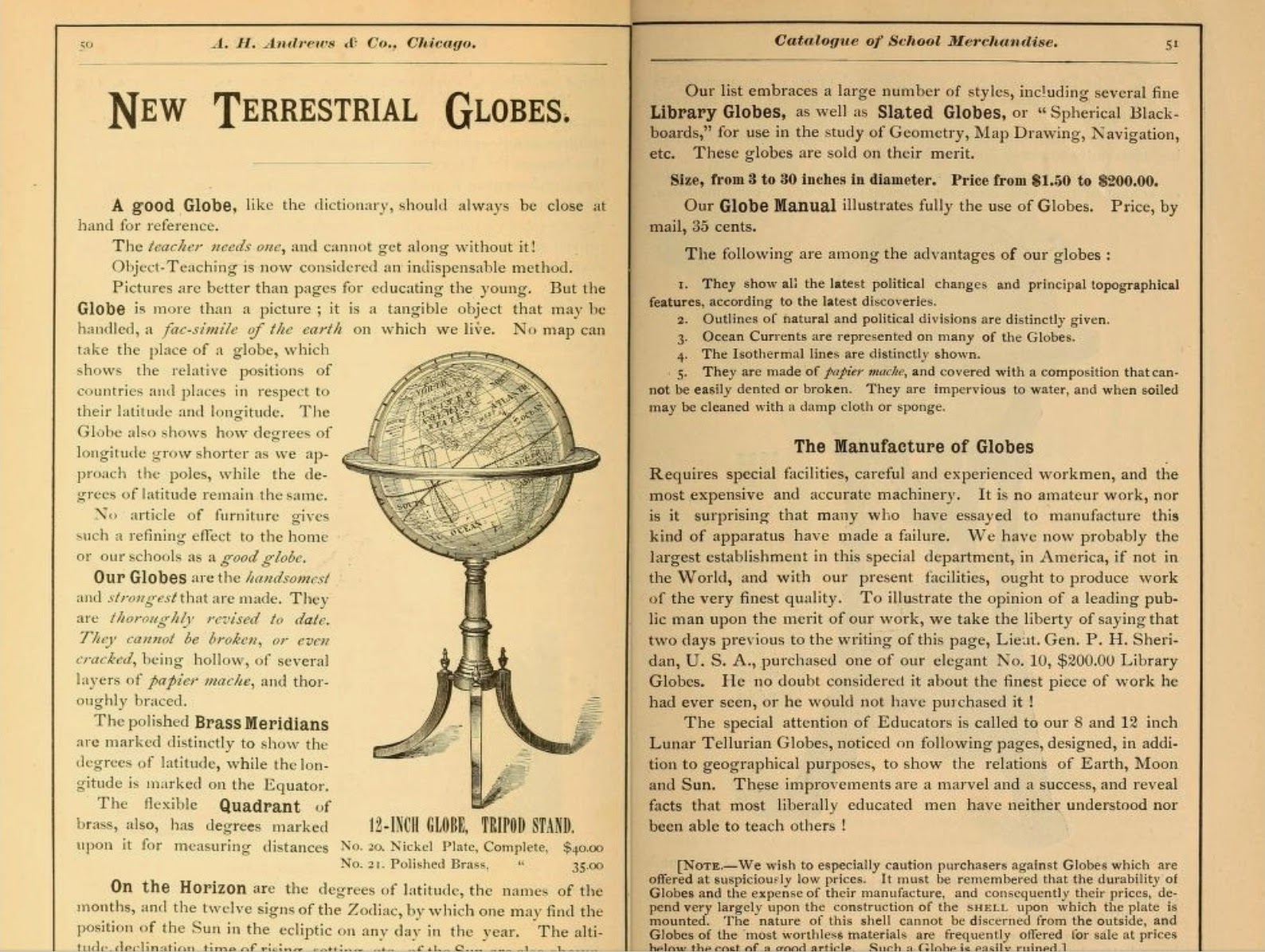 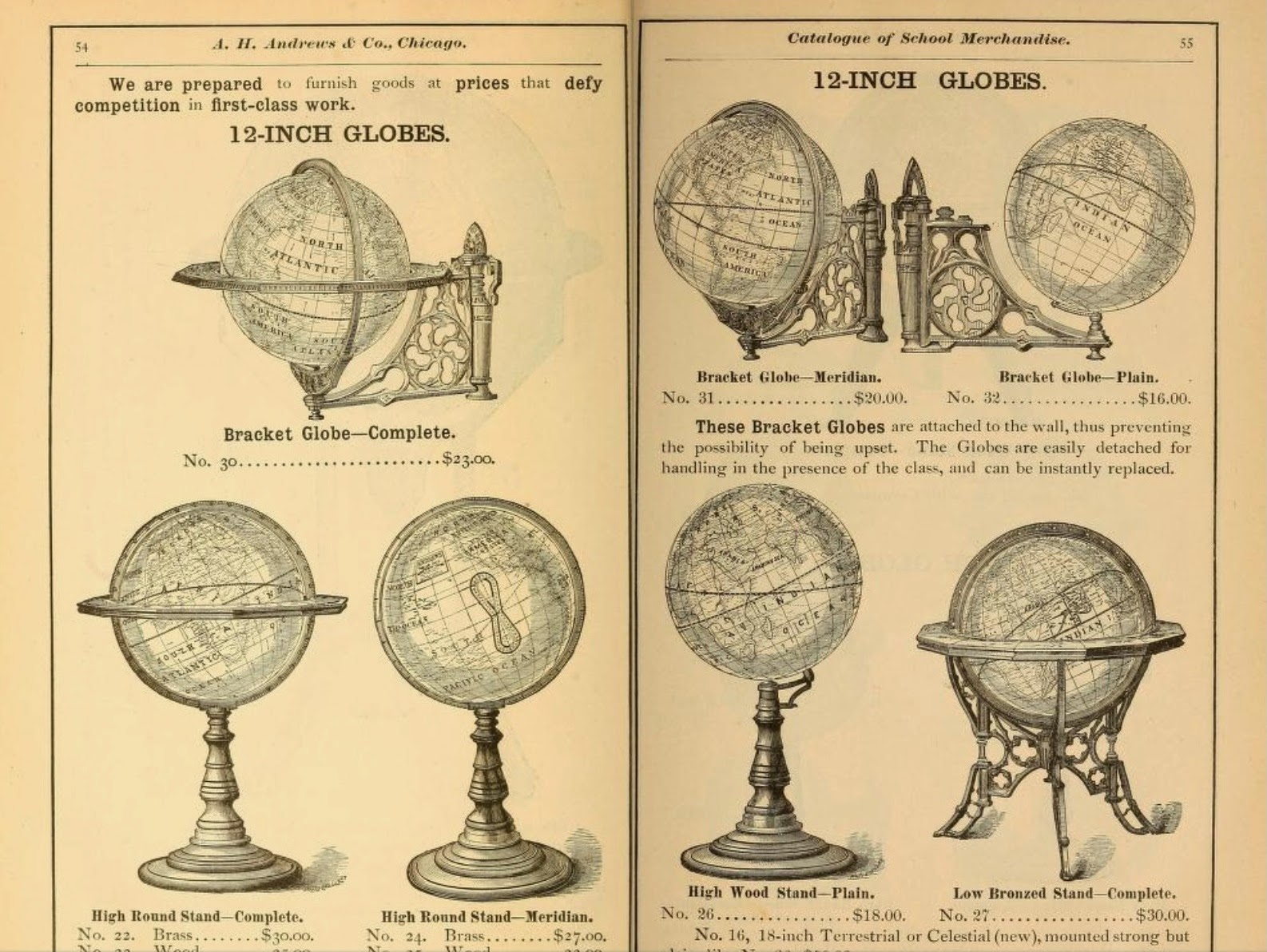 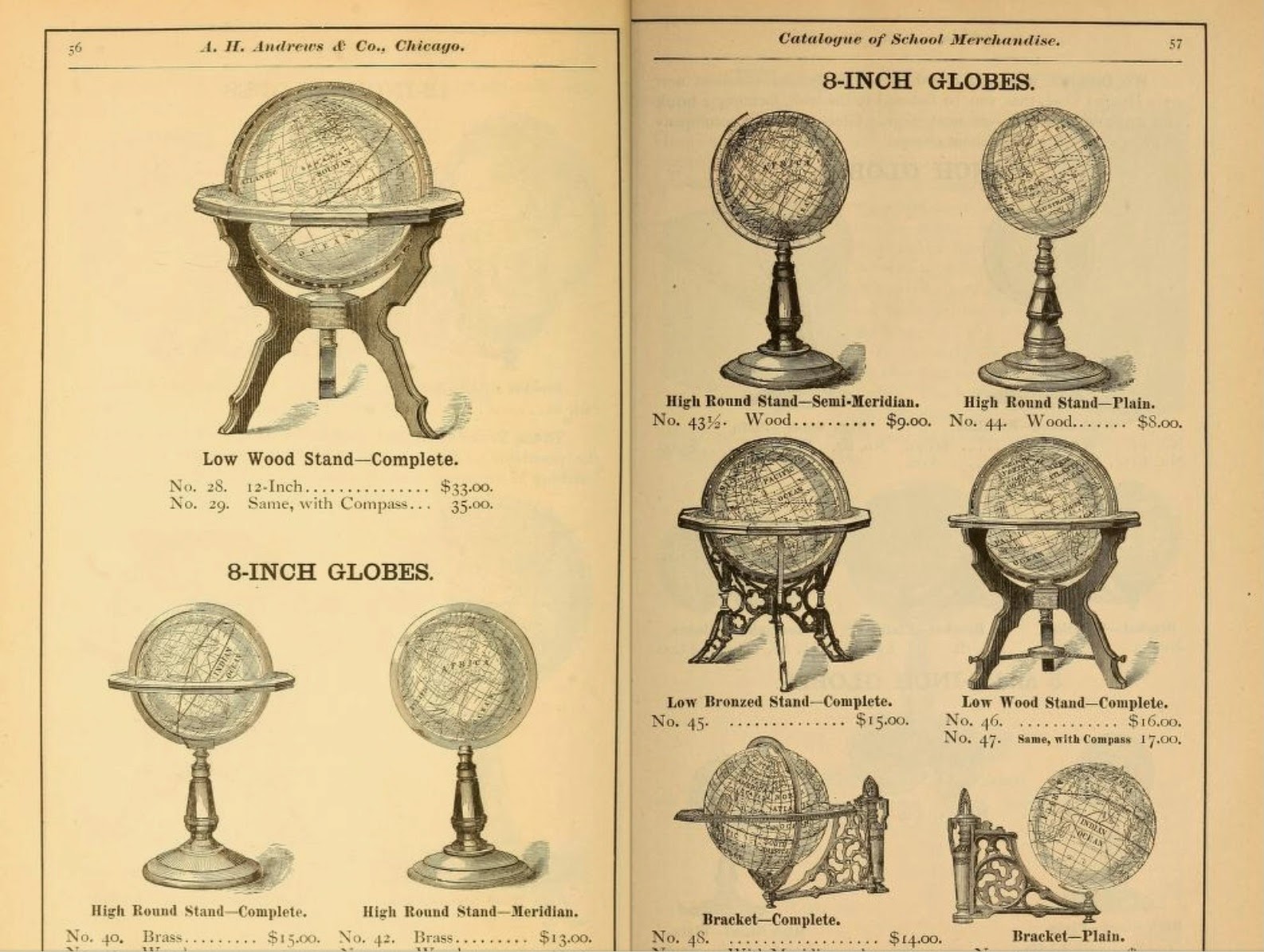 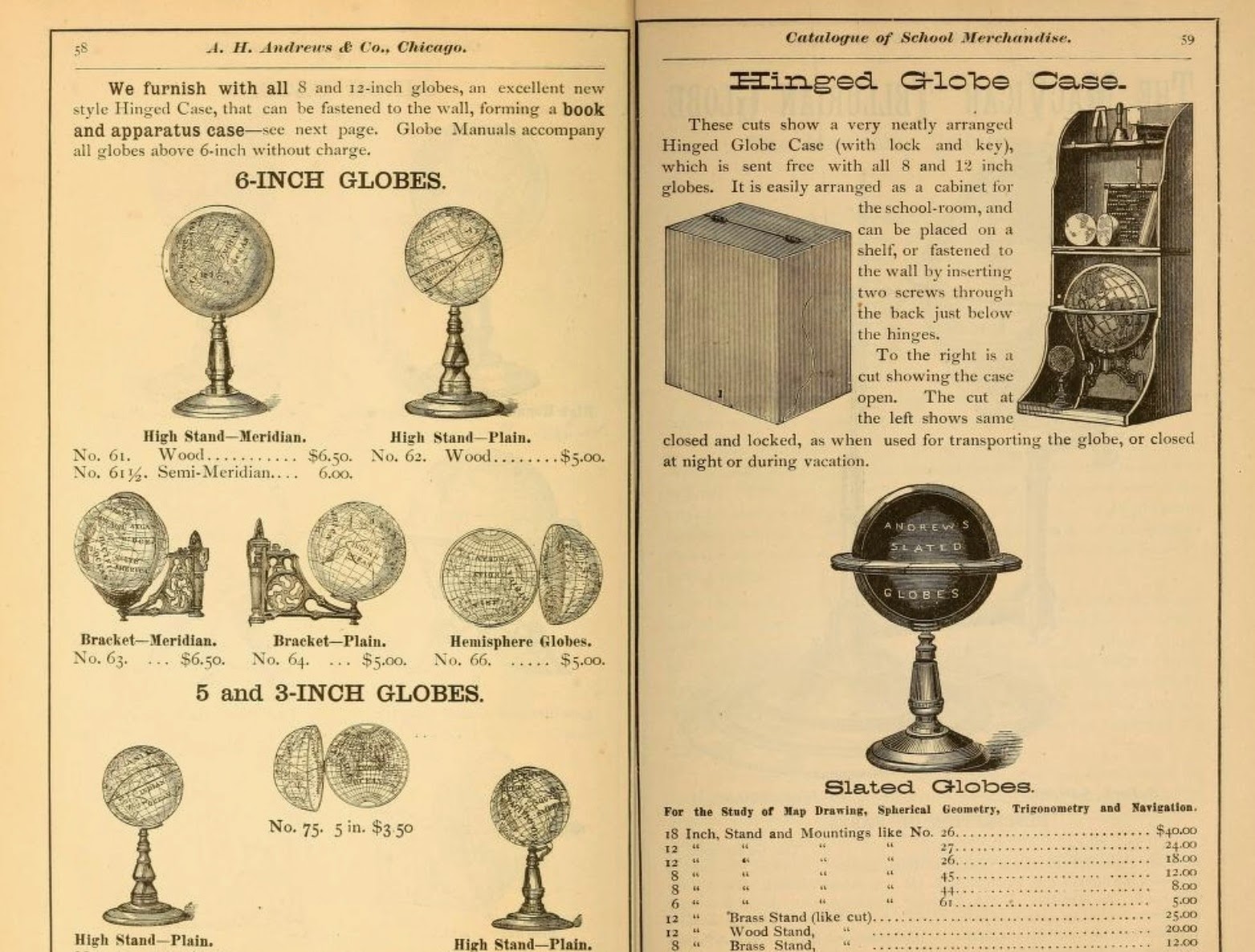 Andrews mainstay products were as mentioned, desks, chairs, chalk boards, and the like. With that said it is easy to see that the same people working with wood and metal designing those items also had a hand in the design of Andrew's globes, they produced some of the most ornate and otherwise well done globe mountings in their time. This example I want to show below is courtesy of Omniterrum and is a very early Andrews globe made only 3 years after the Holbrook transition. It can be more completely viewed here: 1868 Andrews desk globe   This A. H. Andrews really shows what this company was capable of as far as artistically displaying a globe.
Keeping in mind that in 1868 a $13 globe was an expensive endeavour, the individual who purchased this globe was fairly well off.  Most likely a member of an educated class, or a successful business person.  Just imagine seeing the complete world on your desk back then? What did those folks think about when they spun this sphere for the first time.    This globe manufactured in Chicago pre-dates our first transcontinental railroad by one year. Cross country travel via stagecoach was a 21 day agonizing affair!(3)  The world was a lot bigger than it is today, studying this globe had to be a mesmerizing experience for it's owner!

Andrews competed with Joslin, Schedler, and others to produce globes, at the end of their existence they contended with Chicago upstart Rand McNally who's own globes came on the scene in the late 1880's. Was Andrews the first Chicago globe maker? I suspect that they were, but I  don't know for sure. Lets try and find out together, if anyone knows just comment below.  I want to show two more globes that really demonstrate what made Andrews stand out.  Below is an 1890 12 inch desk globe with full meridian ring. There are two pictures a full look at the globe as well as a close up view. This globe is impressive because of it's incredible artistic details as seen in the close up picture. Notice the extreme attention to detail, the multiple colors on the map as well as the detailed ocean currents. All of this adds up to an incredible presentation. Just a beautiful map surface.  Also worth mentioning is the claw foot casting of the stand it is beautifully detailed to match the globe. Do you like this globe as much as I do? Well follow this link to Murray Hudson's web site to see a dozen more pictures: 1890 Andrews 12 inch globe

Last but certainly not least I want to show you a globe produced at the end of  A.H. Andrews' existence, an 18 inch desk globe.  Now if you've ever seen an 18 inch floor globe you know that an 18 inch orb is big. Probably bigger than you would consider for a floor globe in your home. Don't worry this globe is not going on the floor it's going on your desk!  18 inch desk globes are rare, impractical except in very unique circumstances. They were made as the very largest "desk globes" available from multiple manufactures. Now where would one find such a globe?  In a large conference room, or on the desk of a lecture hall in a university setting, or perhaps in a large library reading room, or someday at my house ha ha...  Just as when Andrews absorbed Holbrook they kept the name for awhile, so did C. F. Weber when they bought out the globe making portion of A. H. Andrews Co.  The cartouche shows this transition, as it reads Andrews globe by C.F. Weber successor to A. H. Andrews.
This globe is exceptional for it's size as well as it's beautiful turned wood base, it's marriage of wood, paper, and brass is wonderful. Shown here with thanks to Murray Hudson the proud owner of this colossus, please follow this link to learn more:  18 inch C.F. Weber desk globe 1895

Let me close with a few thoughts. Andrews as a company transitioned globe manufacture in this country from an east coast centered industry to one that from then on would be centered in Chicago.  Industrialization was happening. Westward expansion, and large immigrant populations were swelling our size, and the ranks of school age children.  A. H. Andrews went bankrupt in the 1890's and their various businesses were split apart and sold. Why did this happen?  I wish I knew, but C.F. Weber saw value in globes and other school supplies and carried this part of the business foreword.
At nearly the same time Joslin, with a 45 year history making globes ceases to exist, as well as Schedler. Both of these companies end globe production sometime in the 1890's.  Why?  lets find out together, chime in with some insight in the comments!
Finally someone reading this post is going to ask themselves Why did he write this? Why as a collector do I need to know any of this history? My answer is simple, how can you appreciate your collection without knowing it's history. Nerdy right...? Well you didn't get to the end of this article without being a bit nerdy yourself.....

***    A post like this does not get written without a lot of research, and a lot of help, I want to acknowledge, and say thank you to:  Omniterrum, Murray Hudson, An anonymous fellow collector, The American globe preservation society ( source 2) , as well as the encyclopedia of Chicago ( source 1)  And of course Wikipedia ( source3) ***
Posted by Kyle at 12:59 AM