Brimfield part one: On the hunt for globes

For those who don't know the Brimfield antiques show is a tri-annual event held in the tiny hamlet of Brimfield MA  about an hour and a half west of Boston, and 3 hours from NYC. My wife and I spent four days on the hunt for globes and related materials, as well as other items that piqued our interest.  Not knowing what to expect I kept an open mind as I traversed the show over the days.
Now would be a great time to admit that I am not very good at buying at antique shows. Why you ask? Well it's because of the Internet. Here's what I mean, I am used to sitting at my desktop, watching slow moving auctions, or viewing items on Fleaglass, or Ruby Lane then hitting Google to research past sales, study other examples of items, bounce questions off sellers, other dealers, and friends, over a period of sometimes days I decide to finally bid, make an offer, or purchase. Contrast that to a show, the advantage, the merchandise is right in front of you, allowing endless inspection, but a purchase decision must be made almost immediately. That's a problem for me because I'm an endless debater, he who hesitates is lost, truer words were never spoken.
I want to start off by showing a globe I should have bought.  Here it is offered for sale by a dealer who sold a wide variety of antiques including some globes was this, an 8 inch Rand McNally globe on a more unusual base, this base was available as a bronzed finish or this verdigris finish. The orb was in nice shape, few if any losses, no dents or missing map, and both poles were undamaged. Price $250, but more on that later.
So why is this globe not in my collection right now? Because I could not make a decision, I was not familiar with the base, I called an expert who's advice was " just buy it"  did I listen....no I did not. Do I regret it now.......yes I do.  Here's the rub, the dealer knew next to nothing about globes, in fact it was mis dated as 1920, I had to date it for him, and explain what he had, he then offered it for $200.  I countered at $175......why did I do this, I don't know, he wouldn't budge and hence the first mistake I made at Brimfield.....not to be my last.  This globe haunted me all week, I saw this dealer two more times. I should have just bought the thing, Am I in love with this globe? No that probably held me back, I own a similar orb and the green base just doesn't do it for me, but I could have and should have passed it on to another collector who did want it, that was my mistake.
Let me shift gears now and show a picture of a "globe dealer" I encountered, this man had 20-30 globes, and here's a picture. Now to his credit he had a tag on every globe, with the date, manufacturer, and price. His pricing was interesting, he had everything priced as if it were rare, hard to find, and in excellent condition, one example, the large floor globe to the right in the picture was being offered for $595, 16 inches and from the 1920's the problem?  it was in horrible shape, scratched and dented, as well as unsecured in it's stand, notice it listing to the right in the photo.  Many of the other offerings were common 1960's to 1980's items. 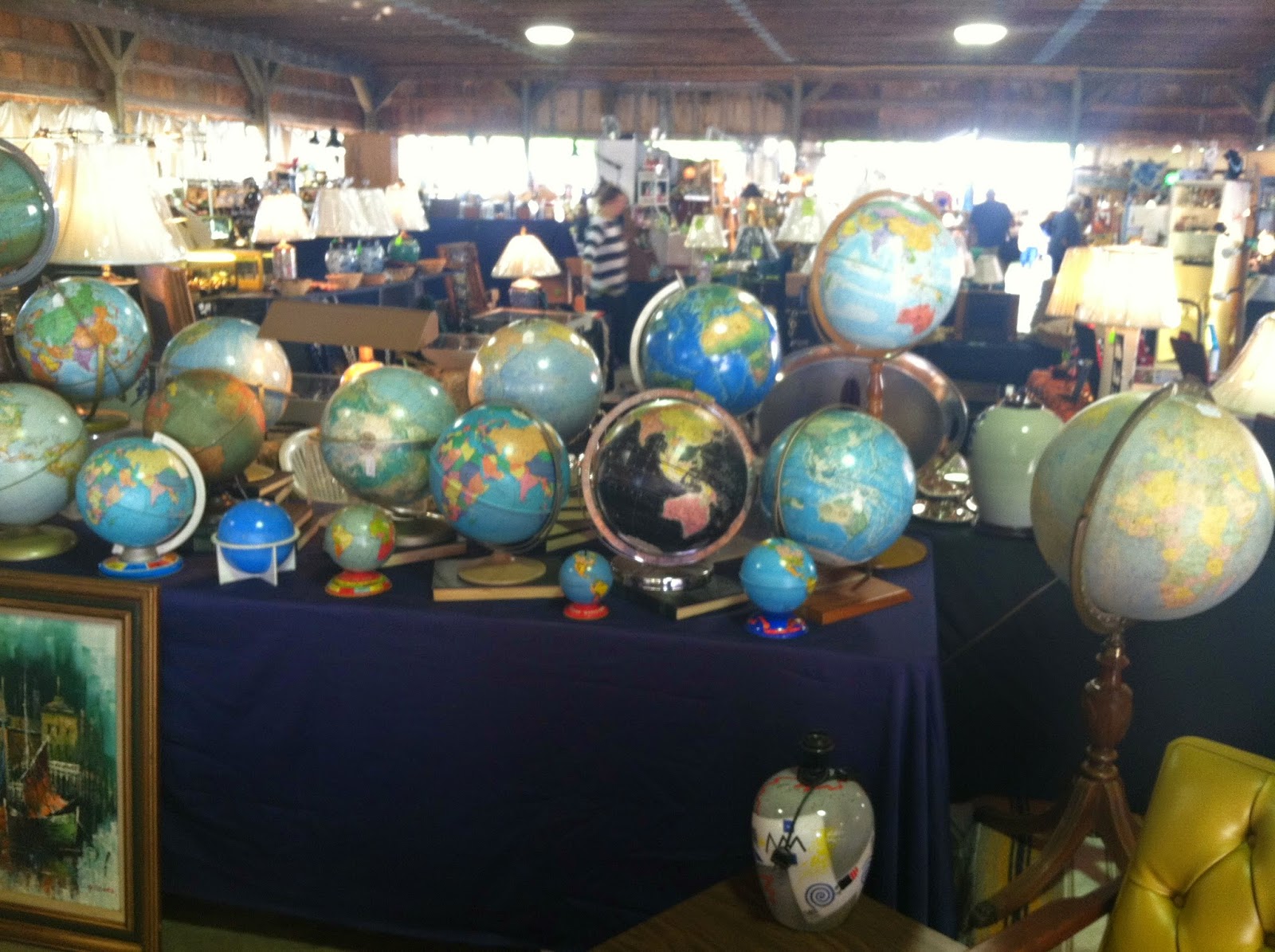 I want to share another globe I spotted, at a distance it looked promising, 16 inch Joslin table globe, bronze stylized base, full mount! This one was pressing all the right buttons. As I drew closer I saw that it was not in a condition that I was comfortable buying, the price reflected it's condition, and the dealer suggested it was not firm at $1750.  Correctly dated to the 1870's It was not a bad globe, just not right for me. Here is a picture, I have the contact info for this dealer if anyone reading this is interested.


I want to share one more picture of a dealer who's entire offering consisted of two globes, an 1890's Andrews 18 inch on an Empire stand, and an 1880's Schedler on a stylized iron stand.  Both globes were rare, but both had major condition issues the Andrews was missing map, and had darkened over time, the Schedler had a near perfect stand,and a VERY desirable stand at that! The orb however was darkened markedly, as well as showing some losses.  You know now that I think of it I don't think I've ever seen a Schedler globe in really nice shape, I'm sure they're out there but I have yet to run across one, and believe me I've been looking. I should mention the Andrews was prices at $6,500 and the Schedler was priced at $1,650.


Brimfield was a learning experience, coming up Brimfield part two. I will review the event itself, and offer some advice from my experience. I want to say that it was not a total bust I was able to purchase some really great items that I had not been able to find in the past.  So let's discuss, please feel free to email me or comment below!
Posted by Kyle at 8:56 PM