I want to explore this globe within the context of it's creation, and eventual purchase, because that is the real story behind this particular model.
First a short description, this is a Weber Costello full mount globe, 12 inches in diameter, 1930, some call this a furniture mount, also the gores themselves were printed by G.W. Bacon, of England.  Several globe makers of this period contracted out the cartography to another company this is an example of this as Weber Costello assembled the globe, mounting, and stand, but paid someone else to make the map. In this case G. W. Bacon of England. Globes made with Bacon gores are highly sought after by some collectors for their superior detailing, this globe is no exception.
This is an impressive globe in person, mainly for it's height it is a "desk globe"  but it towers over other similar models at a substantial 25 inches . It is also a bit different because it is built for home use not the classroom. This particular model would have been sold in a department store as an accessory in
the store's furniture department, or as an accessory in an upper end office supply store.  This was a luxury item.
So what makes this globe special?  Well to understand that we need to remember a bit of the history of the time. 1930 America was a bleak place, 25% unemployment, massive shifts in wealth are occurring, our social fabric is as frayed as it has ever been.  Unemployment then did not mean  an unemployment check, or any separation package, it just meant that you had money, then suddenly you had none!  Herbert Hoover is 1/2 way through what many historians later recall as one of the most failed Presidencies in our history.  The depths of depression.
So why is this important?  When I look at this globe, I have to ask myself who bought this item? Somebody strolled through Wanamaker's, or Marshall Fields, and saw this globe and decided, I need to buy this!  Obviously I've answered my own question, a wealthy person with disposable income bought this globe, ( a rarity in 1930 ) and they bought it to impress.  I could imagine a professor owning this, or perhaps a lawyer. I'll never know, but that's the beauty of this hobby. The globes follow the times, for the most part, but this model bucked the times it was probably a slower selling model than one of a less elaborate design.
The condition of this globe is very good, the finish on the base is a slight bit worn, but it is an original finish, the horizon ring is 90 % complete, there are a few small areas of loss, and the orb itself is in great shape, some minor imperfections but it would be hard to find a nicer one. I have owned this globe for about 6 years now, I acquired it from the specialist dealer Omniterrum. I have to admit I'm a real sucker for anything made of wood and metal together, there's just something about those two materials coming together that happens so rarely now but just works so well aesthetically. It's just a beautiful sculpture in it's own right, I just love it! Probably one of my favorites.   Just an FYI a seller on Etsy ( Upstarts )  currently has a globe with the same base selling in their store, it is not full mount but offset mount. Check it out to see another example of this globe, I have also seen this globe base used with a massive 18 inch orb in an impressive arrangement of a fellow collector.  This globe really shows off the skills of the Chicago globe makers at their peak.  In a future post I will explore, the Chicago globe makers at the very beginning of their dominance of the American globe market, stay tuned!  As always lets discuss! 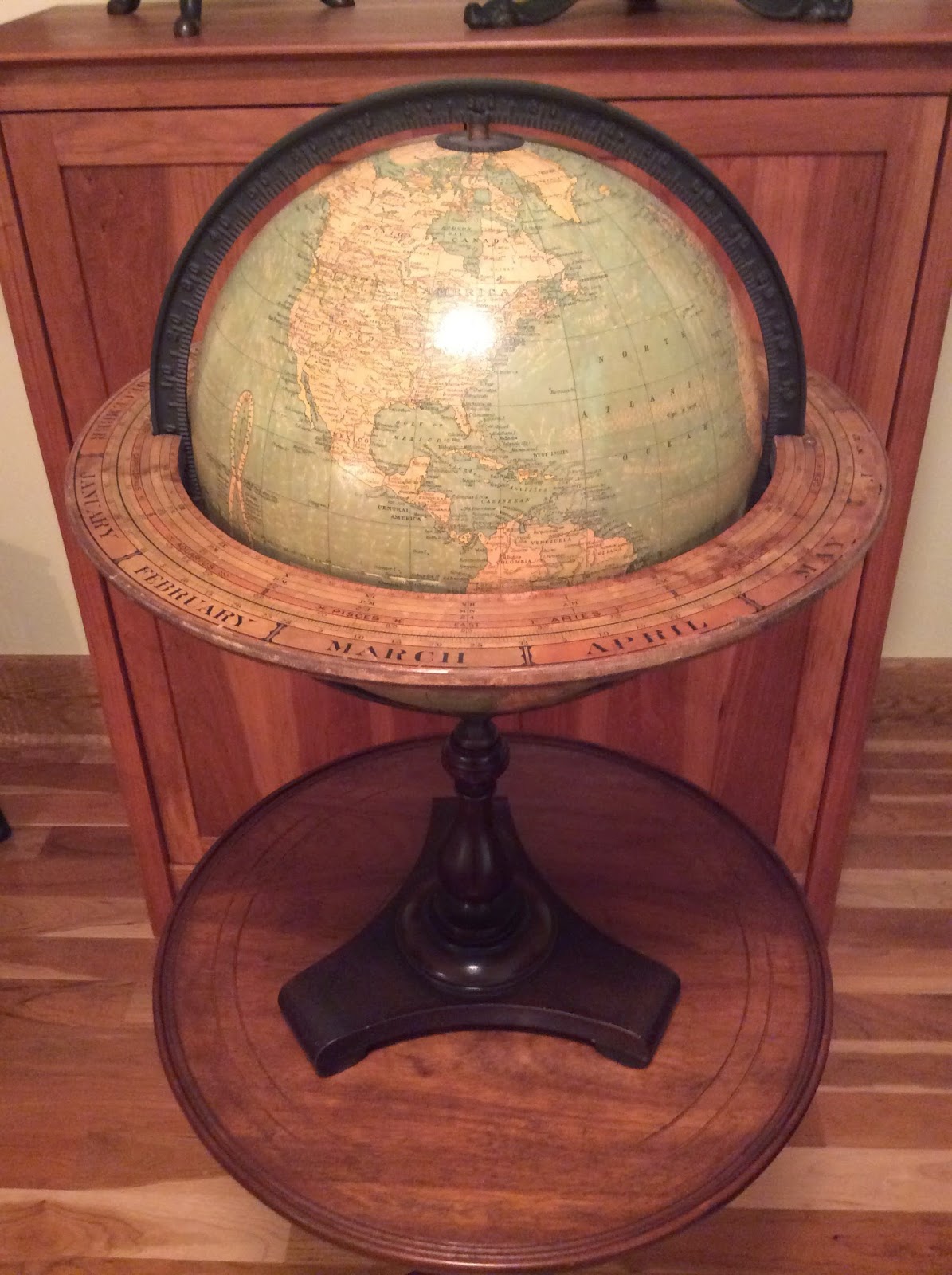